Giant global entities in various fields such as Airbus, Daimler, and Maersk are using blockchain for managing supply chain. Nasdaq and many global Banks have developed many use cases of blockchain in the financial sector. Many governments such as the UAE, China, United Kingdom, Australia, Singapore etc. have already embarked on blockchain initiatives to hedge the future. Using this as a benchmark, Malaysia would not be alone in the learning curve about blockchain.

Why should Malaysia venture into blockchain technology?

We are living the time where the rate of change is accelerating, not just due to the transformation into a digital economy, but one where constant disruptions in economic, political, technological, and social trends favour an increased volatility and complexity in the way we manage our lives, current and future. In many ways they force us to look into the ambiguities in a new perspective, and find new ways to hedge in our favour. 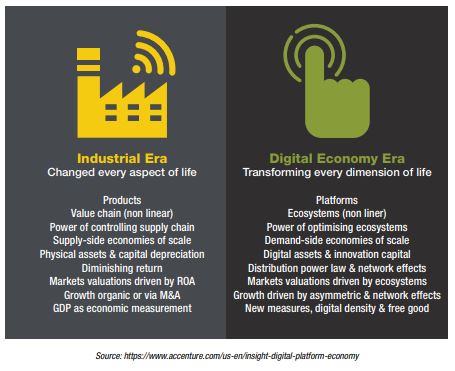 The rise of collaborative or sharing economy is one of the examples of this trend. With Uber and AirBnB being its frequently quoted current successes, the proliferation is expected to intensify. The resulting rise in the opportunities for new business models and the transformation in the relationship between the stakeholders – from producers to consumers – will increase the need to inspect the elements and to manage the impact by the stakeholders, including governments.

Looking from the industrial perspective, the rise of platform economy offers another example on the inevitability of global transformation towards digital economy. Companies such as Google and Alibaba, capitalising on the new technology platforms, are driving the global economic changes by creating new value through new business models and shifting thinking model from products to platforms. 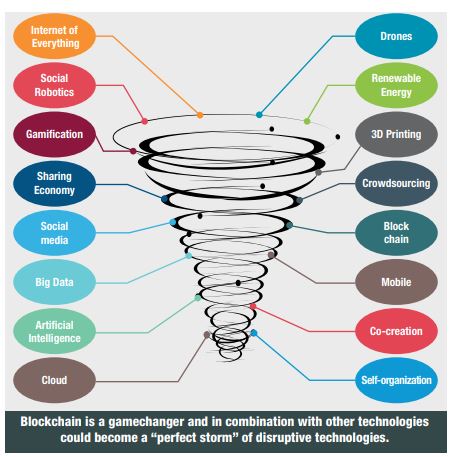 The emergence of Blockchain technology closely reflects this accelerating transformation into digital economy. First appearing as the technology underlying Bitcoin, a cryptocurrency, the development came to be known as Bitcoin 1.0, which involves the deployment of cryptocurrencies in applications related to cash. The second phase or Bitcoin 2.0 revolves around contracts, including the better known smart contracts applications, while Bitcoin 3.0 targets blockchain applications in other areas, including industrial applications in the ‘collaborative economy’.

The close relationship between blockchain and Bitcoin in the early part of blockchain development has frequently led to the wrong perception that they are synonymous. Infamous cases involving Bitcoin, including the anonymous online marketplace Silk Road and the bankruptcy of bitcoin exchange Mt Gox in 2014 went against the perception of Bitcoin as a potential and reliable currency, and slowed down the understanding of blockchain as a separate and potential platform beyond bitcoin.

But blockchain the technology received accolade as a game changing technology in the World Economic Forum’s report Deep Shift: Technology Tipping Points and Societal Impact outlining the expected changes in societies enabled by software technologies. Blockchain began to live a life of its own beyond Bitcoin. The tipping point is expected to take place when 10% of global GDP is stored on blockchain technology.

In reality, the developmental phases of blockchain are not moving in linear progression or independent of each other. Currently, innovation in this young technology could be identified by the major players in the form of foundation (e.g Ethereum, NEM), consortium (e.g. Hyperledger) and consulting companies (e.g. Deloitte, Accenture), but as new use cases are being developed, thousands, if not millions, of minor and  major innovation in this ‘public’ and peer to peer space are shaping the future that we have yet to witness.

Perhaps one of the more compelling reasons for Malaysia to explore blockchain is reflected in the trend depicted below. Blockchain joins the list of new technologies and social innovation that are disruptive on their own. Some of these technologies reflect the trends – sharing economy, hyperconnectivitiy, decentralisation, connected devices, bigdata economy and addressing trusts – that support blockchain as a gamechanger. When these technologies combine – between IOT and blockchain, for example – they would become a different entity and that’s even more powerful. Deloitte calls it a ‘perfect storm’ of disruption.

Understanding the impact of these individual technologies, including blockchain could help industries as well as the country to manage the impacts of this trend.

With this as the background, Malaysia needs to consider on how best to capitalise these developments and creating a niche for itself in the blockchain ecosystem.

Currently, even as more countries are opening up to the potential of blockchain for fintech and beyond, in Malaysia itself, and sadly for many in the public space, the word ‘blockchain’ is still considered equivalent to ‘bitcoin’ and quietly equates it with the dreaded ‘get rich quick schemes’. Just like similar schemes involving fiat money before bitcoin, they thrive on ignorance. One of the ways to avoid this pitfall then is to be aware that they exist, and adopt the ‘caveat emptor’ (buyer’s beware) attitude. Another way to help avoid such scam in Malaysia is by  checking by the alert list prepared by the Central Bank, Bank Negara Malaysia, online at http://www.bnm.gov. my/documents/2017/20170224_FCA_ENb.pdf

The technology, first growing in the developers’ communities, is very much driven by collaborative efforts. For it to be a mainstream technology, not only the technical capability, but the collaborative efforts involving the developers’ communities, commercial organisations as well as the users, which could be private or public, must also be scaled up. For Malaysia, the government plays a key role in complementing the efforts by the industry.

In Malaysia, “the government has always been one of the key champions in developing high technology industry,” said Datuk Dr Mohd Yusoff Sulaiman, the President and CEO of MIGHT at the recent meet with Andreas Antonopoulos. He was talking from MIGHT’s experience in developing high technology industry by providing foresight inputs and deploying its private-public collaboration platform. It underlines Malaysia’s efforts in exploring blockchain.

There is no firm policy on blockchain for the country as yet. But increasingly, besides the industry, the government is joining a growing list of global government organisations exploring use cases for blockchain that can impact their jurisdictions. For example, on the regulatory side, Malaysia is one of the pioneers and one of the 17 participants for the setting up of ISO/TC 307 committee for Blockchain and electronic distributed ledger technologies.

There need to be more involvement for blockchain to make an impact for the country, and Malaysia is not late. Should Malaysia become one of the early mass adopters, it could look at the Trailblazers’ early foundational investments – asset management, identity management and regulatory compliance – as indication about applications that might be first to market that serve to support the blockchain ecosystem.

On the industry side, in Malaysia, the number of local blockchain industry players is still small, and the following are non-exhaustive examples of pioneering initiatives of current players. 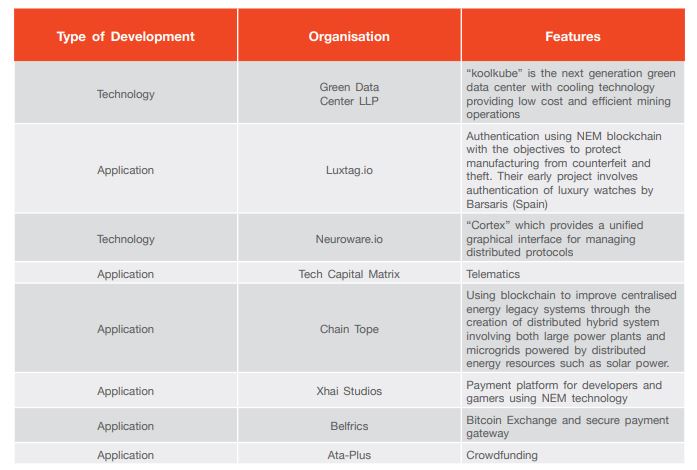 This is a good indication for a new industry. The strongest indication provided by this list is that Malaysia is not starting at zero, and these players have been resilient enough to have survived with workable initiatives to become the early seeds of blockchain players for Malaysia. Some of the early industry interests in blockchain were catalysed through support by government link organisations such as MaGIC and MDEC for start-ups. As the use cases start to cross industry sectors and government on a bigger scale, many more nodes in the country, from the government, industry, research  institutes, human capital bodies as well as the public need to be mobilised to create a thriving and impactful blockchain ecosystem.

For an industry based on collaboration, partnership between industry and government would be the next logical step in exploring and facilitating the venture into the blockchain technology. 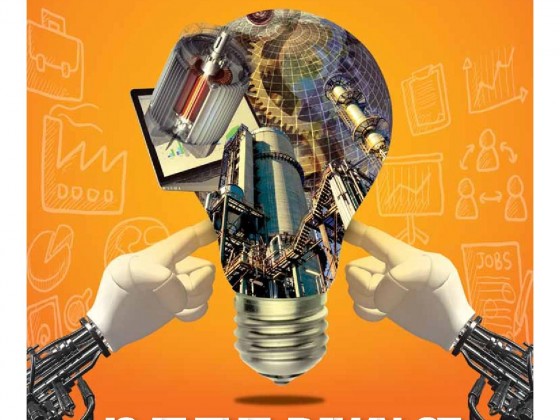 Is It the Dawn of Industrial Revolution 4.0 in Malaysia 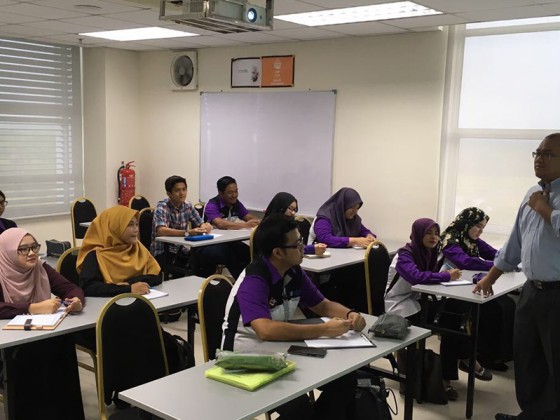