The world as we know it is rapidly changing in terms of economic, political, and social development, thanks  to the advancement of technology as one of the major contributors. In this article, we will look into the Future of Work—a complex new buzz term that is directly correlated to how we do things in our lives as most of our time is spent on working—with a special focus on where women stand in the global workforce of the future.

Whether in household or workplace, women are still not given an opportunity equal to that of men to thrive and succeed. According to UN Gender Statistics Report 2015, although the education gap has been
narrowed significantly, in other areas, not much progress can be seen. The current world labour force comprises only 50 percent of women compared to 77 percent men.

The 2016 World Economic Forum Report highlighted the gender gap in four key areas: namely health, education, economy and politics. According to that report, Malaysia ranks 106th out of 144 countries, proving that strategic efforts need to be undertaken to close the gender gap. As of 2016, there were a total of 14.7 million workers in the workforce in Malaysia, with almost 8 million of the workers being female. A direct data comparison shows that this  number is an increase of 0.2 percent from the previous year.

Half of the population of women in Malaysia eligible to work are still not in the workforce, despite the government’s effort to encourage more female participation. Although significant progress has been made for the past six years and there are more women in the workforce compared to thirty years ago, the gender gap is still comparatively wide. Women are still finding it difficult to break the glass ceiling partly due to gender stereotyping in the workforce that hinder them to perform better. Overall, women are still far from having an equal voice to men in public and private spheres, and are still subjected to various forms of gender disparity. 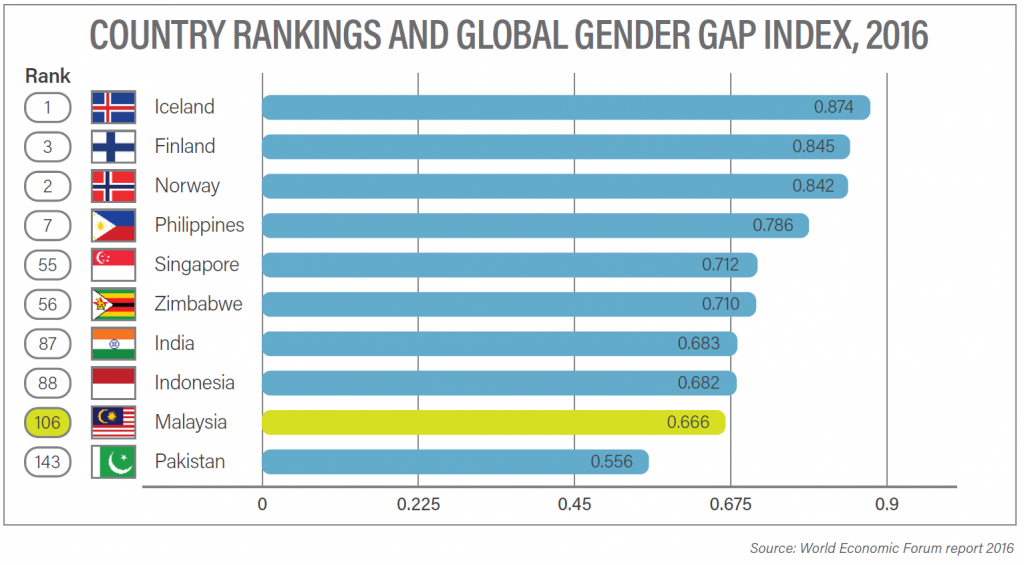 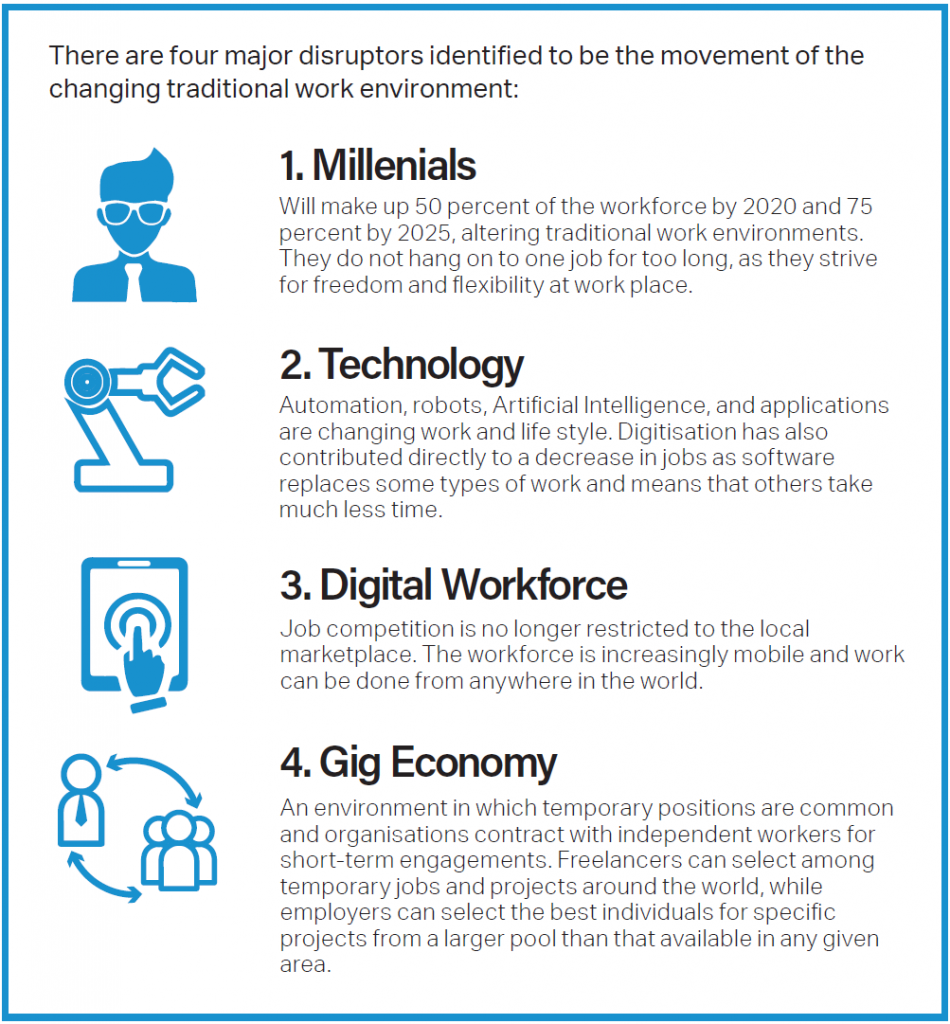 How will these disruptors affect the global workforce? Due to technological change alone, the human workforce is facing the imminent reality of 2 billion jobs disappearing by 2030. A research study by Oxford University found that 47 percent of all employment (80 million jobs in the US and 15 million in UK) is threatened by technological unemployment.

These top disruptors definitely post challenges for everyone in the workforce especially women. After all, women are already currently being marginalised in the traditional work environment with most sectors still struggling with gender parity as well as the prominent lack of female presence in major industries.

Further analysis by the Organisation for Economic Co-operation and Development (OECD) shows that automation is expected to spread across most sectors and occupations, affecting both men and women. Some large industries with high shares of women are at a high average risk of automation; e.g. food and beverage service activities, and retail trade. Women working in education, social work, and health care sectors are faced with lower risk of job automation but are facing a high risk of being displaced in the future.

However, many believe that the ongoing digital transformation will strengthen the position of women in the labour market. More flexible ways of working may make it easier to combine paid work with caring responsibilities, which are still more often taken on by women. Women now are free to work from  anywhere, anytime without having to commute to the workplace. At the same time, digital nomadism and telecommuting provide a greater platform for women to network and collaborate globally.

The benefits of flexible working are often focused on improving women’s work-life balance, as well as looking after their  health and wellbeing. Nevertheless, it is important that careful thought is given on the suitability of different forms of flexible working in the organisation. A poor balance between work and life responsibilities may lead to stress, lower job quality, and higher job turnover among working women. Some managers may also find it difficult to communicate with  remote workers and to develop trust within remote team members. If an employer helps their female employees to balance their work and home life, this can be  rewarded by increased loyalty and commitment. They may also feel more able to focus on their work and to develop their career. 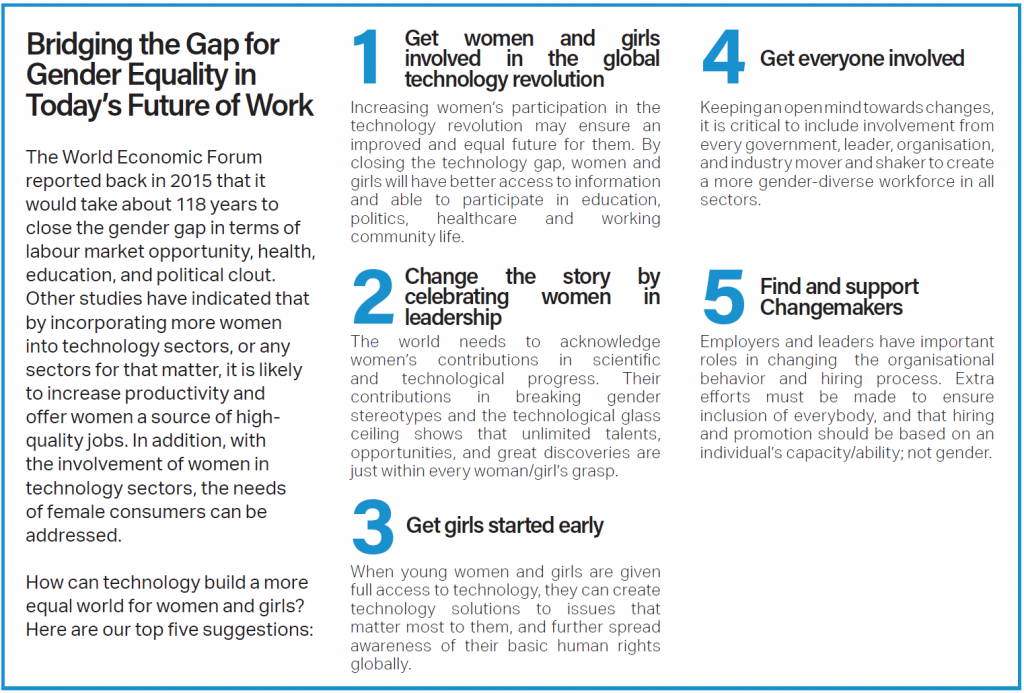 What Does the Future of Work Hold for Women?
Just as many studies and reports suggest; a more gender-inclusive political system may lead to better policies for women and girls, and integrating women into corporate boards may mean reaching new consumers, hence resulting into higher profits.

When the potential of women in workplace is suitably tapped, the economy will thrive. When women are given the chance to be the change agent, gender disparity can be eradicated. It is calculated that women could increase their income globally by up to 76 percent if the employment participation gap and the wage gap between women and men were closed. With the combined strength of men and women, business and country can achieve so much more.

The future is being automated as robots and computers are taking over the jobs.  Inclusion efforts are more pertinent than ever to ensure no one is left behind. There are hopeful signs that more women are taking the lead in the world of technology. However, keeping this momentum going is not an easy task for all parties. Most importantly, women around the globe must remain optimistic that changes are coming, going in their direction. They just need to hold on tight, and be ready to be inspired to lead the future! 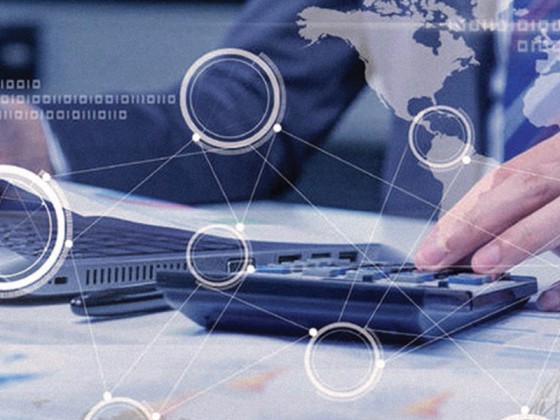 Riding the Wave of the Future with Youth: The Infinite Possibilities