VIDEO GAMES AS A SPECTATOR SPORT (Click for more)

The growth of the Esports industry

Currently, the highest prize pool for a single Esports tournament is held by an event called the International. It is the world’s biggest tournament for an online multiplayer game, Dota 2. The tournament takes place every year since 2011 and offered a prize pool of $1.6 million in its first year. When the first edition concluded, the championbagged home $1 million from it. From 2011, the prize pool for the International has only gone upward year after year in line with Dota 2’s growth. And in 2018, the tournament’s prize pool had then reached a staggering $25 million. All this adds up as the largest cumulative prize pool compared in comparison with other tournaments like Daytona 500 ($15.5 million) or the U.S. Open golf tournament ($12 million).

For gaming, certainly, this is a moment of trend convergence. Professional Esports leagues are growing more popular and more serious, as evidenced by the huge prize pools paid out for single games. Today, these numbers have snowballed to about $571,920,232.83 over various Esports tournaments and games played since 2011 around the world.
It was inevitable. The coming few years will see Esports’ revenues surge exponentially. In 2020, the global Esports market was valued at just under one billion dollars. According to estimates, global Esports market revenues will reach almost $1.6 billion in 2023. A huge chunk of these revenues come from sponsorships and advertising. Meanwhile, the rest will be generated from media rights, publisher fees, merchandises, tickets, digital and streaming. In this respect, Asia and North America account for two of the largest Esports markets, while China alone is about one fifth of the market.
Granted, Esports is a growing industry with a big revenue potential. Much of this is powered by the sports’ growing audience. In light of this, a number of countries have started to support the industry. In the United Kingdom (UK), its Department for Digital, Culture, Media & Sport (DCMS) has formed a committee to explore the industry’s potential among other tech trends. The DCMS committee is interested in studying Esports’ impact towards virtual reality (VR) and augmented reality (AR) in the future. In China, the country’s Ministry of Human Resources and Social Security (CMHRSS) announced two new professions in the country—Esports professional for players and Esports operator for those who organise Esports tournaments and events.
At the same time, Esports’ development in Malaysia has also come to shape. As part of the national plan to embrace the 4IR, Esports has been viewed as a key digital industry by the Malaysian government. Given Esports’ growing popularity, Malaysia’s Ministry of Communications and Multimedia now regulates the Malaysian National Creative Industry Policy. No less significantly, the ministry has identified the gaming industry as one of the ten main categories of the creative industry. Central to this is Malaysia’s Ministry of Youth and Sports’ Esports’ initiative called the Strategic Plan for Esports Development 2020-2025 announced at the end of 2019 in a bid to nurture local Esports athletes.
As part of the strategy, five prioritieswere outlined: 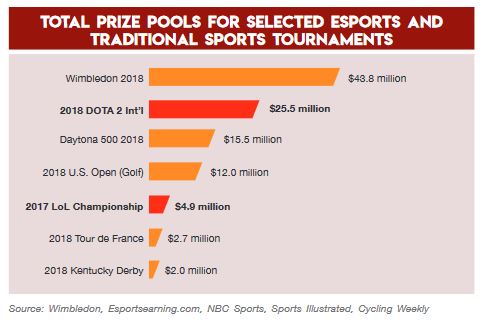 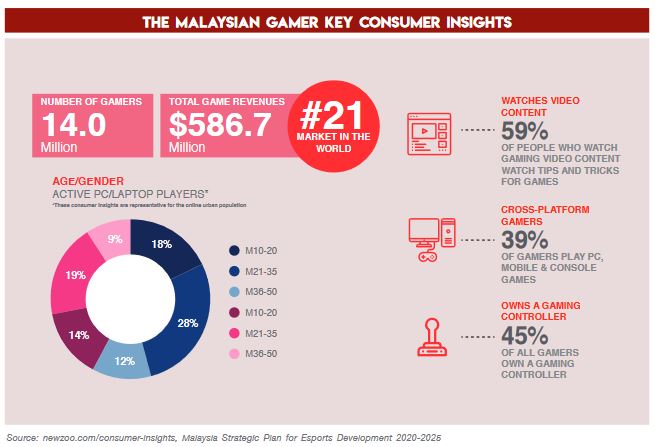 Prior to this, RM10 million had been allocated by the Malaysia Digital Economy Corporation (MDEC) in 2018 to develop Esports. The announcement was made at Malaysia’s Budget 2018 tabling and the fund was managed under the watch of Malaysia’s Ministry of Youth and Sports. One of the local circuit’s sponsors is the CEO of Razer, a gaming hardware company, Min-Liang Tan. Following the announcement, Tan commended Malaysia’s effort to develop the industry and was reported to invest RM10 million himself for the cause to create more opportunities for Malaysia’s youth in Esports.
Similarly, corporate players too have weighed in on Esports’ development. AirAsia’s Allstars Esports Club president, Allan Phang, for example, said that the company’s first foray into Esports was aimed at supporting the region’s top talents. Since, AirAsia has partnered with Team Saiyan, a top-tier professional team which later rebranded as AirAsia Saiyan at the ASEAN World Electronic Sports Games (WESG).
Sports leagues turn their attention to Esports and its young fans
As the industry grows, so will its audience. This is a trend that has been picking up steam over the last few years. Based on recent The Statistics Portal data, Esports is watched by an estimated 173 million viewers in 2018. This figure was then expected to reach 201 million viewers in 2019. Today, the number is expected to be around 395 million. The parallels are there in numbers and as a result, Esports’ value is expected to grow 15% to USD454 million in 2019. Notably, the number of Esports viewers keeps growing every year, springing its growth even further.
There are plenty of reasons why people watch Esports. A large majority of Esports viewers watch the games because they want to improve their playing while some simply derive genuine pleasure from watching others play. As evidenced by Magid and Battlefy’s survey, 89% of viewers said they watched the games to improve their playing, 83% said they liked watching the games being played at professional-level intensity and 58% said that they liked the community’s culture. At the same time, 49% said story highlights of Esports’ teams and players were compelling and 40% said they liked the high-stakes rivalry between teams. In general, viewers find Esports’ competitive culture an immersive experience—almost like watching real life games.
When it comes to sports, in most circumstances, men are more dominant. However, in Esports, physical attributes matter less as a key factor for success. Yet, the industry is still divided by gender. Although today the majority of Esports’ players are males, the number of female players has been growing and we are expected to see a considerable growth in coming years.
According to a report by Interpret, a global market researcher, Esports’ audience for the female demographic grew from 23.9% in 2016 to 30.4% in the fourth quarter of 2018. “Changing behaviours among a large segment of people is difficult. Progress of this size always takes time; however, a gain of 6.5% in gender share over a two-year period is a trend that is heading towards the right direction”, said Tia Christianson, the vice president of research for Interpret in Europe. 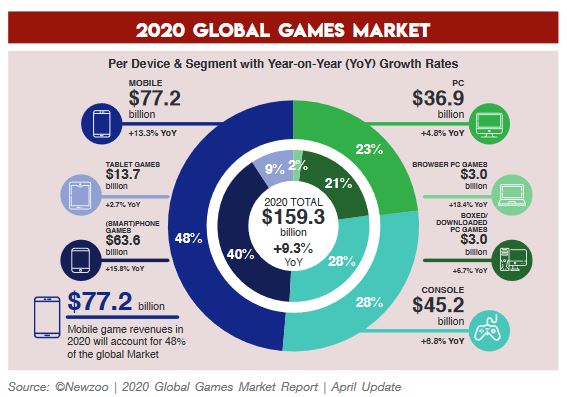 The number of Esports fans globally is expected to increase by 59% in the next five years. This increase will be driven by many factors. It is now commonplace for Esports teams to get sponsored by traditional sports leagues and earn broadcast deals as teams are beginning to look to esports to engage with new fans. Besides increasing revenue streams, many businesses are starting to see this development as a huge business opportunity.
Video games taking over the real world
The gaming industry has innovated many upgrades to computer hardware, bandwidth, mobile internet and so forth. This has made top games more accessible across a wide range of devices and platforms, for example, mobile phones, tablets and PCs. So much so, Esports’ multiplayer video game competitions are forecast to grow over $1 billion in revenue in 2020. In relative terms, Esports’ business models closely resemble professional sports—though competitions are far more fragmented with the majority of its revenues coming from advertising and broadcasting. Although still relatively small in comparison with the overall gaming market, Esports remains relevant because the industry positively contributes to many aspects of gaming’s growth.
Interestingly, watching gaming live streams and on-demand videos has become about as large as gaming itself. During COVID19 lockdowns, these activities increased dramatically largely because of two factors, a new found free time that’s now available to the masses and their need for social interaction, which gaming engagingly provides. This said, not even gaming is immune to the coronavirus. Esports, with its reliance on live events, has been one of the first sections of the industry to be affected. As things appear, most Esports events have been cancelled or postponed, though some took place without an audience.
Directors, producers, broadcast engineers and professional gamers are all working remotely to recreate the excitement and quality of live events. Esports has been able to continue while traditional sports have not because the playing field is virtual and can be replicated online. However, nothing can truly replace the social vibe of a live-action spectacle.
Having gained more traction after COVID19’s rampant outbreak, sports leagues around the world have since turned to Esports to find new ways of engaging with fans. Several Esports competitions are now shown live on TV, as broadcasters look to fill hoursof scheduled sports contents that were cancelled as a result of the pandemic. Case in point, NASCAR was quick to augment cancelled events with its iRacing Series, with one event attracting close to 1.3 million viewers. Despite the fact that Esports’ revenues may have declined, the sector’s value has risen rapidly, thanks to its low-cost marketing during the crisis.
Esports as a career
Currently, there are two Esports categories. One is the individual category and two, the team category. Team games such as Dota 2 and Counter Strike Global Offensive (CSGO) are some of the most demanding and boast highly professional teams assembled by worldwide talents. As such, the Esports industry has grown exponentially and is now one of the most sought after careers by today’s youth.
Evidently, many youths seek out Esports as a career because of the perks that sports offers. Today, it is no secret that professional Esports players earn up to millions playing video games competitively. In Malaysia, Esports players such as Chai “MuShi” Yee Fung and Zheng “MidOne” Yeik Nai are household names in the industry. Both had garnered millions in income from gaming. MuShi in particular was reported to make more than RM3 million while MidOne racked up about RM2 million from playing Dota 2 professionally. Following their success, both players have largely contributed to the growth of Esports’ fan-base in Malaysia. 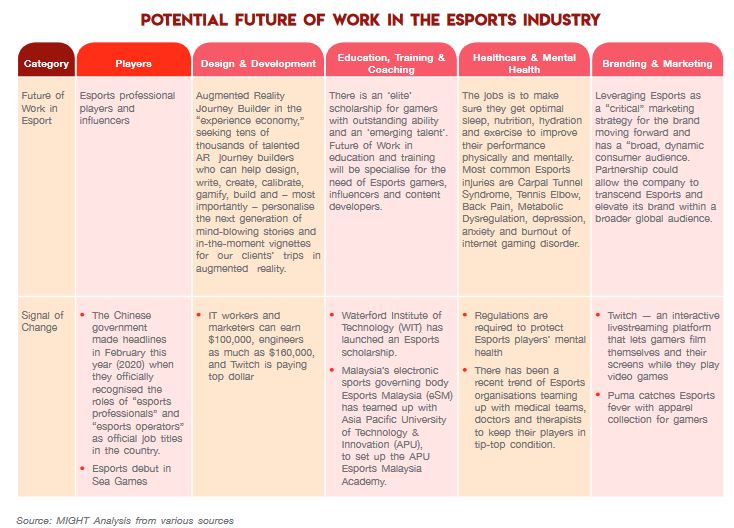 Conclusion
Without doubt, Esports is on course to become a popular digital industry in the near future. With its values steadily increasing, it will soon become one of the most pulsating explosions in the digital economy. Plus, with maturing technologies such as 5G, AR, VR and tokenisation (blockchain) pushing the sports’ envelope, this will further amp up Esports’ growth. At myForesight®, we foresee there’s going to be a massive change towards the development of Esports when the convergence of emerging technologies going mainstream eventually becomes available to the mass public. Inevitably, this will change people’s expectations of what the industry can really become as more youths and businesses get swayed by it. 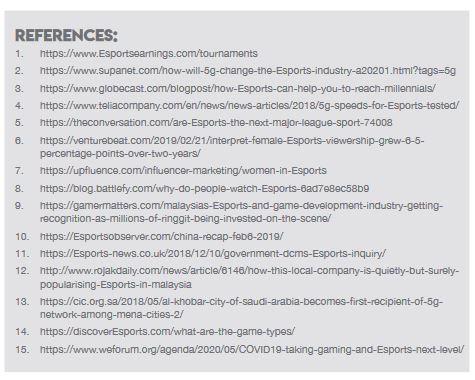