The strategic impact of technology is seen in the rushing change of everyday products. When digital photography became feasible a few years ago, the entire film industry was overturned by simply moving around digital bits instead.

Nikon, Kodak, and other famous names that once dominated photography are still struggling to adjust, laying off thousands of employees and replacing product lines.

In place of film, new industries soon sprung up as digital cameras unleashed floods of photos and videos to populate Web 2.0 – Facebook, YouTube, blogs, wikis, and more sure to come.

This cycle then repeated as smart phones, in turn, replaced digital cameras. Sales of standalone cameras started to decline with the landmark introduction of Apple’s iPhone with built-in digital cameras and video recorders. The Flip camcorder, for instance, was widely popular because it was simple and easy to use. But the market dried up after a flood of smart phones with good digital cameras and video appeared in 2008, and the Flip was soon sold to a gentle death. (1) Kodak invented the digital camera years ago, but had to abandon the market to smart phones. (2) The same disruptive force of technological change is at work as alternative energy replaces oil, genetic medicine extends lives, artificial intelligence automates jobs, robots serve as helpers, and other innovations reach the take-off point.

These simple examples highlight the threats managers face if they fail to adapt to strategic technological change, as well as the opportunities available at the leading edge. And shorter technology life cycles require that they act quickly or lose product lines. The only safe haven is to remain at the forefront of change. This article presents an overview of the Technology Revolution and how corporations can compete in an era of economic transformation.

We draw on a state-of-the-art forecasting system (www.TechCast.org) to outline strategic technological advances that are likely to enter the global mainstream and their expected impacts. Guidelines outline how business and other organizations use technology forecasts to form strategy, and conclude by aggregating our data to provide a “macro-forecast” of the next decade or so. Technology strategy is a powerful tool to help convert creative destruction into successful business ventures during the difficult years ahead.

To better understand the Technology Revolution, the TechCast Project at George Washington University (www.TechCast.org) provides authoritative forecasts across the entire technological spectrum. Technology forecasts are essential because society’s collective technical “tools” comprise the economic foundations of the social order, and so sound forecasts are crucial for anticipating product innovations and social changes. TechCast is a data-based website that pools the knowledge of 100 plus high-tech CEOs, scientists and engineers, academics, consultants, futurists, and other experts worldwide to forecast breakthroughs in all ﬁelds. It is possibly the best forecasting system available, covering the entire range of technological innovation and updated constantly. The Project was cited by the U.S. National Academies of Science and Engineering as one of the three best systems in the world, 3 and web searches rank it No. 2 or 3 out of 52 million hits. No forecast can be really accurate, of course, but validation studies conﬁrm this approach provides estimates accurate enough to put decision-makers in the right ballpark.

The results show that technological advances, their adoption patterns, and social impacts follow well-defined cycles that can be forecast rather accurately. Figure 1 presents highlights of this work for 70 leading technologies organized into seven fields. Some of these technologies are available commercially but they have not yet reached the 30% adoption level where breakthroughs enter mainstream use. Following is a quick summary of how these advances are likely to affect various business sectors. Please note that these highlights are drawn from the website, and so details and references can be found at www.TechCast.org.

The Energy & Environment Crisis is an Opportunity in Disguise

Globalization is expected to almost double the number of people living at industrial levels over the next decade,4 producing commensurate increases in energy demands, pollution levels, global warming, and other aspects of the energy and environment crisis. Our forecasts show that green business is likely to take off in three-five years and governments are likely to take serious steps on global warming about that time. Alternative energy sources – solar cells, wind turbines, biofuels, etc. – are growing 30-40% per year, almost like Moore’s Law. The global market for green technologies is expected to reach about $10 trillion in two-three decades, larger than autos, health care, or defense. In short, the energy and environment mess actually offers a great opportunity in disguise.

Computer power should continue to double every two years; a second generation of optical, biological, and quantum computers is poised to take over; and artificial intelligence is automating routine tasks. The Web is the same age that TV was when it became the dominant force of the 20th century. Over the coming decade, working, shopping, learning, and most other social functions are likely to move online into a virtual world that is ever-present and intelligent. You might buy something by simply talking with a virtual robot that greets you by name, knows all the merchandise and displays it on demand, answers questions, and has infinite patience – the perfect salesperson.

E-Commerce is Exploding around the Globe

Most e-commerce today operates at 10 -15% adoption levels, but online shopping, publishing, education, entertainment, and other services are likely to reach the critical 30% adoption level soon where new markets usually take off. And the huge populations of China, India, Brazil, and other developing countries are moving in droves to PCs, the Internet, and smart phones. We anticipate that five-six billion people will soon create online markets of several trillion dollars. The late C.K. Prahalad, a leading business professor, put it best: “The world’s four billion poor should be considered the biggest source of growth left.”

The factories of the Industrial Age are yielding to intelligent manufacturing systems operating worldwide to produce goods cheaply and quickly. Research in materials and nanotechnology is making it possible to create almost any type of product, and mass customization can deliver sophisticated goods designed for individuals easily. Attracted by cheap labor and new markets, industrialization is likely to raise living standards dramatically in most poor nations over the next few decades – along with mounting demands for energy, ecological damage, and clashes between diverse cultures. An industrialized world will be a boon to business, but making it sustainable is an enormous challenge that will test us severely.

Artificial organs are being developed to replace almost all bodily functions, including parts of the brain, and stem cell research is increasingly able to repair and grow organs. Electronic medical records, online doctor’s visits, computerized diagnostics, and other forms of telemedicine should curtail rising costs and improve quality of care. Nanotech is being used to develop tiny devices that are intelligent enough to seek out cancer cells and destroy them. Just as the Industrial Age mastered most aspects of the physical world, these advances are now making it possible to master the biological world. Yes, it sounds too good to be true, but so did the notion that men could fly, much less to the Moon.

Transportation Is Moving Faster and Farther

Our forecasts show that a new wave of green autos powered by hybrid, electric, and fuel cell engines should become mainstream about 2013 – 2018, and we are likely to see intelligent cars that drive themselves. It may seem that information forms a virtual world that parallels the physical world. People will always want to visit each other, handle the merchandise, and hammer out tough decisions together.

CEO Richard Branson’s Virgin Galactic is likely to launch its first suborbital flight of tourists in a year or two, commercial rockets will soon service the International Space Station, and other competitors are planning visits to the Moon and space hotels. Just a few years ago the idea seemed laughable, but it now looks like space commercialization will soon open the final frontier to private ventures. 7 As access to space becomes widely available, it’s easy to imagine how this watershed from government control to private enterprise could unleash a rush of space pioneering.

Forming a good strategy is inherently an uncertain process and all organizations do it somewhat differently, of course. Box 1 outlines insights from creative companies like NetFlix, Apple, and Toyota stay at the cutting edge of innovation. Our consulting work and sound management practices all lead to the following four general principles to effectively guide technology strategy. For more, see www.BillHalal.com. 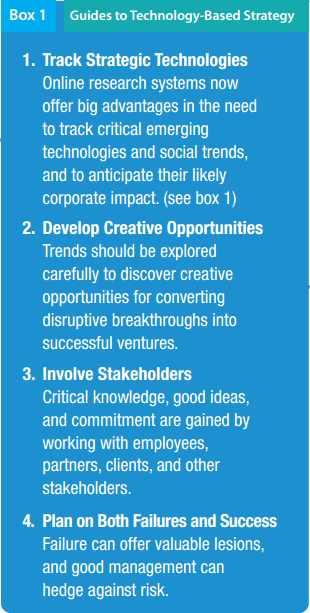 PLANNING FOR THE NEXT ECONOMIC UPCYCLE

Our collective forecasts are aggregated to “macro-forecast” the larger economy over the next decade or two. The bubble chart in Figure 2 presents all three dimensions of all forecast data: Most Likely Year, Experts’ Confidence and the potential Market Size. This analysis suggests that the Great Recession may linger for a few years, but a new wave of economic growth is likely to take off about 2015.

The period around 2015 is significant because the cluster of green technologies, information systems, e –commerce, and advanced auto designs in Figure 3 suggests a resurgence of economic growth is likely about that time. This also coincides with the pattern of 35 year cycles that roughly govern U.S. stock markets. Look at a 100 year graph of the Dow Jones Industrial Average on a log scale and you will find three 35 year cycles. The Roaring Twenties was the peak of a 35 year cycle that ended with the Great Crash of 1929. The Eisenhower boom of the sixties started about 1945 and was followed by the Reagan boom that began with his election in 1980. The 2008 economic crisis marked the end of the Reagan 35 year cycle, and it is likely be followed by a new worldwide boom starting about 2015 based on the technologies noted above.

As the Technology Revolution picks up speed about 2020, we are likely to see personal medicine, intelligent cars, alternative energy, and the other advanced technologies shown. This period is also likely to enjoy near-infinite computing power with 2nd-generation architectures (optical, bio, nano, quantum). Smart robots are likely to enter homes and offices, and good AI is likely to automate routine tasks, in the same way GPS navigation solved the problem of travelling from point A to point B.

With such bold prospects for innovation likely over the next five to ten years, it is essential to prepare for the Technology Revolution. Whatever the method and whatever the purpose, organizations need to develop some type of well-thought system to forecast and adapt to this wave of technological change. There may be uncertainty about specific breakthroughs, but there is very little uncertainty that we are going to see plenty of technological change over the planning horizon. 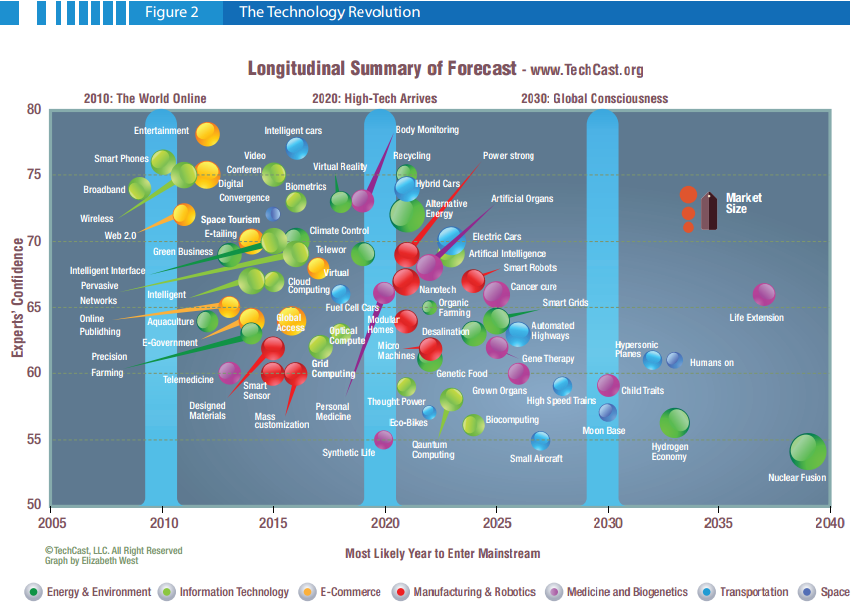 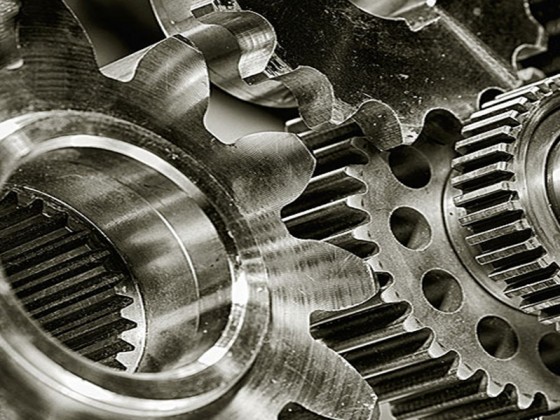 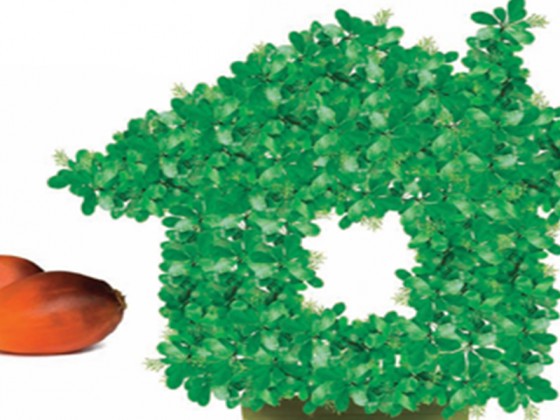