Innovation is rapidly changing and becoming more efficient and interconnected as the world is starting to see a merging of digital, physical and biological realms, which we call the Fourth Industrial Revolution. The new technologies, that comes alongside every industrial revolutions, enables societal shifts by influencing economics, values, identities and possibilities for future generations. Our environment is constantly changing. The world is largely shaped by industrialists and transformed by technologists.

However, Industrial development has led to many of the world’s current environmental problems—e.g. climate change, unsafe levels of air pollution, depletion of fishing stocks, toxins in rivers and soils, overflowing levels of waste on land and in the ocean, loss of biodiversity and deforestation. While industries have a unique opportunity to take advantage of the Fourth Industrial Revolution, they must be aware of the damaging consequences to the environment.

Carbon emissions such as nitrogen oxides (NOx), along with particulate matter (PM) and sulphur emissions (SOx), create greenhouse gases that can cause damages to the environment and pose a danger to human health. Although there are many industries that are guilty of contributing excessive carbon emissions, the shipping industry particularly stands out from the rest.

Exhaust gas, produced by diesel powered maritime vessels, has been identified as one of the major contributors to the increased level of SOx emissions in the atmosphere, especially in countries with high activity of maritime trade. As the maritime sector grows, the amount of air pollution from ships increases exponentially as well, intensifying the chemical reactions in the air in which SOx and NOx are converted into fine particles, sulphate and nitrate aerosols. In addition to the particles directly emitted by ships such as black carbon, these secondary particles increase the negative impacts of shipping pollution.

All this can be summed up in one sobering statistic—it is estimated that the daily emissions of cruise ships are equal to emissions of one million cars, due to the fact that ships are the largest machines on the planet and that the world’s largest diesel engines can be found on cargo ships. This raises concerns related to how shipping activities are having a significant impact on the environment as a whole.

The heat-trapping nature of greenhouse gases was demonstrated in the mid-19th century. There is no question that increased levels of greenhouse gases cause the Earth to warm in response. As a result, climate change is happening and affecting the whole wide world. Today’s greenhouse gas level is at a 3 million-year peak.

Shipping emissions are predicted to increase between 50 percent and 250 percent by 2050— depending on future economic and energy developments. This is not compatible with the internationally agreed goal of keeping global temperature increase to below 2°C compared to pre-industrial levels, which requires worldwide emissions to be at least halved from 1990 levels by 2050.

The marine ecosystems worldwide are suffering a massive decline in biodiversity and irreparable alterations to ecosystem functions. The capacity of oceans to recover from global perturbations and thus to maintain ecosystem goods and services is rapidly weakening. Climate change, pollution and ships-associated impacts have been identified as the principal causes of marine biodiversity loss and thus requires intervention.

Water Security
Demand of fresh water needed to support the global economy is expected to exceed supply by 40 percent by 2030—pollution and climate change affect the global water cycle and threatens the wellbeing and livelihoods of millions of people.

The World Health Organization (WHO) has reported that around 7 million people die annually from exposure to air pollution—one death out of every eight globally. A new air quality model, also produced by WHO, confirms that 92 percent of the world’s population lives in places where air quality levels exceed the safety health limits.

These challenges pose an urgent global threat as the world’s current population of around 7 billion is expected to grow to 9.8 billion by 2050. Through this increasing population, the demand for food, materials, transport and energy will further increase the risk of environmental degradation and affecting human health, livelihoods and security.

Due to all this environmental degradation, caused in part by the shipping industry, the International Maritime Organisation (IMO)—a specialised agency of the United Nations responsible for global standard-setting for safety, security and environmental performance of international shipping—has regulated a new set of rules pertaining to sulphur emission for ships in 2005. This stricter rule comes into effect under the International Convention for the Prevention of Pollution from ships (MARPOL) Annex VI, specifically under regulation 14, which covers emissions of sulphur oxides and particulate matter from ships.

This rule was to be the vehicle through which reducing maximum limits on SOx emissions was to be phased in between 2005 and 2020. Under the regulations, there is a set limit to the amount of sulphur emission from vessels from its uncapped levels to 4.5 percent of fuel content. This decision is expected to reduce the world’s air pollution and will save millions of lives in the coming decades. This level was reduced in 2012 to 3.5 percent.

In 2016 a new regulation update was announced by IMO stating that under a new global cap, ships will have to cut sulphur limits in marine fuel from 3.5 percent to 0.5 percent and that the effective date for reduction will be in 2020. 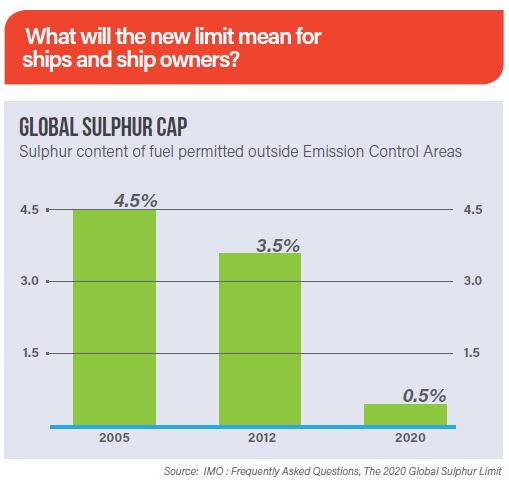 Based on the limit regulation, ships will have to use fuel oil on board with sulphur content of no more than 0.5 percent m/m compared to the current limit of 3.5 percent. The interpretation of ‘fuel oil used on board’ includes use in main and auxiliary engine and boilers.

This stricter rule comes onto effect under the International Convention for the Prevention of Pollution from ships (MARPOL) specifically under regulation 14, which cover emissions of sulphur oxides and particulate matter from ships.

To meet this new emission regulation, there are some alternatives that shippers could comply with such as fuel alternatives, which includes Liquified Natural Gas (LNG), Marine Gas Oil or Marine Diesel Oil (MGO), Scrubbers, Waste Heat Recovery, Batteries and Fuel Cells.

Exemptions of the regulation are provided for situations involving the safety of the ship, saving life at sea, or if a ship or its equipment is damaged.

Another exemption is provided for allowing ships to conduct trials for ship emission reduction development as well as control technologies and engine design programmes. This would require a special permit from the Administration(s) (flag State(s)).

What does it mean for Malaysia shippers?

Following the new set of regulations by IMO, Malaysia has ratified the MARPOL Annex VI and is also aiming for cleaner shipping fuel by 2020. The reduction is aimed to reduce major health issues and brings environmental benefits globally, particularly for populations living close to ports and coasts. Malaysia is committed and currently exploring new green alternatives to fuel the growing demand of the shipping industry. This is to ensure that the Straits of Malacca remain open, safe and secure for shipping.

To meet this new emission regulation, the shipping industry has a wide range of options and techniques to cut pollution, most of which are already available on a larger scale and easily implementable.

Low-sulphur fuel is created by an extended refining process, during which a greater percentage of the sulphur content is removed. When used as fuel in ships, it will automatically produce exhaust gases containing considerably less SOx. It also reduces other pollutant emissions, such as black carbon which is a potent global-warming agent.

Some ships limit the air pollutants by installing exhaust gas cleaning systems, also known as ‘scrubbers’. This is accepted as an alternative means to meet the sulphur limit requirement and helps to remove most of the sulphur oxide from the smoke stack exhaust. Scrubbers can lower the emissions of Sulphur Oxide (SOx) by 99 percent and considerably reduce emissions of other polluting particles. There are, however, concerns regarding wash-water discharges from openloop scrubbers which deposit them in open seas and closedwater areas. This leads to higher pH levels in surrounding waters causing additional environmental concerns. Hence, open-loop scrubbers are not a sustainable alternative compliance method for marine sulphur standards.

SCR is a system to treat exhaust gases before they are emitted into the atmosphere. SCR is very effective in reducing emissions and has already been used by many ships worldwide and works better with low-sulphur fuels.

Experiments with wind and solar power, biofuels and fuel cells are ongoing and could be useful in the future. Although these alternative energy sources are not ready for mass industrial use, these experiments are yielding better results than past efforts due to current technological advancements. Therefore, it is vital that these experiments are sustained to break through the barrier for mass industrial consumption.

Now is the time that decisions need to be made concerning how to comply with the 2020 Annex VI requirements. The future is green shipping for efficient marine transport with minimal health and ecological damage. Cleaner practices especially on ship scrapping, emission control and port management are needed and require a collective effort from the industry and its engineers together with regulators, port authorities and communities. Environmental impacts should be considered as the utmost priority in determining optimal routes and modes for delivery of goods. 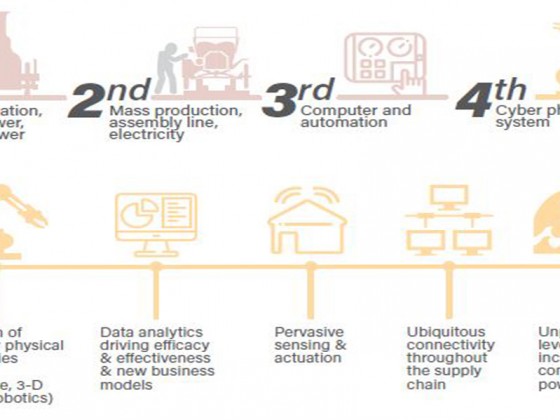