An adolescent is an individual who is undergoing a period of transition from childhood to adulthood, where the individual is prepared to face future challenges in life. During this specific period, the adolescent experiences biological, cognitive, social and economic transitions. Adolescents can possibly get involved in risk-taking situations, conflicts and troubles which can lead to behavioural problems. It is found that behavioural problems among adolescents are highly associated with improper or inadequate prevention and intervention of caretakers. These problematic behaviours may eventually escalate and manifest in adulthood.

Youth Self-Report (YSR) was developed and established by ASEBA to measure the emotional and behavioural problems of adolescents. YSR is an instrument that consists of 112 items to be completed by the adolescents themselves. The respondents are instructed to evaluate themselves on how true each = item describes themselves now or within the past 6 months. This instrument can be used to assess internalising (anxiety, depression, over-controlled) and externalising (aggressiveness, hyperactivity, noncompliant, under- controlled) behaviours. It contains eight subscale symptoms which are withdrawn, somatic complaints, anxiety and depression, social problems, thought problems, attention problems, aggressive and delinquent behaviours. The summation of subscale anxious/depressed and withdrawn/depressed scores is equivalent to the scores for internalising behaviours. On the other hand, the summation of rule-breaking and aggressive behaviour scores are the scores of externalising behaviours. Total problem scores are the sum of all eight symptoms’ scores. Higher scores indicate greater problematic behaviours whereas lower scores indicate otherwise. The reliability of the instrument is .92. Prior to the study, a pilot study was conducted with a sample size of 15 adolescents from two children institutions in Pulau Pinang. The Cronbach Alpha test has shown that the reliability of the measurement is .94, which exceeds the value recommended by Nunnally (1978). 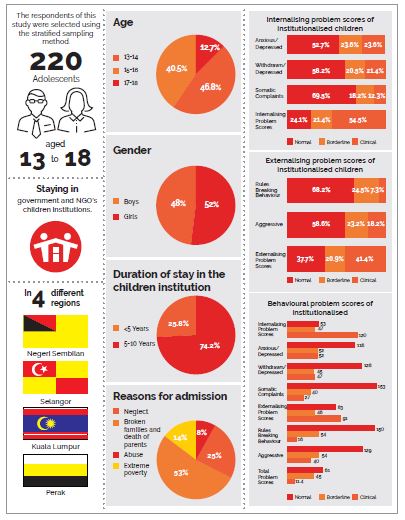 For externalising problem scores, the results indicate that 62.3% of the respondents were abnormal in externalising problems and have the obvious symptoms of such behavioural problems. An individual with the symptom of externalising behaviours may manifest aggression, violence, harassment, disruptiveness and defiance. Therefore, it can increase the likelihood of getting involved in adult crimes and violence. The consequences the child may face is ending up dead, in jail, or engaging in substance abuse resulting in making it nowhere in life. However, for the sub-symptom of rulebreaking behaviours and aggression, 68.2% and 58.6% of the respondents have obtained normal level score. Only a minority of adolescents (7.3%) exhibit the symptom of rule-breaking behaviours. This somehow indicates that the adolescents in children’s institutions are obedient to the rules. The overall results show that more than half of the respondents have obtained a clinical level for total problem scores. A large number of adolescents have indicated that the environment, conditions and services provided by the children’s institutions are inadequate to instil good behaviours in the children who reside there. It is reported that children who reside in children’s institutions have significantly higher behavioural problems than children who are living with their parents in Kuala Lumpur. Thus, more efforts should be invested on children’s institutions in order to improve the overall condition to instil positive development of the children.

This study thus proves to relevant agencies, especially the Department of Social Welfare and schools, that they should pay extra attention to the behaviours and emotional development of institutionalised adolescents. To prevent internalising and externalising problems among institutionalised adolescents, more attention should be focused on adolescents identified with such behavioural problems so that professional counselling services in both schools and institutions can be provided. Besides that, relevant agencies should promote activities that can enable adolescents to participate in positive youth development programs and engage themselves with the environment so as to minimise the onset of depression, feeling withdrawn and somatic problems. This will benefit youths residing in children’s institutions and thus prepare them to be responsible citizens in the future.