Robotics has come a long way since the dawn of IRB-6 by ASEA (now known as ABB) in 1975. Being the world’s first fully electrically-driven and microprocessor-controlled robot, the IRB-6 was the epitome of the robotic world then, and has since paved the way for a new industry of industrial robots to emerge. Four decades on since IRB-6, what has changed?

Robotics has come a long way since the dawn of IRB-6 by ASEA (now known as ABB) in 1975. Being the  world’s  first  fully  electrically-driven  and  microprocessor-controlled  robot,  the IRB-6  was  the  epitome of the robotic world then, and has since paved the way for a new industry of industrial robots to emerge. four decades on since IRB-6, what has changed?

Just about a decade ago, industrial robots were not much different from IRB-6 except for increased payload performance, higher accuracy, more computing power, and greater dexterity. They still possess limited intelligence, are insensitive to the environment that they operate in, are very expensive, and they require specialists to programme, operate, and maintain them.

Until recently, industrial robots were confined  within  cages  to  ensure  the safety of human operators who also share the same workspace as them. Safety was, and still is, a major cause of concern mainly because of the immense force that industrial robots can exert, and their limited ability to sense and be aware of the environment in which they operate in.

As industrial robots evolve, there is a growing need for human operators to work freely and in close collaboration with them in order to increase production  efficiencies  and  to  expand the robots’ role in the manufacturing process. In such a collaborative mode, the ability for robots to sense human activities within its operating environment in real-time and to react accordingly, becomes a crucial safety requirement.

With the advent of new technologies such  as  vision  systems,  artificial intelligence and advance sensors, industrial robots can now be configured  to  work  collaboratively with their human counterparts in the same working environment without the need for a protective barrier. However, the way industrial robots are being applied in a collaborative mode needs to be governed by international safety standards such as the ISO/TS 15066 which dictates strict rules and guidelines for the use of sensing technologies and the way industrial  robots  are configured.

To further improve the safety of industrial robots, they are now being equipped with force torque sensors that detect impacts or abnormal forces. These force torque sensors will automatically stop the movement of the robotic arm upon detecting a possible accident with human operators. The force limiting device will ensure that only a minimal amount of force is being exerted onto the person. So, even if an accident is unavoidable, it won’t cause serious injuries. Such robots are termed ‘force limited robots’. Coupled with other environmental sensing and safety technologies, a new generation of collaborative robot has been born, and is generally referred to as ‘cobot’. 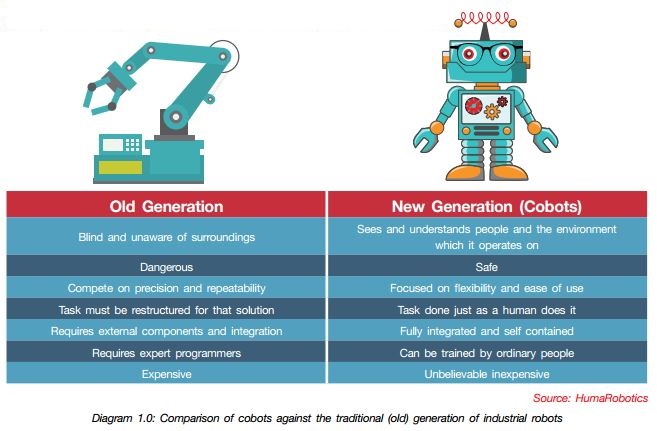 “The ability for robots to sense human activities within its operating environment in real-time and react accordingly becomes a crucial safety requirement.”

In contrast to the run-of-the-mill industrial robots, cobots are much smaller, lighter, more agile (degree of freedom), safer, easier to operate (programme),  and  cost  significantly less. That said, cobots’ payload capacity is relatively lower (around 3kg), hence they are more suitable for lighter tasks. The fact that cobots  are  specifically  designed  to operate in close collaboration with humans within a human-centric environment, the potential for their applications beyond the traditional industrial (or manufacturing) environment is tremendous.

Most importantly, the cost of adopting robotic solutions to a given problem has since been reduced significantly  with  the  introduction of cobots. A typical cobot system now costs around €30K, which is relative affordable to most small and medium-sized enterprises (SMEs). With the lower initial investment and a shorter payback period, the adoption rate is set to accelerate as cobots move beyond the current stage of ‘early adopters’ and into the next stage of ‘early majorities’ in their technology adoption lifecycle.

Within the manufacturing environment, cobots complement the existing applications of industrial robots  by  fulfilling  processes  that are traditionally manned by human operators. Diagram 2.0 illustrates this new role of robots in the manufacturing process. 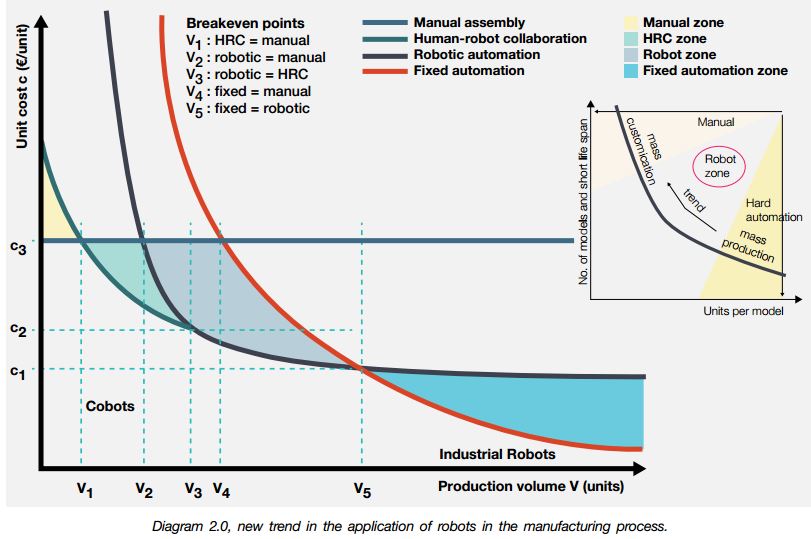 The trend of industrial robots is  to  fulfil  the  automation  gap between mass production and mass customization. Mass work for products with high-volume and low unit costs such as newspaper printing and the bottling of soft-drinks will continue to be manufactured by hard automation machineries. Towards the other end of the spectrum is mass customization where every product being produced is unique to the requirement of individual customers. Mass customization processes are traditionally operated by human operators as they have the dexterity and intelligence to perform the required tasks. The production volume of mass customization processes are generally low and the per-unit-cost is usually high.

Industrial robots have traditionally been applied to operate near the mass production spectrum where the focus is to leverage on the repetitive nature of robots to mass produce complex parts and assemblies at relatively low cost. Until the arrival of cobots, the production of highlymixed and highly-complex parts and assemblies  were  mostly  fulfilled  by human operators. With its agility, fast change-over, easy-programmability, and collaborative nature; cobots have given industrial robot manufacturers the opportunity to expand the role of robots towards the production of highly complex and customized products alongside human operators in the HRC-Zone (see Diagram 2.0).

“With the advent of new technologies such as  vision  systems,  artificial  intelligence and advance sensors, industrial robots can now  be  configured  to  work  collaboratively with their human counterparts in the same working environment, and without the need for a protective barrier.”

By applying robotic automation towards the mass customization spectrum, manufacturers’ reliance on manual labour can be reduced whilst quality is maintained and productivity improves. Future manufacturing facilities will see cobots scattered around production lines, working hand-in-hand with human operators, while heavier industrial robots will continue to perform what they do best – repetitive, dangerous, and heavy lifting tasks.

Beyond the factories, robotic technologies  are  now  flourishing in a wide variety of form-factors and across different fields of applications. Besides industrial robots, service robots are set to grow significantly in the near future, especially in key markets like Japan. A service robot is a new form of robot that performs useful tasks for humans (or equipment),as defined by the International Federation of Robotics (IFR).They normally operate in an unconfined and often human-centric environment,to provide services for either personal or professional applications. Examples are domestic servant robot, automated wheelchair,and rehabilitation robots.

Having evolved from the time-tested and trustworthy industrial robots, many technologies associated with cobots can be extremely applicable in service robots. Cobot’s high agility, contact sensitive, and force limiting features will be the prerequisites for service robots to operate in a human-centric environment. Where safety is paramount, vision system deployed in cobots for environmental sensing and collision avoidance can be applied to prevent unintended accidents and injuries.

The evolution of industrial robots into their current form is not by accident, but by the necessity of improving safety and increasing productivity. Touted as the next generation of industrial robots, cobots are set to push the technological envelope in robotics, and expend robotics into non-traditional applications such as professional services and consumer electronics. Although the application of cobot as a robotic product may be limited to the manufacturing shop-floor,  its  technologies are applicable across different types of robots and applications. Irrespective of how industrial robots will evolve, cobots and their associated technologies are likely to play a catalytic role today in expanding robotic technologies beyond the manufacturing plants, and into our everyday lives. 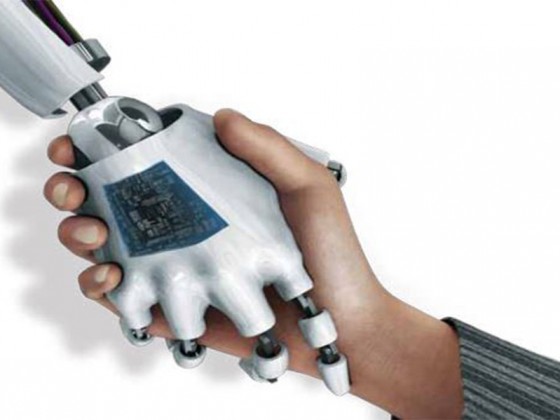 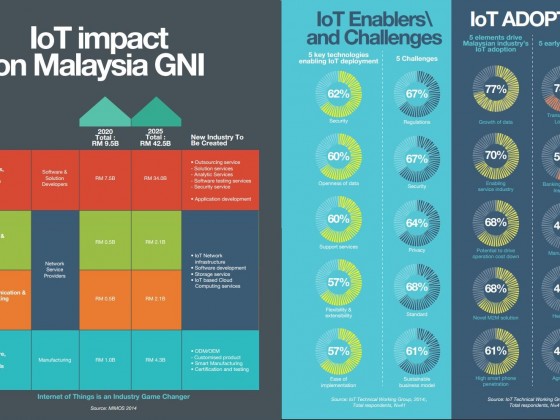