Blockchain is a technological advance with wide-reaching implications that will not only transform the financial services but various other businesses and industries.

New Applications for Business and Government

Blockchain is a technological advance with wide-reaching implications that will not only transform the financial services but various other businesses and industries. It has been said that blockchain will do for transactions what the Internet did for information—profoundly changing how the world works.

Although blockchain technology is complex, the idea is actually simple. At its most basic, blockchain is a vast, globally distributed ledger or database running on millions of devices open to anyone—not limited to just the sharing of information but including anything of value such as money, titles, deeds, music, art, scientific discoveries, intellectual property and even votes—that can be moved and stored securely and privately.

On the blockchain, trust is established through mass collaboration and clever codes ensuring integrity and trust between strangers. Simply put, blockchain has made it difficult to cheat.

As it is with all new technologies, the public in general may be ill informed regarding what blockchain really does. Indeed, among the main roadblocks to greater proliferation and acceptance of blockchain implementation is the steep learning curve associated with its capabilities and function. Due to this, popular depictions of such technologies have in many cases been less than favourable. Often limited to depictions of transactions between shady Internet accounts for illicit purposes, the true benefits of blockchains for legal everyday use are often glossed over resulting in misplaced fears that inhibit potential users from embracing the technology.

The complexity of blockchain needs to be simplified and generalised for understanding in order for the technology to be widely accepted. It would be easier for the masses to accept the use of blockchain once they have grasped and understood the concept. Trust in the system is crucial, especially when it involves removing intermediaries like banks and financial institutions.

Among the attempt in handling this with a friendly face on blockchains. This would allay fears and let people see the benefits it brings to their day-to-day activities.

For example, CryptoKitties—an app that uses cats to make the blockchain technology more appealing and accessible—is one of the world’s first blockchain games. Although labelled as a cryptocollectable and not cryptocurrency, similar to Bitcoins, users can buy and sell digital cartoon cats as well as breed them to multiply the numbers of cats that they own on the CryptoKitties app. 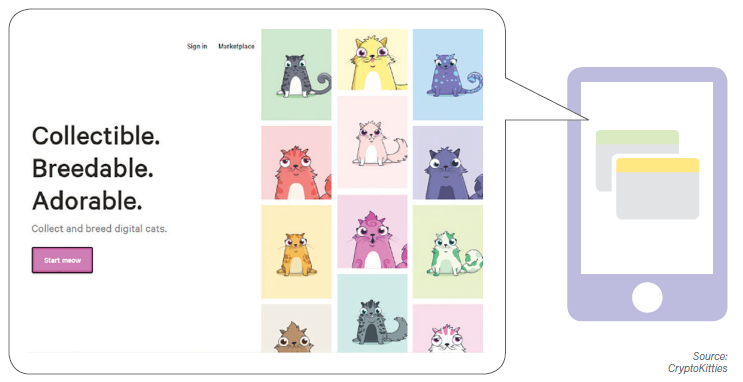 Another example of a bitcoin-madesimple application is the wallet. It is similar to a normal wallet where we store our coins and documents, only this one stores bitcoins. There are many versions of the bitcoin wallet, the most famous ones being Blockchain Wallet and FreeWallet.

A smart contract is another example of how blockchain can be a preferred method of choice. Different from a traditional contract, a smart contract effectively eliminates the need for middlemen in most transactions by creating a logic-based structure that governs the agreement. Since the contracts are hosted on the blockchain, it is immutable—meaning either party will be unable to make any alterations without alerting the network. Smart contracts can be used to facilitate property transfer, record land titles, automate claims processing, issue payments, foster new approaches to financial engineering and much more.

Ethereum emerged as the first blockchain platform that allowed developers to easily create smart contracts. While smart contracts work much like a standard blockchain transaction, it is possible to insert a conditional statement that must be met before a function is executed. 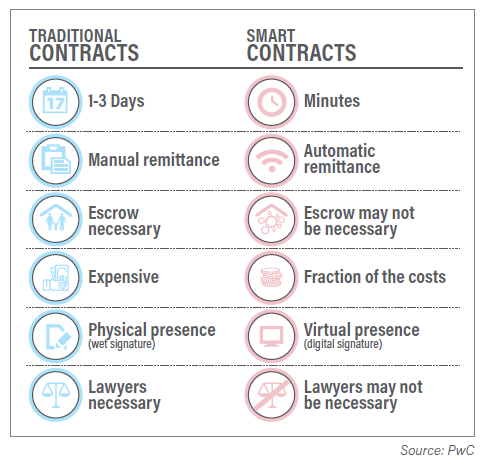 WHY BLOCKCHAIN IS SECURE

Transactions, especially financial ones, require an army of trusted middleman to ensure information integrity. In a traditional setting, these middlemen are normally centralised and by default becomes high potential targets for attacks. Blockchain reduces this expense significantly while providing a higher degree of security than current practices.

Applications developed for blockchains are categorised as decentralised applications, or ‘dapp’ for short. Where internet users today connect through centralised servers, dapps use the blockchains’ peer-to-peer network of distributed computers to connect users. Each computer does a little bit of work and no one can fully access the data being transmitted because it is distributed among the network.

Due to this inherent feature, dapps proved to be more difficult for attackers to exploit as outages of individual nodes are far less damaging than a successful attack on a singular primary server. Furthermore, dapps usage of the blockchain allows for verifiable record duplication on a massive scale to prevent data loss.

Another security feature of blockchain is that any changes made to the database are immediately sent to all users to create a secure, established record. With copies of the data in all users’ hands, the overall database remains safe even if some users are hacked. With the level of security built into blockchain, transactions that occur can never be undone or tampered.

This tamper-proof, decentralised feature has made blockchain increasingly popular beyond its original function of supporting bitcoin digital transactions. Many cutting-edge finance firms, for instance, have used blockchain to expedite processes and cut costs without compromising security.

A TECHNOLOGY FOR A DIGITAL GOVERNMENT

Blockchain offers many advantages but the top features that have caught the attention of the governments’ interest are—decentralisation, transparency and immutability. These three components make Blockchain a promising technology that brings solutions to current pressing issues like corruption, bureaucracy and lack of accountability. Many governments around the world are experimenting with Blockchain to further improve their service delivery.

♦♦Sweden is testing the use of blockchain for their land registry.

♦♦The UK is using blockchain to monitor distribution of welfare and benefits.

♦♦In the US, the National Science Foundation is funding research to establish whether blockchain technology can improve the resilience of digital infrastructure.

♦♦Within the Middle East, Dubai Land Department (DLD) has become the world’s first government entity to use Blockchain technology. DLD has created its Blockchain using a smart and secure database that records all real estate contracts, including lease registrations and links them with the Dubai Electricity & Water Authority., the telecommunications system and various property related bills.

♦♦Locally, The Malaysian Industry-Government Group for High Technology (MIGHT) has said that Malaysia would be adopting Blockchain by 2025. Additionally, Malaysian banks are already taking proactive steps to encourage its development in the country. CIMB and Maybank are two of Malaysian banking groups that are working with local FinTech companies to explore possible use of blockchain.

Change affects us all and we each deal with change differently. The same is applicable with all new technologies including blockchain. There are many ways to implement technology; always the risk is there that for all the dollars we spent on the research and development of technology, there often remains a persistent and troubling gap between the inherent value of the technology developed and our ability to put it to work effectively. What this means is that sometimes we think of the advantages of blockchain use without considering how its implementation can bring unintended consequences as well.

The best example of this is in the the cryptocurrency markets, where it is currently not regulated nor backed by any central bank. As the cryptocurrency market remains highly volatile, the value of an individual currency can fluctuate wildly based on many factors including adoption rates, the value of fiat currencies, government regulations and cybersecurity concerns. Based on this rationale, it would be best for investors and early adopters to focus on other market segments as well when implementing blockchain, rather than focusing on cryptocurrency.

There is also fear that cryptocurrency can be used to assist unlawful activities, although to date there is no conclusive proof that money laundering and terrorism financing goes through the trading of cryptocurrencies. As a prevention, beginning 2018 Bank Negara Malaysia will designate persons converting cryptocurrencies into fiat money currencies as reporting institutions under the Anti-Money Laundering, Anti Terrorism Financing and Proceeds of Unlawful Activities Act (Amla) 2001 to ensure the stability and integrity of Malaysia’s financial system.

The enactment of the said regulation by Bank Negara raises another challenge for blockchain—the possibility of excessive government regulations. As government agencies are getting more involved in regulating blockchain technology, there will be more rules and regulations set up. Depending on how numerous or invasive the regulations would be, their seemingly noble intentions to protect the larger society could hamper development and innovation.

Transparency is often praised as the hallmark of blockchain technologies. However, the possibility of personal financial records being out in the public may concern potential users and industries that, either by law or preference, hold privacy in high regard. Private blockchain branches may be preferable in those industries (such as healthcare), to help alleviate privacy concerns. Besides, blockchains and their related emerging technologies are not infallible although they offer a high degree of security.

In July of 2017, Parity Technologies’ digital wallet was breached resulting in the theft of $30 million in ether. There is an ongoing arms race in the cybersecurity industry as legitimate developers continuously improve upon security measures while increasingly sophisticated criminals seek for vulnerabilities. The blockchain security landscape is no different and the steady innovation of new ways to secure funds will be needed before such technologies will be fully accepted.

In conclusion, the blockchain technology is revolutionising business and the way people work. It is part of a huge wave of transformational technology change that is already affecting the banking, financial services and payments industries. To move forward, we need to be aware of smart contracts, distributed ledger technology (DLT) and the underpinning technology such as decentralised apps.

With the emerging of blockchain applications, the supply chain industry is predicted to reap great benefits. Oil & gas, food, pharma, and other industries are testing methods of recording and tracking items and transactions with a distributed ledger. Some of the potential benefits will include greater process efficiency (less paperwork), clearer visibility for compliance, reducing fraud (from counterfeiting) and errors (from inaccurately labelled products).

Meanwhile, legal departments are now able to explore the potential role of smart contracts for their organisations and between parties by combining smart contracts with machine learning programmes to accurately predict which users are more likely to uphold their end of a contract. Computer learning can help businesses and lenders avoid making agreements on accounts which have a higher risk of failing by accessing blockchain ledgers and identifying behavioural, financial, and contextual patterns among accounts that have repeatedly failed to uphold their end of smart contracts to form a rating similar to a traditional credit score. Using this information, individuals can either adjust the terms of their contracts to account for increased risks or offer better terms to favourable clients.

Additionally, decentralised apps and smart contracts could be instrumental for autonomous maintenance. For example, a piece of heavy machinery triggers a request for service, negotiates with a list of pre-approved mechanics for the best price, and sends payment after proof of completed service is provided. A Decentralized Autonomous Organization (DAO) could own and manage equipments, vehicles, and other items requiring such autonomous maintenance. 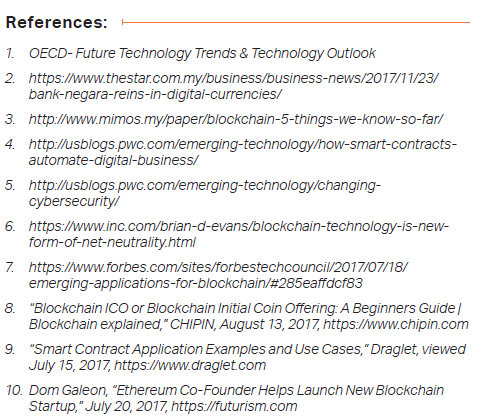 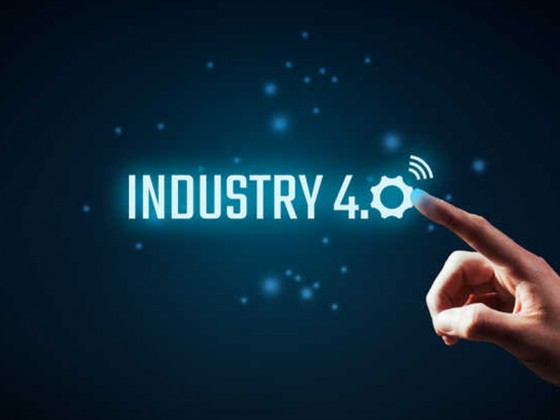 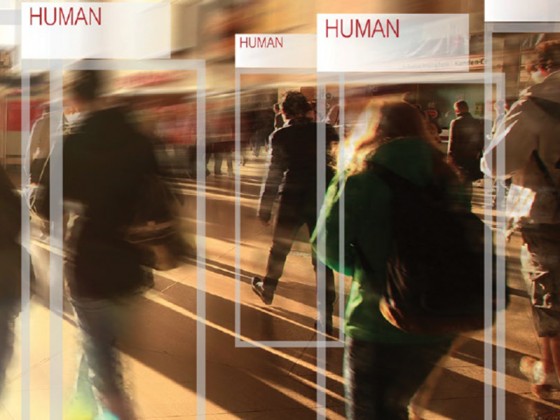