The Rise of Independent Workers

Whether freely choosing to work independently or forced to do so by economic circumstances, the number of freelancers in the workforce is steadily rising. A McKinsey study conducted in 2016 found that between 20 percent and 30 percent of the labour force in both the US and the EU-15 (the first fifteen members of the European Union) is comprised of  independent workers (self-employed or temporary). According to the study, the governments on both continents have seriously undercounted this population, in particular by ignoring those who do independent work to supplement their income. In Europe, freelance workers consist of a sizeable share of the workforce. 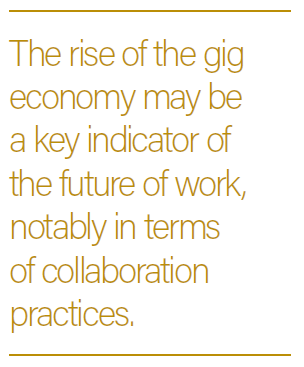 Known as the gig economy, this category of the workforce  comprises those performing contract work, freelance work, and work sourced from online marketplaces. It is now rapidly growing globally and will likely continue to do so throughout the next decade. The rise of the gig economy may be a key indicator of the future of work, notably in terms of collaboration practices. It represents a major change in the nature of work and in the ways of both working and hiring—a shift from working for a single employer to working for clients, and from hiring full-time employees to contracting skilled workers on a project-to-project basis. Although freelancers essentially work for themselves, they offer their skills, know-how, and expert services to a range of different organisations.

Malaysia sees the country’s gig economy as an opportunity to increase productivity by hiring unemployed citizens to work at flexible part-time jobs. The Malaysia Digital Economy  Corporation (MDeC) has set up several initiatives to get underemployed Malaysians onto gig economy platforms namely eRezeki and eUsahawan. Malaysia’s neighbouring countries, Singapore and Taiwan, are seeing huge changes in their gig economies as well. In Singapore, a  new labour association was founded in May 2017 to protect drivers under the ride-sharing apps, and the Singapore Workforce Development Agency has launched initiatives to help freelancers  look for jobs and keep their skills relevant.

The explosion of the gig economy is being driven by a variety of interconnected forces.

Under increasing pressure to reduce overhead especially labour costs, many companies have downsized in recent years. As a result, especially during high-demand periods, organisations sometimes find critical gaps in their work pool. To minimise these gaps, many are turning to independent workers. Freelancers offer companies greater resource flexibility, and therefore greater competitive advantage—allowing them to deploy expert skills as needed, at a considerably lower cost than full-time hires. For many companies trying to control costs, it makes economic sense to power up and power down staffing based on projects. In this manner, companies can meet the needs of individual projects more efficiently, rather than engaging long-term (and then either underutilising or laying off) full-time employees.

One of the primary draws of freelance work involves scheduling flexibility—being able to work  when one wants in whatever ways possible. The ability of freelancers to manage their own time can contribute significantly to their overall well-being. Indeed, 78 percent of adults in the UK believe that freelancing and flexible working can help promote a good work/life balance and  early as many (72 percent) believe it has a positive effect on family life.

For successful freelancers, working independently gives them more control which allows them to be more agile in a rapidly changing world. And a 2016 ReportLinker survey found that 28 percent of freelancers cite the freedom of being your own boss as the top reason to freelance. 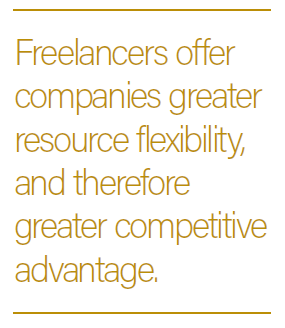 ♦♦ Ability to work at home and from almost anywhere.

Nearly half of freelancers work from home, making the need to commute to workplace  nonexistent and allowing flexibility of scheduling. In addition, surveys of those who use co-working spaces have found that 54 percent describe themselves as freelancers. The Internet has  in large part-erased the effects of distance and the need for in-office collaboration. Modern technology such as smartphones, tablets, and laptops is making it possible for freelancers to work anywhere. Ample software exists to enable teams working from different geography to work together towards same goals.

A 2014 report by MBO Partners on independent workers found that 82 percent reported satisfaction with their work situation, while 76 percent planned to stay independent in the future. In addition, 59 percent strongly agreed that they found real purpose in their job (compared to just 40 percent of non-independent workers).

Even those who do not freelance fulltime overwhelmingly see the appeal of earning more  through side gigs. In 2016, 80 percent of non-freelancers in the US said they would be willing to have a part-time job or work other than their primary job in order to obtain higher income. In addition, those in unstable employment situations are particularly open to the possible economic benefits of freelance work. The ReportLinker survey found that 59 percent of part-time workers and 39 percent of job seekers would consider freelance work.

While freelance work was once looked upon as a euphemism for unemployment, acceptance of freelancing as a valid career path is growing. An overwhelming 87 percent of UK university students see freelance work as a highly attractive and lucrative career option and 29 percent of graduates include freelancing as part of their career strategy over the next five years. The appealing elements offered by the gig economy such as freedom, flexibility, and independence are drawing the job seekers to voluntarily become independent workers and many  workers in traditional jobs (or unemployed) also wish they could do more flexible, self-governed work.

The Downside of Freelancing

Although the overwhelming majority of those who have chosen freelance work are content with
their choice, freelancers also face unique challenges, difficulties and hardships. While workers who choose to go independent and find freelance gigs contribute significantly more autonomy over their work lives, many do so at the cost of employment security. For freelancers, work beyond this gig is seldom guaranteed—although a 2014 survey found that many freelancers report having multiple work streams at the same time, diversifying their income sources, thereby achieving greater economic stability. With no steady guaranteed income, most freelancers need to possess entrepreneurial skills in order to do their work—marketing themselves, finding gigs, negotiating contracts, invoicing and securing payments.

Keep in mind that the picture is not all always rosy. Some independent workers happily choose to work freelance, while others are forced to endure contract work due to unemployment or financial necessity. This would influence their feelings about their position in the gig economy. It also reflects the different skill levels and socioeconomic realities that differ between the gig
economy participants.

In Malaysia, the gig economy is rising at a faster pace than the traditional job market which means individuals who seize work opportunities in that category are often left out from social security coverage due to absence of regulation. The growth of the gig economy has increased by 31 percent this year, surpassing the traditional jobs’ workforce. The Employees’ Provident Fund (EPF) has called on the government to increase its contribution to the 1Malaysia Retirement Savings Scheme (SSP1M) as a means of bolstering the participation of Malaysians who are engaged in the gig economy.

The rapidly expanding freelance economy will continue to drive change in both the way work is
done and in the way companies and workers interact. Over the next decade or more, companies  will likely contract with more freelancers as a means of efficiently handling fluctuations in their staffing needs, creating more and more opportunities for skilled freelance workers.

However, the unique needs of freelance workers still need to be addressed. The more the gig economy workforce grows, the more support services such as tax withholding, health  insurance and retirement savings will become pertinent. These unmet needs may create opportunities for both startups and established players.

Insurers might pool freelance workers, for example, to provide a wide variety of insurance  protection. Investment counsellors and other financial professionals will be needed to set up retirement and pension plans that serve the distinctive work situation of freelance workers.

In addition, those who want to turn to freelancing as the model continues to become more widespread may realise that they need to acquire new skills or refresh old ones. This will heighten the demand for programmes that provide such instruction—especially those that offer skills training remotely.  growing gig economy and tax system that rewards selfemployment
could hit the government’s coffers. Take the U.K for example. Jobs created by the likes of Uber and other gig economy mainstays flatter Britain’s unemployment rate, and have helped to smooth out the worst effects of the financial crisis. However, the less pleasant implications of a  surging gig economy are now dawning on the government, where a lessened regular workforce exposed a potential 3.5 billion pound gap in tax receipts by 2022. 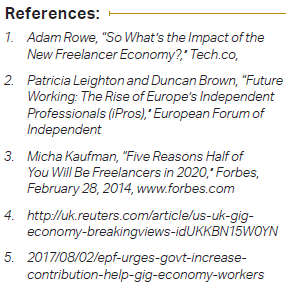 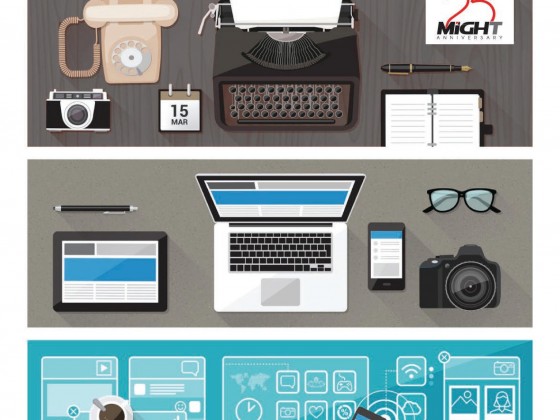 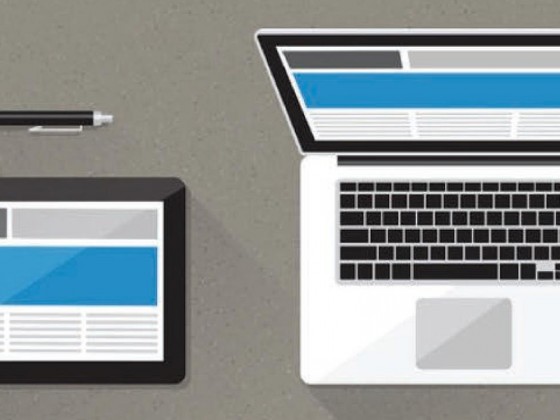 The Future of Work: How Can We Navigate Through Disruptiveness of 4lR