In 2016, I decided to leave the United States and move to Malaysia. Faced with packing almost half a century’s worth of accumulated “stuff,” and paying exorbitant fees to ship it halfway across the world, I decided to get tough; only my most important items would go with me. I arrived in Penang with two suitcases, followed by half a dozen small shipping cartons containing family mementos and pictures I’d always meant to digitize. Everything else had been sold, donated to charity, or given to friends. I tried to reduce what needed to be thrown away, but some things,
inevitably, ended up in a landfill or recycling center.

What this experience taught me was how much of what I’d accumulated over the years was unimportant— and how little thought I’d given to what would happen when I no longer needed it. I had not been a “conscious consumer.”

Conscious consumerism is nothing new. In 1972, two professors from The University of Texas at Austin wrote an article for the Journal of Marketing entitled ‘The Socially Conscious Consumer,’ in which they stated that high socially conscious individuals differed from most other people in some significant ways:

Back then, the people most likely to “look beyond the label” when making purchasing decisions, were a fringe, elite group.

That’s not the case today.

Researchers for Euromonitor International recently listed ‘Conscious Consumer’ in their Top 10 Global Consumer Trends 2019 report. This is someone who votes with their wallets by opting for plant-based foods, not only out of concern for their health but also animal welfare. They shun companies that engage in, or are complicit with, child labour, human rights violations, polluting rivers and seas, and other anti-social, unethical activities. Many use online sites and apps like Buycott.com, DoneGood.co, and NatureHub.com to help them identify sustainable businesses.

Not everyone agrees that personal consumer responsibility is enough to make a difference, however. After all, I might ask vendors not to automatically plop a plastic straw in every drink I order at a restaurant; refuse plastic bags at the wet market, using my Helping Hands Penan shopping bag instead; buy bulk goods from stores such as NUDE Zero-Waste; and support H&M because of their “Conscious Collection” and commitment to creating raw materials and new products out of old clothes and home textiles that otherwise would have ended up in a landfill. But am I really moving the needle with respect to saving the planet?

Evidence shows that coalitions of government, industry and social action groups have a part to play in helping to positively influence consumer behavior. For example, in our book Transform Tomorrow: Awakening the Super Saver in Pursuit of Retirement Readiness, co-author Stig Nybo and I looked at ways in which Americans could be persuaded to change the abysmal savings culture of the U.S. We cited several highly successful public service campaigns that ran on a variety of socially important topics, including one initiated in 1961 entitled Keep America Beautiful (KAB.org). This collaboration involved businesses like Coca-Cola, Philip Morris and Anheuser-Busch, as well as the wife of then-President Lyndon B. Johnson—Lady Bird Johnson—who came together to help combat the U.S.’s littering epidemic. The Ad Council produced a TV advertisement known as The Crying Indian which aired on Earth Day, 1971 and can still be seen on YouTube: https://youtu.be/j7OHG7tHrNM. According to a later study funded by KAB, overall littering subsequently dropped by 61 percent, and in the case of beverage containers almost 75 percent.

Here are three further examples of initiatives that are happening today, worldwide:

Statista recently produced a chart showing China leading the way in terms of the number of plug-in electric passenger cars sold in 2018. But what was perhaps more remarkable is the fact that, “every second newly registered car in Norway is battery-driven – a market share that seems unthinkable in most other markets for now .” More recent reporting suggests that Norwegian figure is closer to 60 percent.

What helped to spearhead this huge uptick in the purchase of plug-in electric cars in Norway was its government’s “EV incentives,” in support of a national goal that all cars sold by 2025 will be zero-emission. 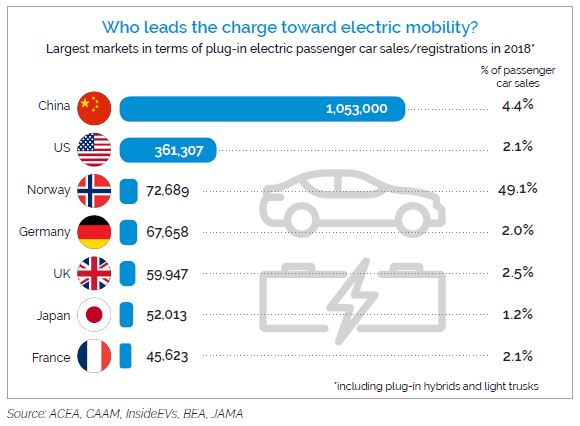 While Norwegians are some of the wealthiest consumers in the world, their government’s decision to reduce or
eliminate relevant taxes and charges, as well as implement other financial incentives, seems to have contributed to the decision by consumers to choose electric cars. Similar approaches could be adopted by other countries serious about influencing consumer behaviour in the right direction. For example, when UK drivers were asked what it would take for them to buy a battery electric vehicle over a fossil-fuel alternative, the top response was that it needed to cost the same or less than petrol/diesel.

The goal of the China Dream initiative, according to a United Nations Environmental Program report entitled Fostering & Communicating Sustainable Lifestyles: Principles and Emerging Practices, is to “reshape the desires of the emerging middle class” in China. Since its inception in 2007, JUCCCE (the Joint USChina Cooperation on Clean Energy) has perfected a culturally-specific approach to Western depictions of “having more,” in favour of “living more.” Since “concern for environmental consequences” was found not to be sufficiently motivating for Chinese consumers to change their purchasing behaviour, the initiative highlighted the impact of green energy on traditional Chinese values of community, family, happiness and prosperity.

As one example, JUCCCE’s Energy Efficient Lighting Project replaced over four million traditional light bulbs with compact fluorescent lamps (CFLs) since, according to one of its partners, Philips, “they use up to 75 percent less energy and can last 6 to 15 times longer.”

This measure to influence Chinese consumers’ choice of light bulbs bought involved workshops, advertising, artistic works and community events through a collaboration between:

Toss it? No way! That’s the motto of the Repair Café International Foundation that helps consumers see how what they already own could be repaired rather than thrown away. After all, conscious consumerism is not just about what you buy, but how long you can make those products last, and how you can help reduce waste overall. The concept, which originated in the Netherlands in 2011, is now in 29 countries, including Brazil, Ghana and Singapore. (In KL and Petaling Jaya, an independent, small-scale initiative exists, known as KakiRepair by KakiDIY.)

Repair Cafés do more than simply help people repair broken bicycles, food blenders, irons, televisions, smartphones and other electronic gadgetry that would otherwise end up in a landfill. (Sidenote: The United States generated 11.7 million tons of e-waste in 2014, just under 30 percent of the world’s total. Roughly 80 percent of U.S. e-waste is said to have been exported to Asia. Recent government restrictions in the region, “may be a turning point that forces the world’s major producers to finally reckon with the true social costs of waste ” in their own backyards). According to one study, the top three reasons why people engage in Repair Cafés are to:

• Spread the message of sustainable living to others
• Provide a valuable community service, that doesn’t just repair things, but avoids “throwing away people with the skills to fix them.”
• Become part of a movement for social change. The FixIt Selfie campaign, for example, encouraged people to upload images of items they’d fixed, and attach them to a petition to the EU demanding action to cut waste.

Such grassroots activities require funding, in this case financial backing from the foundation associated with the Dutch Postcode Lottery . Licensed in the Netherlands by the Minister of Justice, 50 percent of lottery revenues is donated to charities in the areas of conservation, environmental protection, and development aid.

I suggest today’s rampant consumerism is an aberrant blip in human behaviour; the exception rather than the rule. I remember a time when paper straws were only used by children, sick adults or the elderly. Milk was delivered in re-usable glass bottles. We kids would supplement our pocket money with rebates for returning drink containers. I also remember my father, who worked in the grocery business, saying plastic was the worst thing to happen to the taste and longevity of products like cheese. People engaged in different behaviour back then; we can do so again.

Indeed, we need to look backwards for inspiration, as we try to advance toward a more sustainable future. This might sound like a strange thing for a futurist to say, but I believe that “mindful consumption” is our natural state. Greater governance and industry support can help us get back there. 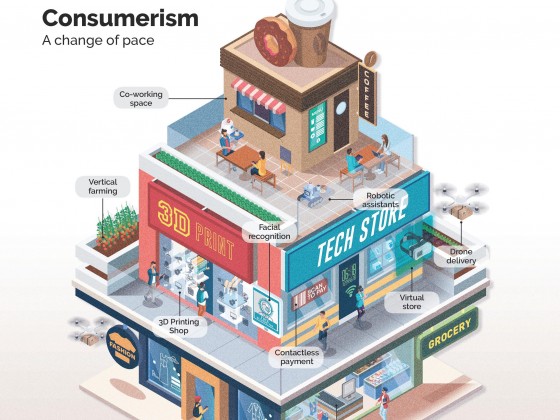 Consumerism : A Change of Pace

The freelance economy : Are we tuned up for it?