Azuraien Jaafar received her PhD in non-Newtonian flow studies, an MSc in CFD and a B.Eng in Mechanical Engineering and Mathematics. Apart from her technical expertise in rheology, waxy crude oil and emulsion studies, her work exposure has given her skills and experience on human capital development. She has published various established journals, held several copyrights and patents, and served as a technical advisor and consultant to several industry projects. She was attached to Universiti Teknologi PETRONAS until June 2019, where she was the Director for
the learning centre in Kuala Lumpur for industry professionals. She is currently an independent consultant and an active volunteer for UNHCR.

Nadia Mahmud is currently the Engagement and Communication personnel at the Centre for Advanced and Professional Education (CAPE), Universiti Teknologi PETRONAS. Her focus is on literary techniques, copywriting, and editing within an industrial context. Apart from that, her background comprises of plethoric writing, teaching for early learners, as well as various forms of journalism. She holds a Bachelor of Arts in Creative Writing and Journalism from Middlesex University, UK..

Labor markets are unveiling uneven landscapes with dramatic transformation. Conventional employment is being supplemented or replaced by contracting gig “workers”, especially those mediated by online platforms. The trend of hiring gig or freelance workers is better known as the ‘freelance economy’, ‘gig economy’, ‘platform economy’, or ‘on-demand economy’. It involves temporary, flexible work arrangements with payment made based on tasks, assignments, or sales. While there are unskilled gig workers such as ride-hailing drivers, there are also a plethora of skilled gig opportunities available for data scientists, designers, copywriters, trainers, and coders among others. A recent rapid increase of 30% a year is also observed on digital platforms that serve as an intermediary for larger projects—which amounts to longer durations—with greater complexity and higher compensation; i.e. skilled job opportunities with longer commitments.

A report produced by the Mckinsey Global Institute in 2016 shows that 44% of freelance workers, on average out of the 5 countries surveyed (United States, France, Germany, Spain, Sweden and the United Kingdom) are committing to the freelance economy as a primary income with 30% doing it by choice while another 14% are those who are reluctant, i.e. out of necessity. 40% of the freelance workers are casual earners and rely on gig work as a supplemental income. 16% take uup extra jobs on top of full-time job commitments as they are financially tight. The data from the 2016 survey shows that services such as installation, maintenance and repair, as well as specialty retail top the income share in independent work. Note that only 15% of the gig workers from this survey earn an income via digital platforms. The remaining 30-42% share of the survey indicated that they were unaware of the utilisation of a digital platform to earn an income.

In the United States, the demographic of independent workers on a digital platform varies with the type of occupation. 74% of the earners in Upwork.com, a platform for skilled gig work, possess tertiary education. Additionally, more females are involved in selling goods on Etsy (80%) compared to engaging with Uber as earners (14%).

The freelance economy creates possibilities for new earning and has shown significant impact and involvement in countries, and by individuals within job sectors that are suffering from unemployment. Job opportunities on digital platforms provide the labour force with equitable access to opportunities from across the world. This applies even to the potential “employees” in the most remote of areas but with internet access, i.e. this opens up a fair share of opportunities for people to have jobs and income, albeit only part time.

The labour force population in Malaysia as of February 2019 stands at 15.54 million with the labour force participation rate (LFPR) of 68.5%. The World Bank projected that Malaysia’s economy will expand at a rate of 4.7 per cent in 2019 and 4.6 per cent in 2020. The country is expected to achieve a high-income nation status at some point between 2020 and 2024. With these developments and opportunities arising within the freelance economy, the human capital matrix is shifted to an unhackneyed landscape. There is a growing number of Malaysians in the cities who are self-employed. The age demography of the population is inclined to the younger cohorts below 35 years of age. The proportion of unskilled and skilled freelance earners, however, remains unclear. A

vailable online platforms can be broadly divided into three groups: asset rental platforms such as AirBnB; goods and services platforms such as Grab, Etsy and Shoppee; as well as labour services platform such as Upwork, Rev, Fiverr, Freelancer, Guru and PeoplePerHour. The iLabour research project led by Professor Vili Lehdonvirta at the Oxford Internet Institute provides an Online Labour Index of workers data collected from four of the largest online labour platforms. Recent data shows that the freelance population in Malaysia are involved mainly in writing and translation work, software development and technology, as well as creative and multimedia. Globally, the labour force in the United States dominates the freelance economy with most of the opportunities having an emphasis on the software development and technology – which is also the highest freelance opportunity available since 2016. 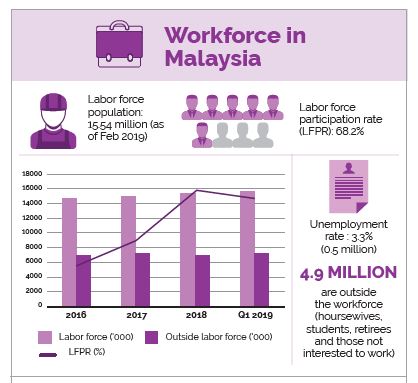 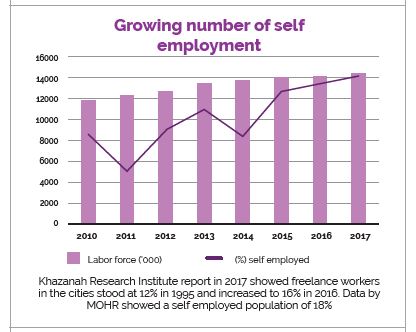 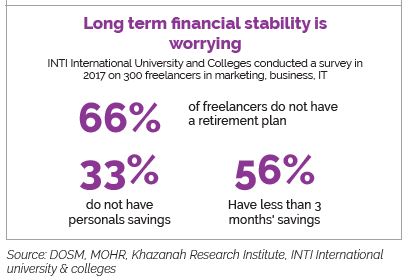 The recent industrial revolution driven by the era of internet has strongly influenced the Malaysian employment landscape. The current internet infiltration in Malaysia stands at 85.7% indicating the accessibility of Malaysians to embark on gig work available on digital platforms. The rise of the fifth generation of mobile network technology (5G), which the Malaysian Communications & Multimedia Commission (MCMC) anticipates to be fully ready by 2021, would enable applications to go beyond uploading and downloading. It also calls for live-streaming and real-time related applications such as the drone technology, virtual reality, and even self-driving vehicles. The new
capacity provided by the 5G technology would increase the potential of the freelance economy to greater heights. The current lack of coverage of Malaysian telco services in rural areas would also encourage a sizeable number of urbanisation in order for the population to enjoy the facility as well as participate in a technology facilitated workforce. The rapid growth of digital platforms as a result of fast internet capacity will continue to intensify the participation of individuals into freelance work. However, this should not be considered as the sole driving factor. Data provided by the Department of Statistics Malaysia shows that the unemployment rate is high among those below 35 years of age. In other words, the rise of the freelance activity could also be attributed to the need to harness an income due to the lack of opportunities within a full time employment.

Even with tertiary education, individuals embarking on gig work are not considered as skilled workers by the Ministry of Human Resource. Being classified as self-employed, the gig workers are not entitled to receive worker’s rights to employment benefits such as healthcare, social security schemes (SOCSO), employment provident fund (EPF), overtime, holiday pay, minimum wage and other compensation fees. They are also subjected to less stability in the workforce and greater income volatility. Nevertheless, with jobs within the competitive fields being harder to obtain, the freelance economy is still an easy segue to making a living. The impact and the tectonic shifts imposed by the freelance economy is also felt by employers. The new business models thrown by competitive companies employing gig workers are making it attractive to employees. The employees can switch employers very quickly posing challenges to the firm to retain the right talent. The competition is now not only for the customers but also for the employees.

With jobs being displaced, the Malaysian population needs to take greater personal responsibility on their education. This is to realise their own potential as the work environment for the future will require more than just content knowledge. They need to continuously learn and relearn—lifelong learning—to be relevant and competitive. As an individual involved in the freelance economy, it will not always be rosy. One has to upskill to be the best to compete against the world. Until a
freelancer’s reputation is established, one ought to be continuously resilient. The survival skills required within the freelance economy emphasizes competencies beyond paper qualifications with a differentiated skill to be a bonus. Passive observers would lose out, and lack of awareness on the required skill sets and the opportunities arising from rapid cycles of obsolescence will increase the economic gaps in the Malaysian population.

The Malaysian education system needs to reconceptualise affirmative actions to center around enabling a system that will inculcate lifelong education, which encourages self-directed but supported learning. While STEM subjects as well as digital forms of literacy could remain as the essential core academic subjects, a dynamic modern curriculum which incorporates critical thinking, creativity, risk taking, critical conversation skills, negotiations skills and people management skills including leadership and empathy, innovation and entrepreneurship, would also be salient as these would be the key competencies of the future.

To encourage continuous learning to the mature population, adult learning styles will have to be well understood. Real world problems will need to permeate into the learning content with a more personalised approach to reflect the varying adult learners’ needs and pace. Adult learning assistance such as that provided by the HRDF should also be made available direct to the individual, in allowing greater access and individual learning responsibility. Data provided by PwC through their recent survey indicated that 74% believe that it is their own responsibility to upgrade their skills rather than relying on any employer; indicating an increased self-awareness and responsibility to realise their own aspirations.

While 30% of employers are strategizing future talent acquisitions following the emergence of the freelance economy, the employment law in Malaysia is still lacking. It has not been able to keep up with the same pace as the digital economy which is one of the main drivers in the freelance economy. A more proactive and dynamic approach may be required to compensate for the changing employment landscape in Malaysia, which is evolving alongside global megatrends. 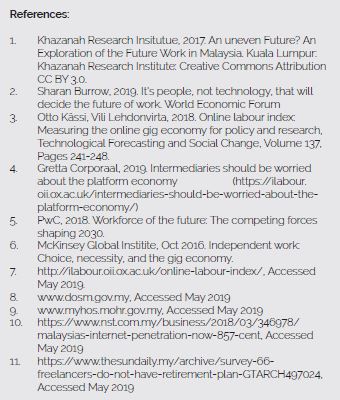 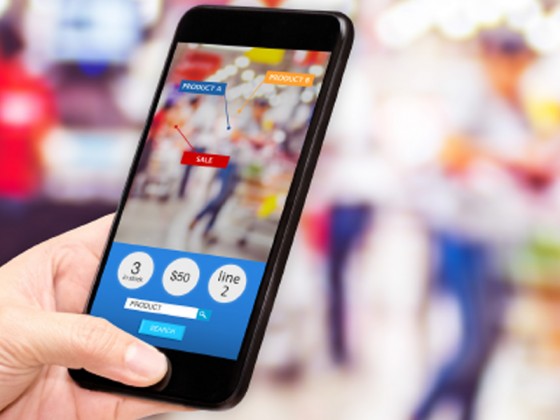