Blockchain and Distributed Ledger Technology (DLT) have generated phenomenal interests of late after a recent permutation (from their early Bitcoin association in 2009) is building up a potentially widespread cryptocurrency exploit. Based on current progress, blockchain’s development, which supports the emergence of person-to-person (p2p) and digitised technologies, could be best summarised by Gartner’s Emerging Technology Hype Cycle 2018 below. 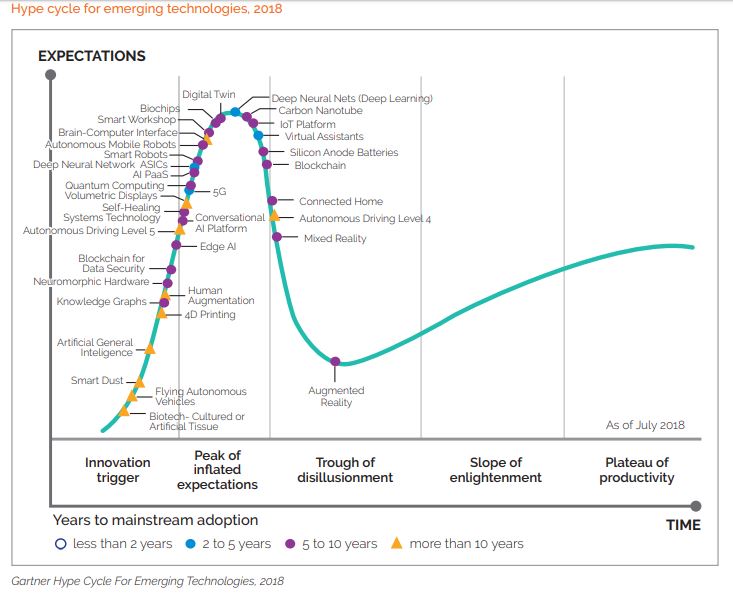 Although blockchain is a technology that is yet to mature, it is expanding rapidly alongside other digitised technologies such as Digital Twin, IoT and Knowledge Graph in scaling the global digitisation trend.

In view of this, conversations about blockchain have picked up steam over the last three years beyond fintech and various test cases have been deployed to understand its potential use and adoption. Hype and news about the technology have become more visible through the creation of new blockchain/cryptocurrencies focused digital media such as Coindesk, CCN and Cointelegraph. Some were created by evangelists and communities that thrive on the network effect of community meetups, communication channels such as Telegram, Wechat and Slack, with Reddit and Github frequently referenced for double checking the information. As the technology develops further, more information about the technology can be gleaned from mainstream media that have built a specific platform to cover related news such as Forbes Crypto. However, as the blockchain technology morphs at high velocity, some of the news that was published in the previous six months could be rendered less than half accurate, and readers are advised to be as open to new ideas as possible.

The above hype cycle, published by Gartner, detailed the development of blockchain applications in government sectors and other areas. (2) Mainstream adoption of use cases in government applications is expected to take another five to ten years, although currently some specific use cases involving blockchain, particularly in cryptocurrencies governance and law, have witnessed emerging economies such as Malta, Gibraltar and Bermuda, alongside more advanced countries such as Japan, Switzerland and Liechtenstein, take centre stage at the global level with efforts to host crypto currencies’ exchanges within a purpose-built
legal framework. (3) 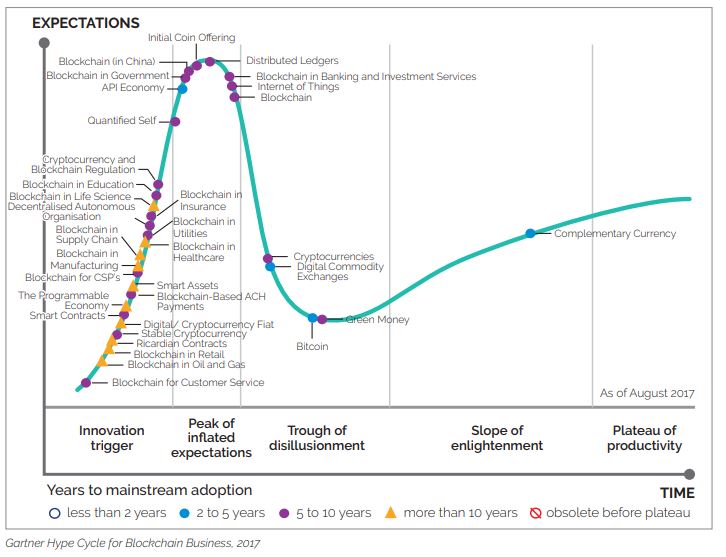 While still at an early stage, cryptocurrencies, or in many cases defined as “crypto-assets” are permeating mainstream financial platforms in 2018, and involvement of government supported organisations in cryptocurrency/ blockchain initiatives such as the creation of connecting platform Bakkt by Intercontinental Exchange (ICE) that owns the New York Stock Exchange may signal about the increasing acceptance in the mainstream financial transactions (4). To draw on the technology’s potential, early discussions about governments’ involvement have mainly focused on regulations around cryptocurrencies and tokenisation efforts. While the strategy is more about collaborating than competing, the adoption of applications for governments in areas such as attestation are becoming more common
as governments and International Bodies such as United Nations CEFACT published the whitepaper on blockchain (5) and International Organisation for Standardisation’s (ISO) created TC 307 committee on Blockchain and Distributed Ledger Technology (6) . These global platforms were created for nations to discuss the impact of the technology before setting a common standard for cross boundary transactions, with major impact expected on global trade and services, identity management as well as related issues involving security and data privacy etc. Meanwhile, the World Economic Forum (WEF) 2018 has also explored decentralisation through its theme “Creating a Shared Future in a Fractured World”. Within this context, many emerging economies find that formulating policy framework and strategies to create a sustainable future require a re-examination of current assumptions. Before cryptocurrencies become a mass movement, governments need to think through how adopting the technology would catalyse the effort. (7)

This approach is very much relevant for a developing country like Malaysia. Government involvement in blockchain needs to be guided by the overall policy framework concerning the country’s future that sets the context for the adoption of use cases for itself (public) and its roles in promoting industries’ adoption (private).

When the elements are inspected in this perspective, Malaysia needs to balance its internal needs in relation to its role among ASEAN neighbours and at a larger global level. Adoption of the technology does not only mean adopting the use cases for the sake of adopting a new technology, but it must exert a strategic impact over medium and long terms.

Some of the areas that have been a huge challenge for governments where it could also benefit from blockchain is managing government funding and procurement. The supply side of blockchain promotes transparency, traceability and cost savings for government procurement, but before it is done, consideration must be given to the current system, and the added “weight” to transaction time, cost and interoperability, which may narrow down its effectiveness to specific types of transactions.

One potential recipient could involve the Malaysian Industrial Collaboration Programme (ICP) under the Technology Depository Agency (TDA) Ministry of Finance. It manages the Economic Enhancement Programme (EEP), Offset and Countertrade programmes for government procurement above RM100million (EEO) and RM 50million for Offset and Countertrade. The high floor limit would help justify the added cost to the process, while focusing on high value procurement and transactions on blockchain would keep the transactions transparent  and traceable. (8)

Likewise, another potential application would be the registration of companies on the 1-innocert certification programme. The programme, anchored by SMECorp and SIRIM, was developed with MIGHT’s inputs to foster innovation among homegrown companies through fast track funding and market access program. (9) What’s less recognised is that recipients must be Malaysian companies that have been in operation for at least two years with one year audited account. From the point of enterprising, certified companies would not be a fly by night companies, and putting the certification process on blockchain could become a verification of the legitimacy of the certification process and could be used as an added value in promoting these companies at global market.

Beyond financial transactions, another potential use case for Malaysia is to solve the high rate of accidents and fatality from traffic collisions. Statistics from 2013 World Health Organisation (WHO), stated that Malaysia was among the highest ranked countries with the riskiest roads after Thailand and South Africa at 23 deaths per 100,000 population. The Malaysian Institute Road Safety Research (MIROS) research showed that 80.6% of road accidents were attributed to human errors. (9). Thus, collecting engine and drivers’ data using blockchain and other technologies could help companies and authorities mitigate the human risk element through an early warning system. Over the long run, it could also help transportation companies manage their risks and bring insurance costs down.

These are a few examples where blockchain could be used to address the challenges that are specific to Malaysia. There are many other instances of how the technology could be used to solve other challenges at hand in the government system, and they might be different than how more developed countries are deploying it. Perhaps Malaysia could test the viability of these ideas and applications through pilot projects before committing to any definite course of action.

On deployment by the government, both Bank Negara Malaysia and the Securities Commission have created a benchmark and have led the way in creating the regulatory sandbox for testing ideas in a controlled environment, which could be adapted to suit the non financial ecosystem.

As the clock ticks down, although there appears to be many pockets of opportunities, there are still many technological challenges that need to be solved before blockchain and DLT could be adopted. Interoperability, scalability, cost, reliability, cybersecurity, and in fact sustainability are some of the topics that are being discussed currently by communities and other commercial setups.

In essence, blockchain should be looked at as the opening up of an opportunity to test the idea of decentralisation and its processes in managing the nation. Certainly blockchain does not solve everything, but understanding the technology would help Malaysia to manage risks better in the future. On top of this comes the responsibility to shape an honest perception on the formulation of policy framework in the face of an ubiquitous technology disruption.

Trend analysis remains very much crucial in managing and mitigating risks for both businesses and
governments, but beyond this, governments need to look at blockchain beyond use cases but the fundamentals it represents decentralisation. 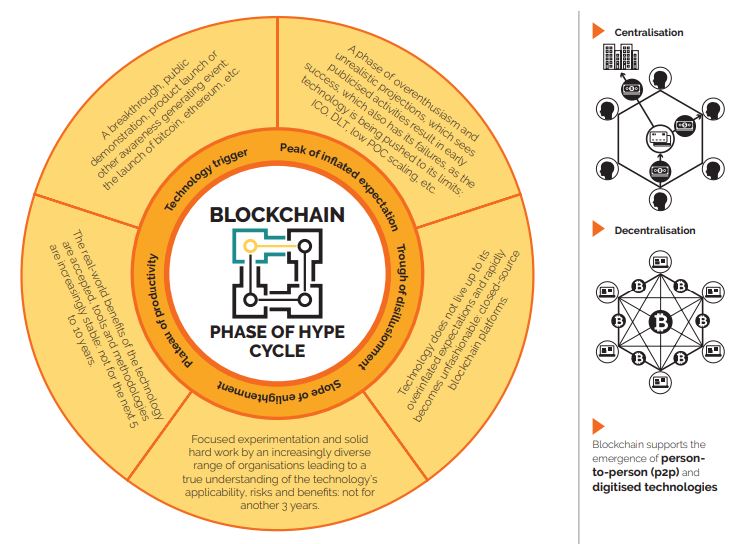 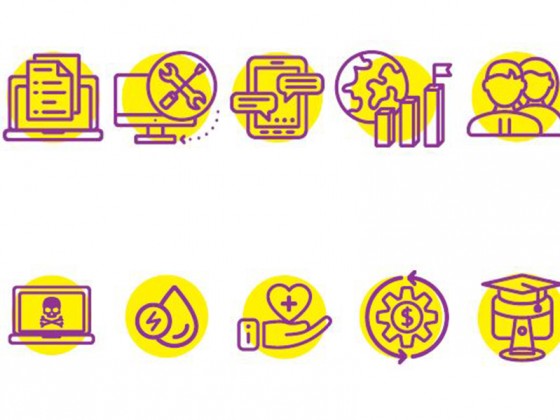 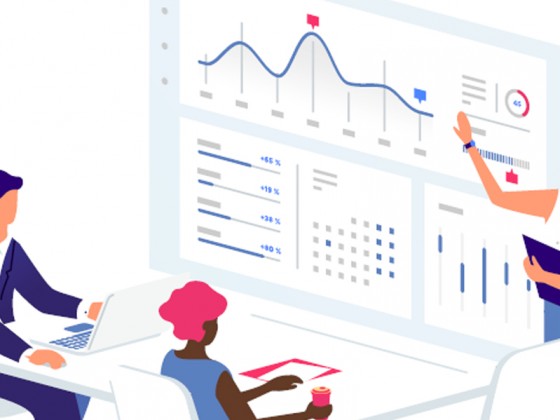 Technology, Government And Ownership Of The Future : The Never-Ending Quest And The Demand For Social Responsibility