DIGITAL PAYMENTS FOR MALAYSIA
Whenever Malaysians are reminded to change our debit and credit cards into pin-enabled version before 1 January 2017, we should realise that it is a step closer towards building Malaysia as a cashless society by 2020. Under the Malaysia Financial Sector Blueprint 2011 – 2020, Malaysia is targeting to increase the number of electronic payments per capita from 44 in 2010 to 200 by 2020, which is comparable to the e-payment transactions per capita of the more developed countries. In the works, the industry-wide PIN & PAY initiative will ensure that all cards transactions in Malaysia will be based on PIN only beginning 2017. Towards 2020, Malaysia is looking at the mainstreaming of mobile wallet as depicted in the graphic below. 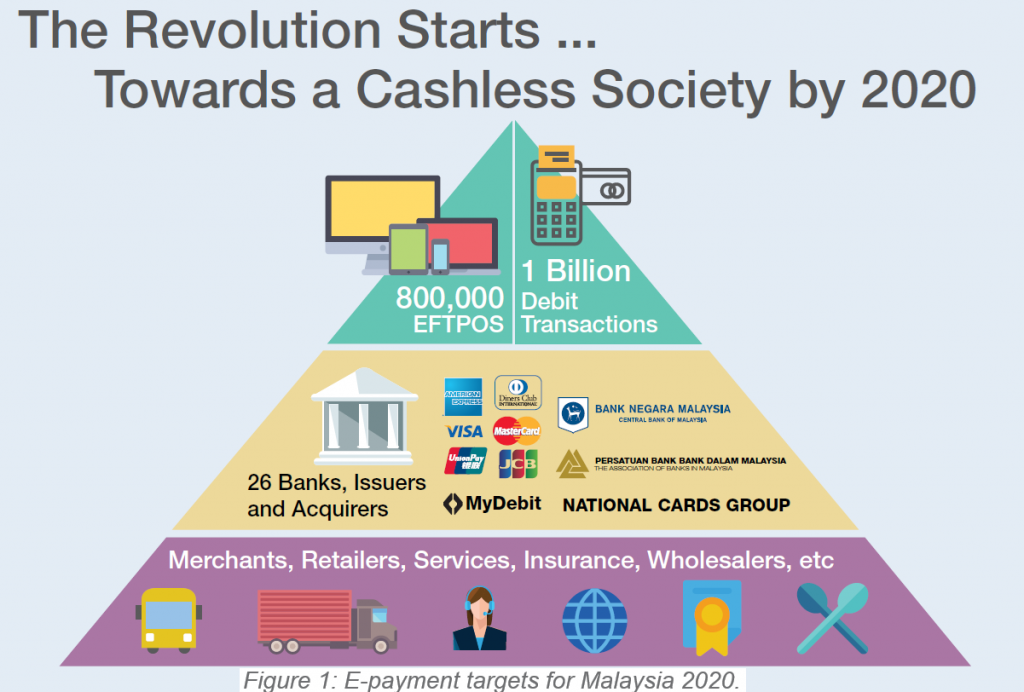 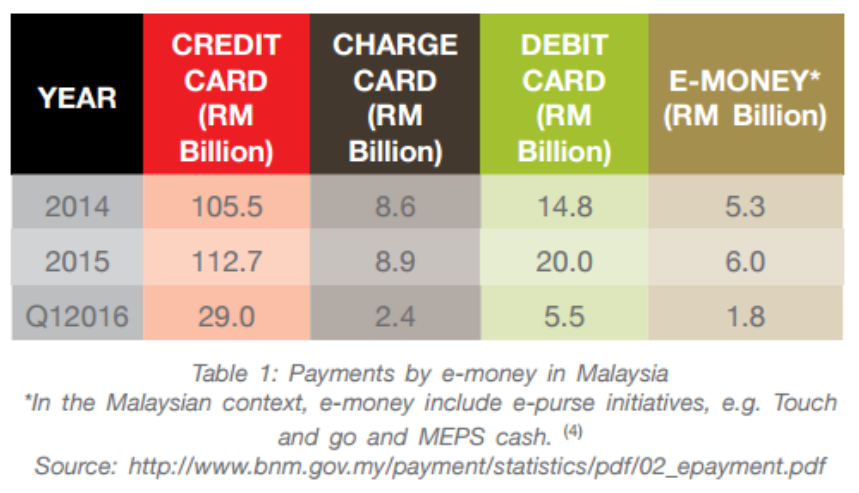 The huge gap has led to efforts by the banking and payment industry to introduce the electronic payments to the rakyat affecting changes to the most common payment instruments, i.e credit, charge and debit cards for biggest impact. As detailed in the data below, credit-oriented transactions dominates the Malaysian e-payment landscape, with e-money in particular, trailing at a distant.

IS DIGITAL MONEY REAL MONEY?
“Money” or more precisely, fiat money as we know it, is not a store of value. It is a claim upon value.  Money is technology. While the role remains the same, what we’re witnessing is the change of instruments.

In the long history of money, human have been changing their payment instruments by adopting technologies that provide preferred convenience and ease of transaction. Shells were superseded by coins, printing press made possible paper money that replaced coins, ebanking relegates cheques into a smaller role, and now contactless payment is already making ways to replace cash. Although contactless and mobile wallet currently sounds like the future, we should expect other changes in the future.

As far as electronic money or e-money is concern, Malaysia defines it as designated payment instrument (DPI) under the Financial Services Act 2010 (FSA) i.e.“any instrument, whether tangible or intangible, that enables a person to obtain money, goods and services to make any payment”. At retail level, it is mostly commonly used in the form of money balance stored on microprocessors on stored-value cards such as Touch & Go and MEPS cash.

A FAIRLY RECENT INNOVATION
Globally, there are other changes that are taking place where digital money is concern. Unlike the above changes, it is taking place outside the “fiat money” system. It is called cryptocurrency or digital currency, and the first to bring about this change is called “Bitcoin”.

Although cryptocurrency has not developed substantially in Malaysia, Bitcoin and the underlying technology of public “Blockchain” are undergoing a very dynamic phase worldwide under the banner of financial technology or “fintech”. Bitcoin was introduced in 2008 by an unidentified entity named Satoshi Nakamoto. Bitcoin is an alternative electronic and mathematic -based payment system that thrives on privacywhereby IDs and not individual names. users are identified digital wallet . It is independent of any central authority – “decentralise”, immutable, more or less instantly, with very low transaction fees throughout the world. Fundamentally the concenpt of “trust” underlines the Bitcoin technology and digital currency economy.

The first Bitcoin exchange, Bitcoin Market was established in 2010 and the first famous pizza transaction took place on 22 May 2010 at 10,000 bitcoin – valued then as USD25 and USD4.4million on its 2016 anniversary. The bitcoin protocol however, limits the number of bitcoin to be created by miners to 21 million, effectively closing the quantitative easing option available in the fiat monetary system. (Full history at http://historyofbitcoin.org/)

Bitcoin adoption is still considered in infancy. Currently, including Bitcoin which accounts for approximately 80% of cryptocurrencies transaction, there are 697 currencies trading globally.

Besides playing the role of alternative currency (digital currency or crypto currency) and a means to minimise transaction costs, it has been mentioned as safe haven asset – the value increased substantially during the devaluation of Yuan and Brexit. On a different front, it has also been highlighted as a way to financial inclusion for the unbanked by facilitating remittance, such as the case for many overseas foreign worker (OFW) from developing countries sending money to their families.

BITCOIN IN MALAYSIA
Bitcoin enables individuals and businesses to make direct peer-to -peer transactions in minutes and like other digital transactions are not limited by  geographical boundaries. It is not surprising that the ease of use have elevated the bitcoin transaction in China, whereby the Chinese Bitcoin exchanges now account for over 90 percent of global Bitcoin trading activity and approximately half of all global Bitcoin mining activity.  The transaction into Bitcoin monitoring is available at http://fiatleak.com/

What this means for Malaysia is the increasing impact on the Malaysian SMEs trading with Chinese traders with the preferred option to trade in Bitcoin. This effect has been noted by Malaysia’s first Bitcoin exchange, Bitx which transact in Ringgit (https://www.bitx.co/in/ my/en/). With China’s position as Malaysia’s biggest trading partner, Bitcoin transaction has the potential to help expand the bilateral trade between the two countries by facilitating the remittance, particularly for SMEs.

Bitcoin transactions in Malaysia is increasing, with an average value of RM 14 million per month, compared to an average of RM100,000 per month in 2015. The rise in value may not solely due to the rise in volume, as the value of Bitcoin price was lower as of December 2015 at USD428.61 compared to the current value of USD576.59 (August 20th 2016), a percentage is also attributed to price increase per unit. What’s definite is that there is an increase in interest and value for Malaysians to know and to start contemplating on the using an alternative digital currencies as a way of exchanging value. In finance this is called keeping one’s eggs in multiple baskets.

WHAT’S NEXT
Besides Fiat currencies, digital non-fiat currencies, comes the “Utility Settlement Coin” (USC) developed by a consortium of banks led by UBS of Switzerland. It is a digital cash equivalent of each of the major fiat currencies backed by central banks rather than a decentralized new digital currency such as bitcoin. The USC would be convertible at parity with a bank deposit in the corresponding currency, making it fully backed by cash assets at a central bank.

The Bitcoin and the underlying blockchain technology has opened up a new thinking and pathway about the way people CAN do their financial transaction. It is up to us to find out the better option by opening up to the new ways.

(4)  The Bank for International Settlements (BIS,1996), has defined electronic money as the monetary value measured in currency units stored in electronic form on an electronic device in the consumer’s possession. For the purpose of this study a working definition of e-money in the Malaysian context, is taken to include electronic purse initiatives such as MEPS cash and stored value cared such as Touch ‘n Go cards. http://www.bnm.gov.my/guidelines/00_general/payment/guidelines/gl_016_3.pdf/ 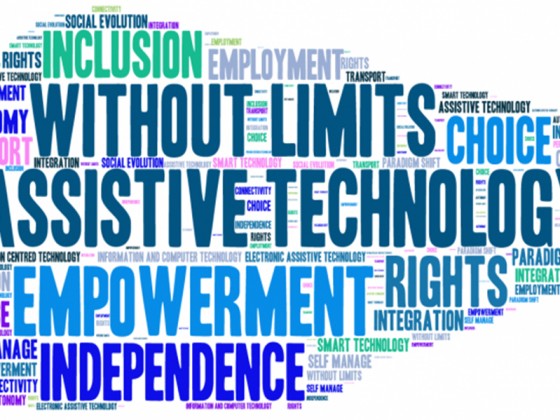 Assistance Technology: A Question of Trust