The longstanding, overarching business model in the electric power industry involves a combination of power generation, power distribution, and retail sales over a common electric grid. Rising demand for power and high credit ratings have enabled capital investments in new capacity with reliable long-range payback through a combination of regulated and unregulated income.

Now, despite the fact that global demand will continue to grow, a variety of technical and societal drivers are poised to create major disruption of this business model. In 2013, PwC conducted its 13th Annual Global Power & Utilities Survey with senior leaders from 53 power and utilities companies in 35 nations of Europe (including Russia), the Americas, Africa and the Middle East, and the Asia Pacific region.

Based on the results of this survey and other sources, this brief examines the forces driving change in the global power industry, potential outcomes, and implications for governments and the greater business community. 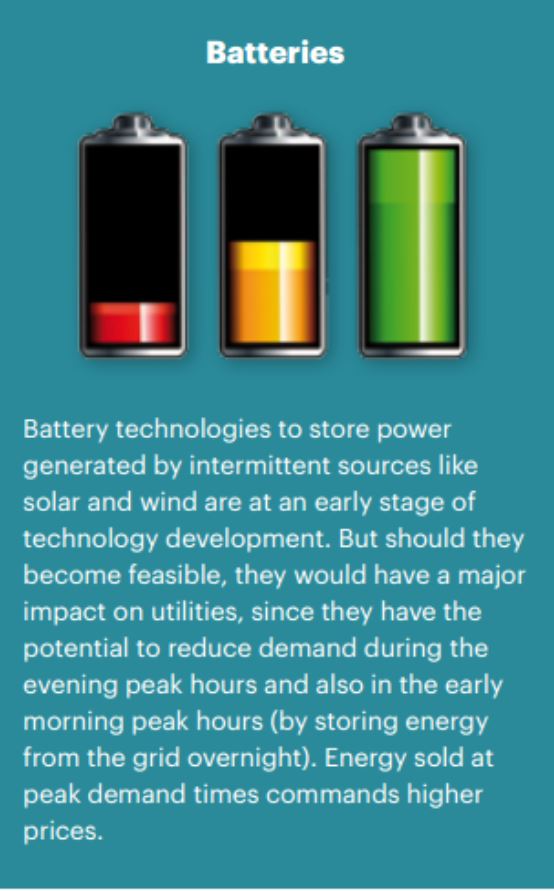 Although they serve a well-established global market experiencing increasing demand, an overwhelming 94% of power and utilities executives surveyed by PwC expect “complete transformation or important changes to the power utility business model.” Transformational change is most widely expected in Asia, followed by Europe, and least expected in the Middle East and Africa. A variety of driving forces are poised to disrupt the status quo.

Rise of renewable energy sources. Lower prices for solar panels and higher prices for electricity mean that solar power generation will become economically viable without subsidies. According to UBS Investment research, up to 18% of electricity demand in Germany, Italy, and (with a time delay) Spain could be met by unsubsidized solar. “On our estimates for 2020, electricity bills could be reduced by 20– 30%, and the payback time would be 5–6 years for commercial solar systems and 10–11 years for residential systems.”According to a September 2012 report from Citi Research, “Solar is already competitive versus domestic electricity prices for many countries, with many more to follow soon.” In Europe, demand for conventionally  generated electricity from the grid is also being reduced by subsidized renewable electricity generation (wind and biomass) and by energy efficiency programs.

Rise of distributed energy generation. While growth of distributed energy generation in Europe has been supported by subsidies, improving economics mean “we are likely to move into a phase where take-up is commercially and market-led.”According to the Edison Electric Institute, emerging technologies that could compete with utility-supplied power include solar photovoltaics, fuel cells, geothermal energy, wind, microturbines, battery storage, and electric vehicle enhanced storage. “As the cost curve for these technologies improves, they could directly threaten the centralized utility model.” (In the US currently less than 1% of total electrical load has been lost to distributed energy generation.) Two-thirds of PwC survey participants (including 82% of those in North America and 77% of those in Asia) expect that future energy demand will be met by a mixture of centralized and distributed generation.

Distributed energy generation creates price pressure. One of the key technical challenges facing distributed generation is the need to provide steady power even though most distributed sources operate intermittently. Meeting this challenge adds costs, creating a business challenge: prices rise for consumers who continue to use central electricity sources. (Often, under current regulatory schemes, distributed-energy customers are effectively subsidized by other customers.) There is the danger of a vicious cycle, as rising prices drive more consumers to distributed power solutions, making the grid more complex and further raising costs and prices.

Energy efficiency, demand-side management, and smart grids, along with falling prices for solar panels, are among the technologies survey respondents rate as having the greatest impact on their market. The Edison Electric Institute notes increasing interest in demand-side management on the part of customers, regulators, and political bodies in the US. A 2012 report from GTM Research argues that the addition of big data and analytics technologies gives smart grid technology the potential to completely reinvent the utility industry.

Shale gas and tight oil. The growth of the shale gas supply in North America is forcing revision of peak oil forecasts, allowing increased US coal exports, and putting North American energy independence within reach. One consequence has been lower European coal prices, making operating margins for coal plants in Europe higher than margins for gas- fired plants, and exacerbating forces leading to the closing of gas-fired power plants in Europe. Many other countries have shale gas resources, but the rate at which they are exploited will depend on local energy policies, economics, and politics.

Regulations. Globally, 68% of participants say that regulated energy tariffs are too low to cover the cost of new generation capacity, while 62% say that political and regulatory uncertainty are deterrents to developing large-scale new capacity. According to survey respondents, the most important policy approaches to ensuring that demand is met in future decades are “a regulatory environment that encourages network investment,” “increased interconnection,” and “fast-track planning and permitting for strategic infrastructure.”

Energy-saving, energy-generating consumers. Only 9% of respondents currently see customers actively engaged in energy saving and/ or energy generating, yet 41% believe their customers will be engaged in these activities 10 years from now.

These forces are poised to drive substantial change in the electric power industry. The good news is that fully 82% of PwC survey respondents regard distributed power generation as an opportunity; only 18% see it as a threat.

These driving forces are creating substantial business challenges; three challenges will have the most significant impact. 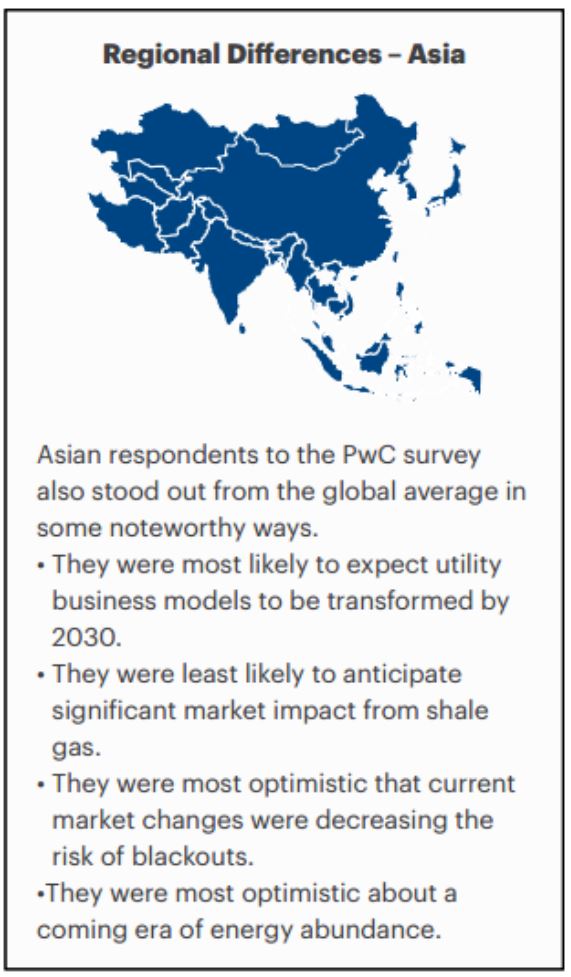 Major changes are anticipated for an industry that once was stable and changed slowly.

Participants in the PwC survey were presented with five scenarios about the future of the power industry and asked to evaluate their probability.

Particularly noteworthy are the relatively high probabilities assigned to scenario 3, the death of current business models in some markets; scenario 4, forecasting a new era of energy abundance; and scenario 5, suggesting that economic issues will prevent governments from successfully limiting global warming.

The changes coming to electric utilities will have implications for a wide variety of businesses and organizations. 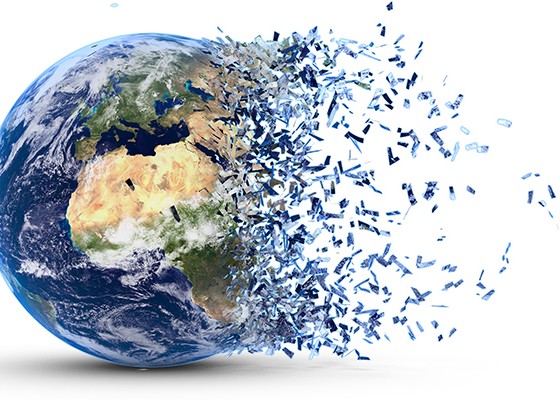 The World Getting Riskier 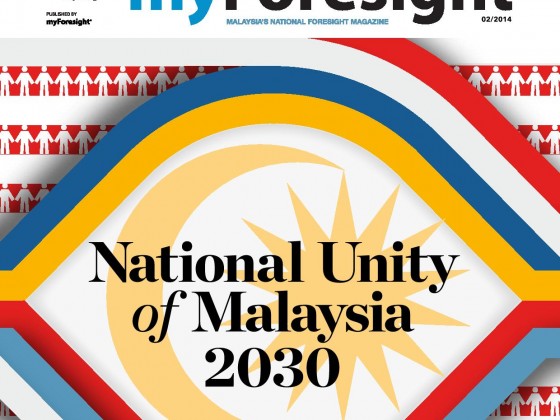