The world is slightly more at risk then it was a year ago, according to Global Risks 2013, the eighth annual edition of this authoritative series on global risk from the World Economic Forum (WEF). According to the 1,000-plus experts surveyed by WEF, almost all of the top 50 global risks identified in 2012 are deemed more likely to manifest in the next 10 years than they were in 2012. Many were seen as having greater potential impact than a year ago as well. Building on the survey data, the WEF called out three constellations of interrelated risks that it considers most urgent for political and business leaders to consider:

This myForesight® brief evaluates the WEF’s findings and assesses their implications for businesses.

The top five risks in 2013 are very similar to those in 2012. The few differences are meaningful in that they reflect shifts in the global understanding and conversations around these risks. Figure 1 presents the risks that experts deemed most likely to manifest in the next decade. Figure 2 lists the risks expected to have the greatest impact if they come about. Comparative rankings are presented from 2012.

Notable takeaways from the Top 5 lists include: 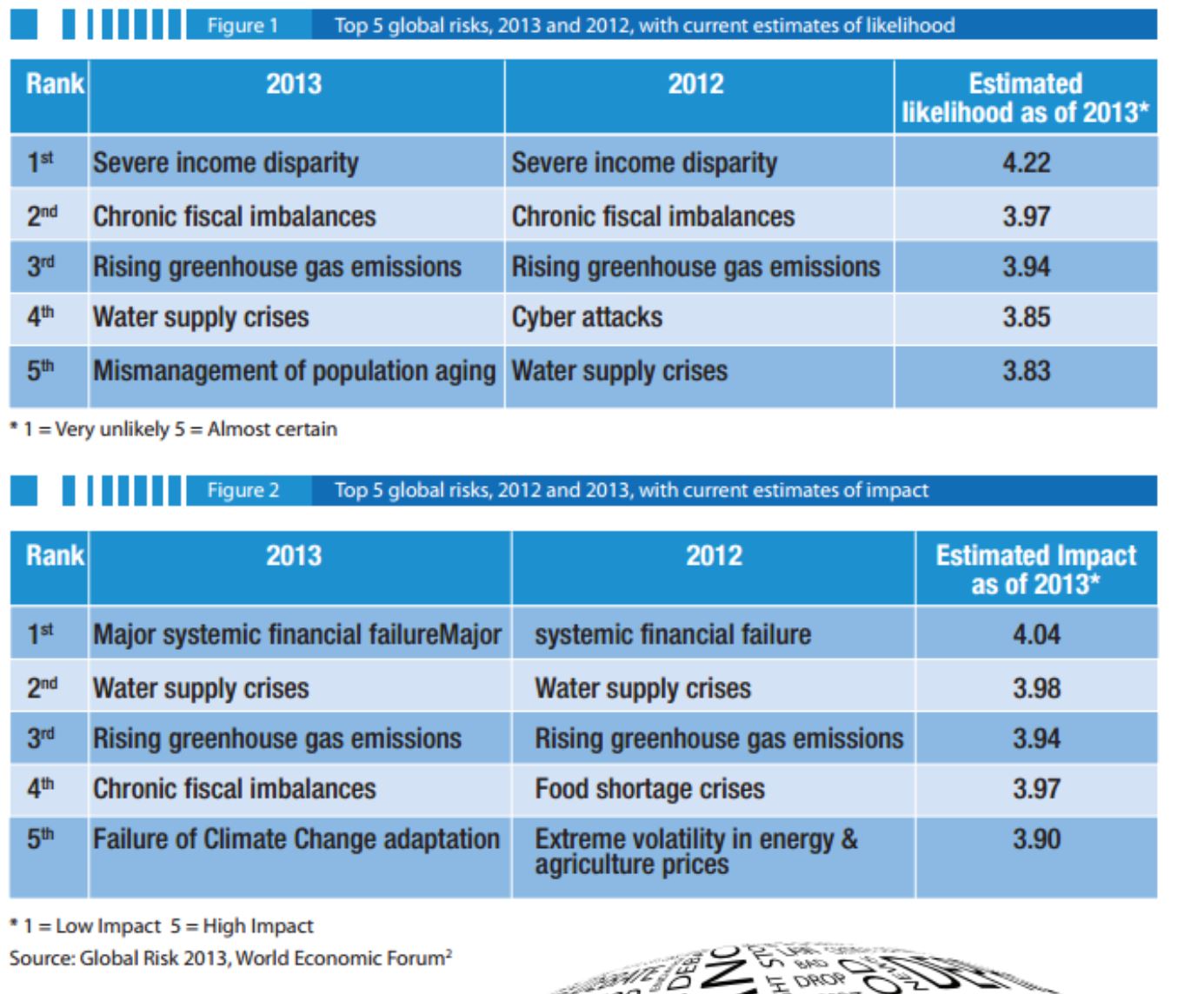 As noted, nearly all of the top 50 risks identified in 2012 were considered to have increased in both likelihood and impact by 2013. But some increased more than others. Figures 3 and 4 show those risks that changed the most between 2012 and 2013—giving a preview as to which risks are rising in importance and could move into the top ranks in the near future. 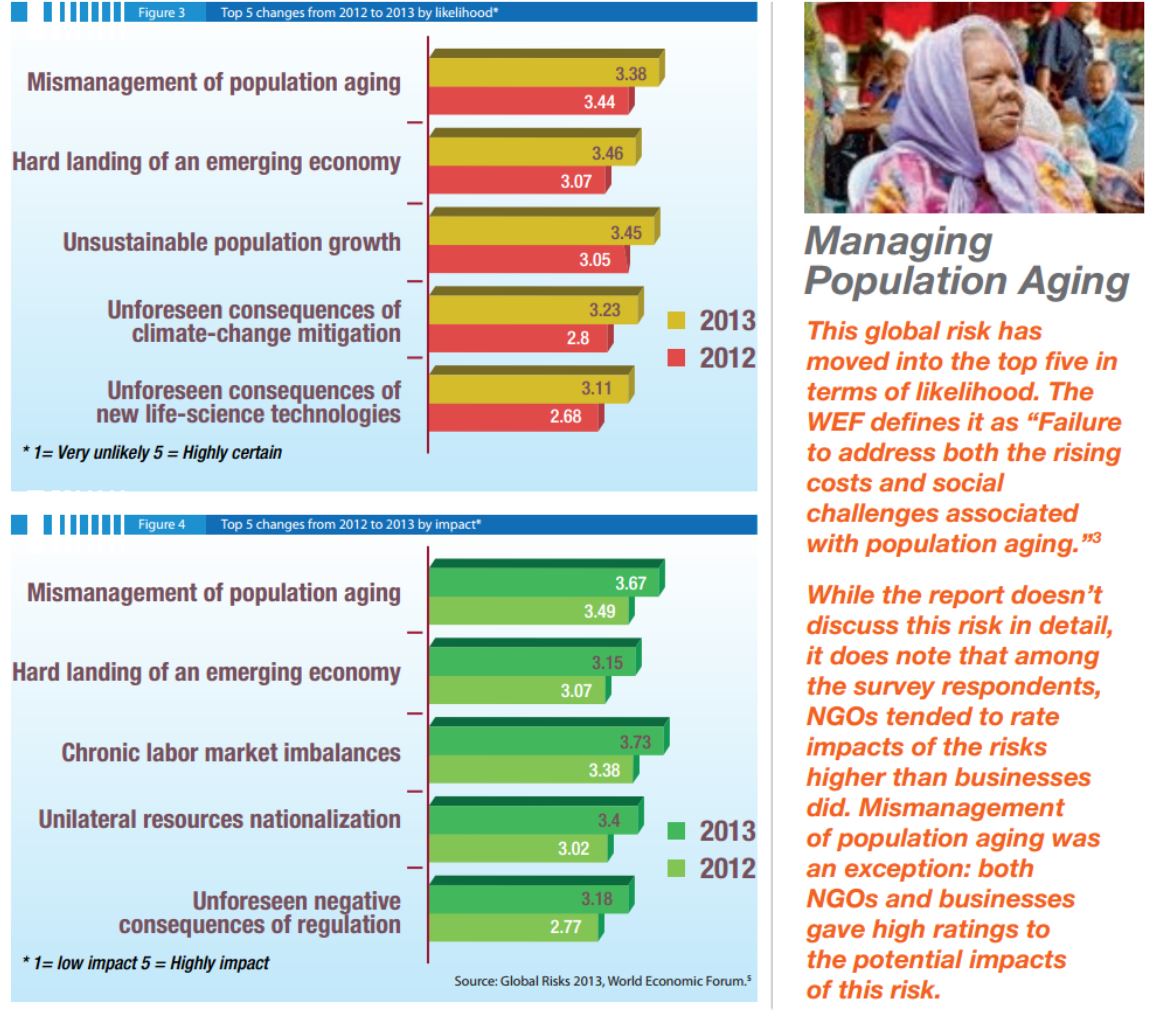 To help leaders make sense of the complex picture of global risks, many of which are interconnected and/ or mutually reinforcing, the WEF has winnowed from the data three constellations of risks that “warrant urgent attention and action by global leaders.” Unlike typical scenarios, these three risk cases do not set out a range of possible outcomes. Rather, they are “an exercise insense-making,” which the WEF urges leaders to use to refine their understandings and develop their own scenarios.The three risk cases can be summarized as:

Economic and environmental risks dominate the Top 5 lists, together comprising four of the five top risks by both likelihood and impact. Both of these major systems—the global economy and the global environment—are in grave need of strategic and structural reforms. But even more important than their individual fragility is their interdependence: each system’s problems are exacerbating the other’s an
d stalling effective problem-solving. As a result, a “daunting negative feedback loop” has begun:

The WEF sums it up: “A sudden and massive collapse on one front is certain to doom the other’s chance of developing an effective long- term solution.”

For nation-states and organizations seeking to manage risk, this situation presents a Gordian knot of choices, none of which promise clear benefits and all of which could carry unintended consequences. Yet the need for decisive action is urgent: without mitigation, the cumulative costs of climate change to just the health sector, food security, and the physical environment are estimated to be $2 trillion to $4 trillion by 2030.7 Thus, leaders must “embrace the need to make a decision without complete assurance that they are making the best decision.” Leaders of all kinds of organizations, public and private, need to adopt a “climate- smart” mindset—one that factors climate-change analysis into both strategic and operational decision- making.

The possibility of rapid, viral spread of misinformation over the Internet could trigger a plethora of serious risks, from online terrorism to cyber-attacks, disruption of life-supporting infrastructure, and even government breakdown. These misinformation memes could turn into “digital wildfires” that wreak havoc in the real world. 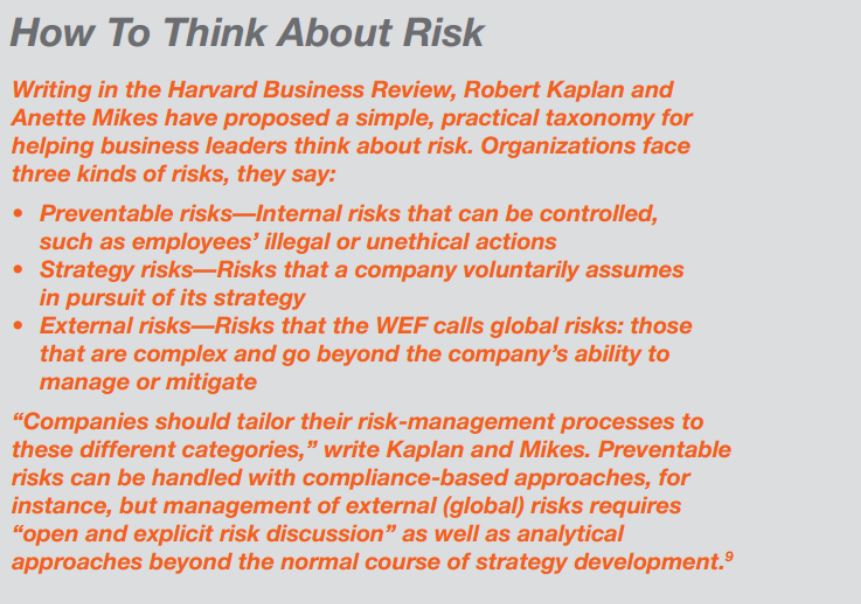 The WEF suggests that viral misinformation can be most dangerous in three kinds of circumstances:

How might digital wildfires be prevented or contained? The WEF points to a number of possible approaches:

The rise of “superbugs” that are resistant to both existing and emerging antibiotic drugs could spell the end of an era of security against killer bacteria. The WEF observes, “Experts are starting to take seriously a scenario in which all antibiotics are rendered ineffective for treating even common infections.”The consequences could be massive. Antibiotics are not just about treating infections; they are crucial to a wide range of surgeries, organ transplants, the survival of premature babies, and even some chronic diseases. And they are also vital to livestock and fish production, where the end of antibiotics would mean drastic reforms to food and livestock production and trade.What can be done to curb the rise of antibiotic-resistant bacteria? A number of ideas are being tried: 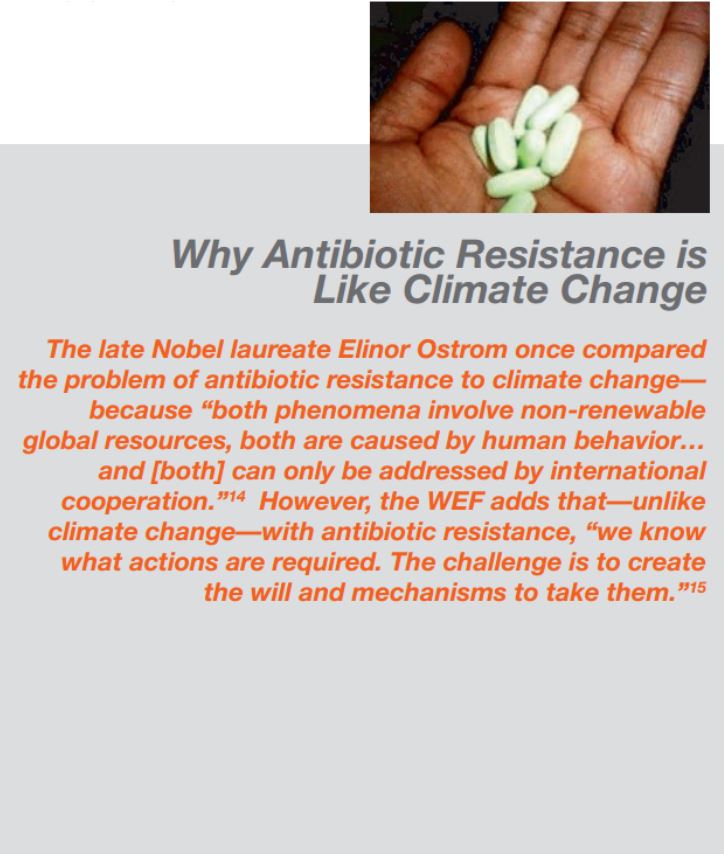 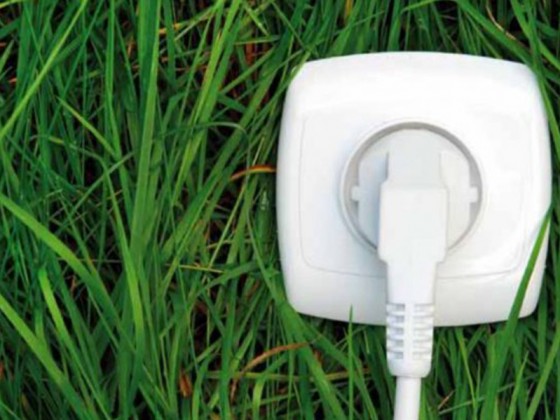