It was last year when scientists in China developed several types of rice that can be grown in seawater, potentially creating enough food for 200 million people. Researchers have been trying to grow the grain in salty water for decades but have only now developed varieties that could be commercially viable. The rice was grown in a field near the Yellow Sea coastal city of Qingdao in China’s eastern Shandong province. Different types of the grain were planted to investigate which would grow best in salty conditions. Back home, agriculture remains an important part of the nation’s economy in the new millennium for a growing populace with the challenge to provide both food security and food safety (FSFS), as well as sustainable development and wealth creation. Switching from conventional farming to high technology farming is important to meet food supply needs in line with the increase in the country’s population. Food production must be increased to assure self-sufficiency for the coming generations. The need for more food produced more efficiently—coupled with escalating demands that food need to be produced more sustainably—is driving the development of new technologies aimed at intensifying the efficiency of farms and farming. Some of these farming innovations involve bringing to bear new data-driven insights to improve operations, reduce waste and losses. Others involve adopting new technologies—drones and robotics, sensors and monitors, augmented reality software, as well as focusing on increasing overall agricultural productivity.

A number of compelling demographic, economic and social factors are driving the innovation of several technological solutions to modernise farming tools, methods and technology:

The Brookings Institution estimated that at the end of 2016, the size of the global middle class was about 3.2 billion people. Yet Brookings also projected that the global middle class would add another 160 million people every year over the next five years—a 25% increase in that time. Similarly, the population increase and middle-class expansion will raise the demand for both fresh produce and meat.

The amount of arable farmland is a finite resource, with just an estimated 40% of the world’s land available to grow crops. Though the demand for food will continue to steadily increase in the coming years, at best, the amount of arable land will remain the same or otherwise shrink—thus adding an increasing urgency to improve agricultural efficiency.

As consumers and governments increasingly demand it, the push for more sustainable use of natural resources across all sectors of enterprises—especially agriculture, which accounts for one-third of global greenhouse emissions—will become more urgent over the next several decades. Sustainability imperatives encompass everything from energy use to reducing or eliminating waste, recycling and reuse to (as much as possible) participation in the circular economy. In agriculture, sustainability efforts focus not just on making the most out of the limited amount of available farmland, but also reducing the use of resources such as fresh water—70% of which is being used in agriculture.

Given the increasing demands of the global food system and the mounting pressure to become ever-more sustainable, a number of new technologies are becoming more prevalent in farming, especially on megafarms (large, factory farms). The need to expand skilled and semi-skilled labour force from the pool of human capital to replace foreign workers through technology intensification and innovation agro-food programmes is a serious undertaking. Fields such as farm management, precision farming, biotechnology, mechanisation and automation, bioinformatics, process engineering, food traceability system, entrepreneurship and development of product marketing have been identified as key areas to be focused on. After a succession of developments, the wave of big data may sweep farmers off their land, unless they mark out a course in good time and decide which problems digital technologies should address.

Farmers are increasingly using round-the-clock smart sensors to monitor real-time crop and livestock health, soil quality, and weather tracking sound, sight, or touch to provide constant and consistent observation and information about their farms. In addition to providing data that will feed smart (AI) systems to enable more efficient and effective farm management, 24/7 monitoring allows quicker, more efficient and appropriate responses and interventions to changing conditions that the sectors detect. A handful of farmers are employing sensors in agricultural equipment and machines, some are transported on drones or larger aircraft to collect data on soil, crops, and livestock to furnish aerial photographs, thermal images, near-infrared data and the likes. The rising use of sensors to monitor growth of crops and livestock will yield a deeper, more granular understanding of the relationship between a wide variety of growing conditions (soil composition, irrigation, light, temperature, diet, exercise, etc.) and agricultural productivity.

Fully autonomous or semi-autonomous (i.e., requiringthe presence of a human operator) robots, drones, and other intelligent farm machines augment efficiency and improve worker safety as well as save costs (especially labour costs). Indeed, many tasks once performed by farm hands—everything from milking cows to irrigation—have become almost fully automated on the contemporary farm. Over the next several years, agricultural robots will likely see improvements in miniaturisation, the integration of more sensor technology and communication, and efficient use of energy. In addition, upgrades will largely focus on improving navigation and manipulation in unstructured environments. As a result, robots on farms will take on an even greater share of hard manual labour—especially the more mundane chores of farming. In addition to taking on more tasks, robots and automated systems will become smarter. In strict productivity terms, as more and more robots perform autonomously, their sensors will allow them to accumulate an everexpanding set of data—which will in turn improve their ability to evaluate situations and use algorithms to make better decisions. Another example, a six-legged robot named Prospero is roaming test fields in the US, planting individual kernels of corn in exactly the right spot for the plant to take root. And for several years now, Prospero has been wandering the fields of Germany unassisted, testing the ground and picking weeds that threaten the main crop. Malaysia being one of the largest exporters of palm oil in the world—has launched a national IoT plan with agriculture as one of the priorities. It wants to ramp up farming capacities and envisions generating 1.4 billion (US$320 million) in 2020 with smart farming tech. MIMOS, the country’s ICT R&D centre, has developed an IoT platform that captures environmental data and shares it across agricultural producers, traders and suppliers. MIMOS is also trialling sensors in farms where IoT is being used to detect the right time to pollinate oil palm flowers where sensors will also be used to track the health of fish in breeding ponds and automate irrigation.

While sensors and robots will in themselves improve farming efficiency and compile massive amounts of useful data, it will require considerable analysis to convert the growing amount of big data available to farmers into actionable insights: relevant and usable information that helps them better manage operations. To create actionable insight out of data, analysts or their computers need to review all the data, decide what is relevant and important, make sense of what all the data means, and present both the data and its insights in ways that are meaningful to the intended users. For this reason, the coming years will see a profusion of technologies designed to channel analysis of farm related to big data toward making better decisions—decisions that will increase efficiency, save energy, manage risk, and optimise farming operations. 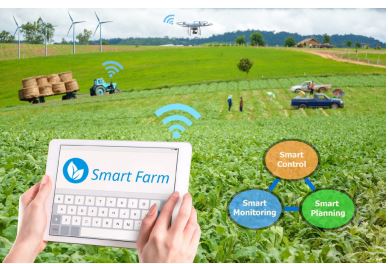 Smart farming—also called precision agriculture or lean farming—brings together many information technologies to improve the efficiency of agricultural production systems. Indeed, the key to precision farming technology is the application of real-time monitoring (through sensors) and data analysis, using algorithms that model and predict outcomes. Data-driven precision agriculture—coordinating detection, evaluation, decision rules, and the execution of actions—will not only allow farmers to reduce such operational costs as seed, feed, medication, harvesting, and energy expenditures, but also maximise yields and therefore profits. 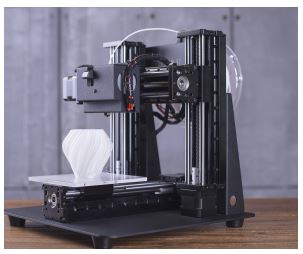 Offering both convenience and cost savings, 3D printing has limitless agricultural applications. Although once confined to moulding objects out of plastics, 3D printers can now create objects printed layer by layer from plastics, glass, metals, vegetable material, and even biological tissue like bones and organs, making the machines much more versatile for agricultural enterprises’ use. Virtually anything that can be designed using 3D CAD software can be printed on a 3D printer: gears, hinges, fixtures, mounting brackets, valves and hundreds of other objects and parts. The addition of one or more 3D printers on a farm can thus result in substantial time and money savings for farmers as the availability of spare parts in rural and often remote environments can be a real struggle. Farmers who own, share or use a 3D printer can therefore save time, money, and hassle by manufacturing their own agricultural tools, equipment and replacement parts for machineries (including drones and robots) that break down. The advent of 3D printers in farming may force agricultural equipment makers to rely more on know-how than manufacturing to generate revenue. Farmers making their own replacement parts and tools will have less need to buy the parts and tools themselves, but a greater need to buy the computer assisted design (CAD) software and specs that will allow them to manufacture what they need on their own.

Augmented reality (AR)—goggles or glasses that superimpose an overlay of explanatory data on what the viewer actually sees in real-time will also play an increasingly significant role in farm operations in coming years, both as information platforms and training tools. As monitoring becomes more prevalent on farms, AR will provide an ideal platform for delivering data collected on individual plants, animals, and farm operations. When looking at an individual corn, wheat plant or a cattle with AR goggles, the farmer has his vision augmented with a display of detailed information about the plant or livestock: the plant’s height and health, the soil’s water saturation and irrigation schedule, the animal’s registration number and information on its health status and diet—almost any fact about that plant or animal that has been digitally recorded. So while looking at each animal or plant, the farmer will be able to visualise key metrics and apply the knowledge immediately. In this way, AR will deliver actionable insights derived from Big Data precisely at the moment when the specific plant or animal in question is in front of the farmer.

Planting the seeds of the future

Modernisation that incorporates innovative new technologies into farm operations is much more than just a matter of staying on the cutting edge. It allows farmers and farm operators to cut operating costs, which in turn will enable farms to make their products more cost competitive. Nevertheless, what will be left for farmers to do when agriculture is digitalised and automated? Will they be reduced to servants of algorithms and of machines that require a few remaining manual manoeuvres, or will they take on a new role? Perhaps, this leaves farmers to assume the role of technically skilled researchers, as new diseases emerge, organisms migrate, and unusual cases and technical problems arise, our farmers may no longer steer tractors themselves, but they will still have to check the fields and stables, take care of specific tasks and improve systems interactively on an ongoing basis. 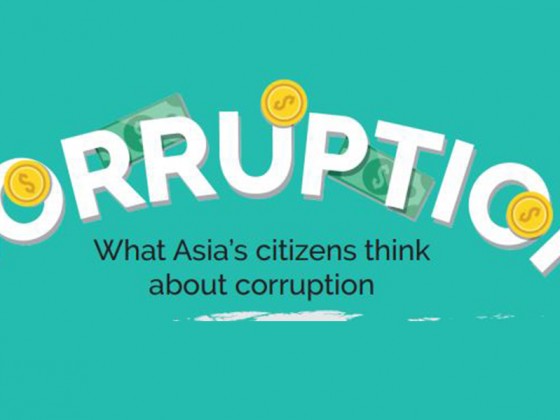 What Asia’s Citizens Think About Corruption 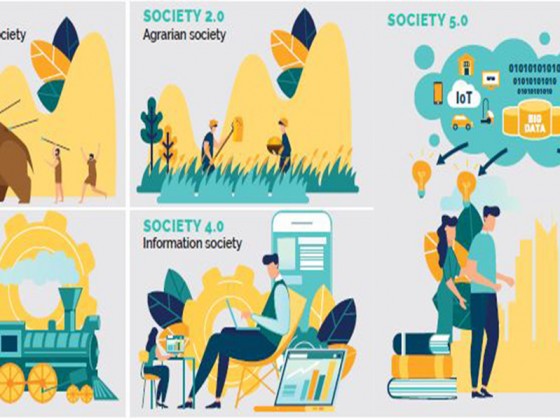