In the next 40 years the world will be transformed by demographic changes. According to a United Nations report in 2013, the current world population of 7.2 billion is projected to increase by one billion over the next 12 years and reach 9.6 billion by 2050.

The ratio of workingage people to retirees will be very different from what it is today. There will be a significant increase in the population older than 65 years. Policy makers are worried about the impact of this development on social security.Whilst employers are concern about the effect of the shrinking of the working-age population on budgets and type of services they can offer, and how to attract and retain younger talent; Oxford Martin Programme releases the result of a study that would change the whole job market scenario. The study, titled “The future of employment: how susceptible are jobs to computerization?” predicts that 47 percent of US jobs would be under threat from computerization. The study states that improvements in sensor technology will offer enough big data to engineers to help solve problems in robotic development that were  previously  holding  back  the  field. Jobs such as recreational therapists, emergency management directors and healthcare social workers to library technicians, data entry operators and telemarketers could be under serious threat.

Earlier, in 2013, McKinsey Global Institute projected that sophisticated algorithms could substitute for approximately 140 million full-time knowledge workers worldwide, and predicted that many low-wage manual jobs could diminish over time.

Improvements in sensor technology will offer enough big data to engineers to help solve problems in robotic development that were previously holding back the field. Fraud detection, pre-trial research in legal cases, stock-trading and patient-monitoring could soon be done by utilising software as algorithmic improvements would enable robots make better judgement compared to humans.

Not too long ago, self-driven vehicles were considered a far fetch idea. Today it is a realistic possibility. And, an algorithmic vehicle controller is able to monitor its environment to a degree that exceeds the capabilities of any human driver. Algorithms are thus potentially safer and more effective drivers than humans.

Productivity per worker needs to improve and production should be cost effective. 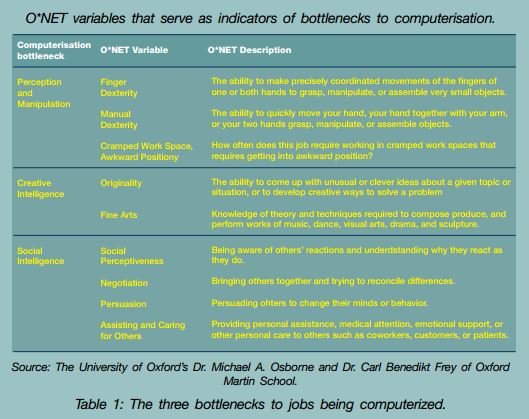 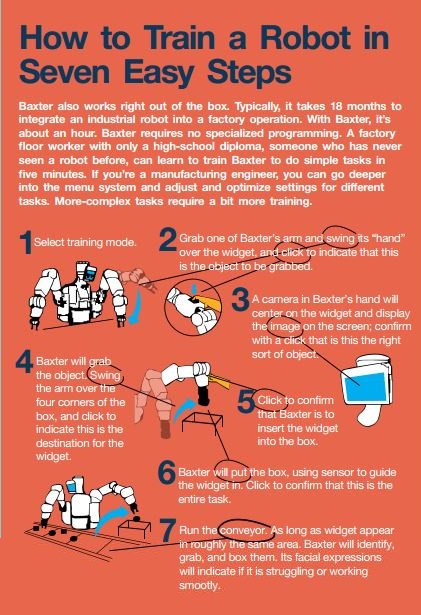 The  definition  of  “elsewhere”  has changed over time. After the end of World War II, there was an abundance of low-cost labour in Japan, so that was the “elsewhere” for manufacturing businesses. But as the Japanese economy recovered and the standard of living went up, the cost of making goods also went up. So low-cost manufacturing moved to South Korea. After the miracle of South Korea, it moved to Taiwan. When the standard of living there also went up, manufacturing moved to the province of Shenzhen in China.

Businesses are constantly chasing this low-cost labour — people who are willing to do difficult work producing low-value products with low wages. As the standard of living goes up in these places, education expands. That’s a good thing. But from the perspective of a manufacturer, a more intelligent and skilled workforce simply has less interest in these types of jobs. For example, iRobot, the company that produces Roomba robot vacuum cleaners in Shenzhen, was unable to increase production by adding another line because most of the workers had gone off to college.

Where will manufacturing activity go next? Thailand has had a tremendous industrial revolution in the last 30 years, as have Indonesia and Malaysia. Eventually, manufacturing will run out of places where there is low-cost labour.

The option is to automate low manual jobs. This is where industrial robotics has become the focus point.

Robotics automation in manufacturing is a complex and controversial subject in terms of sustainability and safety of humans, environment and businesses.

2.  A robot must obey the orders given to it by human beings except where such orders would conflict with the First  Law.

3.  A robot must protect its own existence as long as such protection  does  not  conflict  with the First or Second Law.

Asimov later adds a fourth law, known as ‘zeroth law’ to the list: A robot may not injure humanity or, through inaction, allow humanity to come to harm.

Is Malaysia one of the ‘elsewhere’?

Probably not: Manufacturing accounted for 24.5% of Malaysia’s GDP in 2013, ranking it second only to the service sector. Manufacturing sector in Malaysia is led by the electronics and electrical products (E&E) cluster. According to Oxford Business Group, in a report titled “Malaysia 2014”, Malaysian producers have strong research and development (R&D) capabilities and a high degree of automation in production that reduces the reliance on manual labour and provide better consistency in product quality.

The first industrial robot developed in the United States went to work in 1961 in Ewing, New Jersey, GM factory. Called the Unimate, it operated with a die-casting mould placing hot, forged car parts into a liquid bath to cool them. At that time industrial robots could not be equipped with computers as computers cost millions of dollars and filled a room. Sensors were also extremely expensive. So robots were effectively blind, very dumb, and did repeated actions following a trajectory. 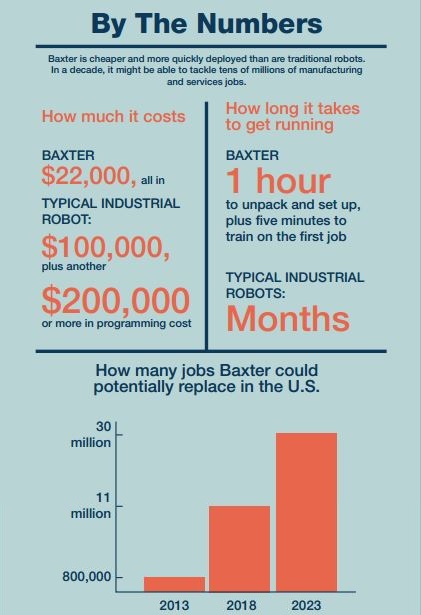 Industrial robots have not actually seen much innovation since the Unimate. These machines perform well on very narrowly defined, repeatable tasks. But they are not adaptable, flexible, or easy to use. Nor are most of these machines safe for people to be around.

Today, 70% of the industrial robots in existence are in automobile factories. They are either in the paint shop or the body shop. In a car factory, the body shop would be full of robots, but with no people; whilst at the final assembly would be human workers but no robots. Industrial robots and people don’t mix.

These machines are often heralded as money savers for factory owners and operators. But the cost to integrate one of today’s industrial robots into a factory operation is often three or five times the cost of the robot itself. It is a job that demands programmers, specialists, all sorts of people. And safety cages would have to be constructed around the robots so that the robots don’t strike people while operating.

Unlike human workers who can detect when they are about to hit something with their eyes, ears, or skin, most of these machines have no sensors or means to detect what is happening in their environment. They are not aware. All of this speaks to a larger and fundamental flaw with the way factory bots are built today.

In an increasingly interconnected world, industrial robots have not followed the information technology revolution. In our march to the future, we somehow left robots behind. There are no robots suitable safe and cheap enough for small businesses.

In the US alone, there are more than 300,000 small manufacturing companies with fewer than 500 employees. Almost none of these firms has an industrial robot, for some of the reasons outlined earlier. Almost all of these firms have relatively small production runs. That means they are constantly changing the design and manufacturing procedures for what they produce.

Some of these companies produce a wide variety of goods for other companies. They are sometimes called “job shops”. They specialize in manufacturing a type of product that can be highly customized to an individual client’s needs. In a typical factory with an industrial robot, a production run is rarely less than four months. For these “job shops”, a run can be as short as an hour. These 300,000 very small companies are the potential market for affordable industrial robots.

In September 2008, a company called Rethink Robotics was formed. It announced its first product launch – a robot named Baxter, a new type of industrial robot that sells for US$22,000 – on September 18, 2012.

Baxter is very different from existing industrial robots. It doesn’t need an expensive or elaborate safety cage, and factory operators don’t need to put it in a part of the factory where it is segregated from the rest of the workers. It is safe to share a workspace with.

Baxter also works right out of the box. Typically, it takes 18 months to integrate an industrial robot into a factory operation. With Baxter, it is about an hour. Baxter requires no specialized programming. A factory floor worker with only a high-school diploma, someone who has never seen a robot before, can learn to train Baxter to do simple tasks in five minutes. A manufacturing engineer would be able to go deeper into the menu system and adjust and optimize settings for different tasks. More-complex tasks require a bit more training.

Baxter is outfitted with a variety of sensors, including depth sensors as well cameras in its wrists, so it sees with its hands. It is constantly building and adjusting a mathematicaL model of the world in front of it, allowing it to recognize different objects.

Baxter is built for manufacturing, but its potential extends beyond factory work: It may revolutionize the use of robots in research settings. In the 1990s, the availability of low-cost mobile robots allowed thousands of researchers to work on a problem known as SLAM, Simultaneous Localization and Mapping. That led ultimately to the Google self-driving car. Now for the first time, thousands of researchers will be able to afford two-armed robots, which may lead to similarly important new research. Some of that research will seem crazy, silly, or even dumb, but out of that we will see new applications for two-armed robots interacting with people.

These applications exist in health care and eldercare, and a wide variety of other areas. We’ll find thousands of uses for this robot. We’ve only just begun.

Jobs requiring perception and manipulation, creative and social intelligence are those least likely to be disrupted by robotic innovations. Jobs that involved consulting other people, negotiating agreements, resolving problems and co-ordinating activities require a great deal of social intelligence, which computers are unlikely to take over. Most management, business, and finance occupations which are intensive in generalist tasks still need human intelligence. 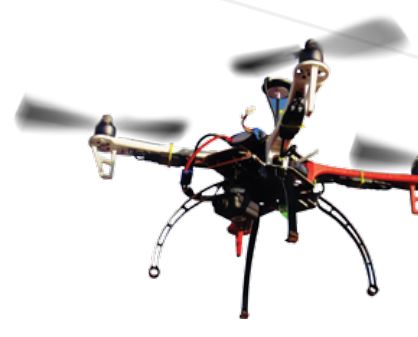 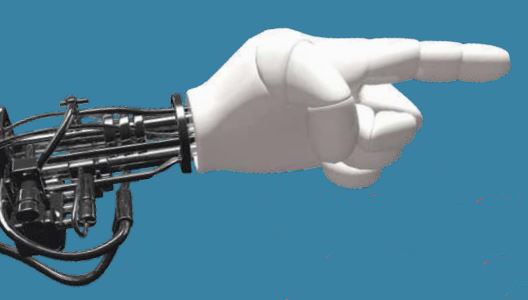