Nardev Ramanathan leads Lux Research’s coverage of the Digital Health and Wellness and is a key contributor to the Digital Transformation and Consumer Choices in Food, Health and Wellness programs. Nardev has deep expertise in genomics, digital therapeutic products (digiceuticals), and personalised health solutions. Prior to joining Lux, Nardev was Assistant Head of the Industrial Development Group at the Agency for Science, Technology and Research (A*STAR), Singapore where he was the Precision Medicine and Digital Health lead. In that role, he helped develop an industry consortium to support the local biotech ecosystem for Precision Medicine related initiatives in Singapore. Nardev received his PhD in Clinical Biochemistry from the University of Cambridge under the A*STAR Overseas PhD scholarship. For his doctoral thesis, he identified a novel genetic mutation that leads to a rare inherited disease called lipodystrophy in a patient in the Middle East and further went on to elucidate the molecular mechanism underlying the disease.

What is precision medicine?

Precision medicine has been a buzzword for many years now. You just have to open up your social media feed, or if you’re still in denial of the digital age, maybe your hardcopy newspaper, and you will find the term ‘precision medicine’ generously sprinkled over any article that speaks about the future of healthcare. So, what really is it? And is this something you should really take note of? Or is it just one of those buzzwords you should disregard as noise and move on?

The National Institute of Health (NIH), United States of America, defines precision medicine as “an emerging approach for disease treatment and prevention that takes into account individual variability in genes, environment, and lifestyle for each person.” In simple words, it’s a personalised approach to medical care that takes into consideration an individual’s unique features and needs, as opposed to the current ‘one size fits all’ approach.

Why is precision medicine important?

Many pharmaceuticals today are not treating patients as effectively as they were intended. Certain drugs such as Advair Diskus for asthma and Copaxone for multiple sclerosis effectively treat less than 10% of all patients it’s prescribed for. This is because the clinical trials with those drugs were done on subjects often not representative of the global population that takes it.

Besides just drugs, even the same disease in different populations can be presented quite differently. A wellknown example is that of “lean diabetics.” The average Asian diabetic is lean compared to his or her European or North American counterpart. The Asian diabetic also presents different risks. In Singapore, a study done on 60,000 ethnic Chinese found diabetics to present a threefold increased risk of mortality from liver disease compared to a non-diabetic obese individual. This single use case suggests how a different approach in addressing the same disease is crucial.

Genomics – an up and coming discipline within precision medicine

While there are many disciplines that contribute to precision medicine, one of the major ones today is genomics, an up and coming field that has made tremendous progress over the last two decades. From approximately costing USD$3 billion to sequence the first human genome almost twenty years ago taking more than ten years, today the human genome can be sequenced in days for less than USD$1,000, making it possible, for the first time to unlock the human genetic blueprint at a population level. The unique information that can be unlocked on drug allergies and metabolism can now be made available to healthcare systems for personalised treatments. The United Kingdom’s National Health Service (NHS) has in fact been the first national level precision medicine initiative that sequenced 100,000 genomes at scale.

Interestingly enough, Asian genomic data is scarce, representing only 15% of all available genomic data in 2016 (see Figure 1). Two out of every three people on this planet live in Asia, yet genomics efforts have hardly kept up with this demographic reality. 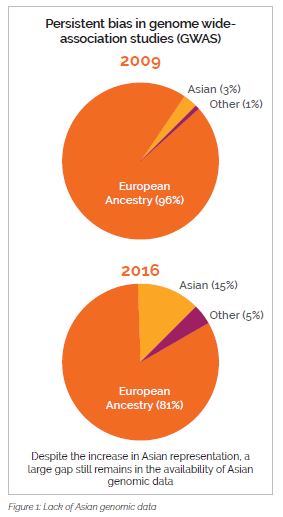 What are some ways we can address this huge discrepancy in Asian genomic data?

Lux Research has studied this space and found some interesting strategies being employing to address this gap:

Singapore and China are already embarking on precision medicine strategies at a national level and are looking for industry partners to collaborate. Singapore for example has partnered with WuXi NextCode, a leading Chinese bioinformatics company. The Chinese government has partnered with Huawei and WuXi AppTec, a Chinese pharmaceutical to build the cloud infrastructure platform necessary to support its large-scale precision medicine initiative.

Centrillion Biosciences, an American DNA Chip maker and WeDoctor of China established a joint venture in July 2018 to provide DNA chips and genomic analysis services to patients and consumers.

Advanced Genomics Solutions (AGS), an American company with a CAP and CLIA certified laboratory in Hong Kong offers direct-to-consumer genetic testing services, and a bulk of their business stems from South-East Asia, currently an underserved market. Prenetics, a Hong-Kong based company that recently acquired UK based DNAFit, a genetic testing fitness company also addresses the Asian market for genetic services.

Much effort today focusses on data infrastructure and genetic services, which reflects the very early stage the genomic and precision medicine industry is currently at (Phase 1) (see Figure 2). Both the data infrastructure and the sequencing technologies are the first step in setting the stage to begin unlocking the human molecular blueprint, the genome. As more and more genomic data becomes available, data analytic capabilities will be needed to process the data and eventually integrate the information with clinical data (Phase 2). This presents another window of opportunity for companies to come in. Finally, in Phase 3, when enough information is available about large sections of the population, health and wellness solutions can be customised to the individual. 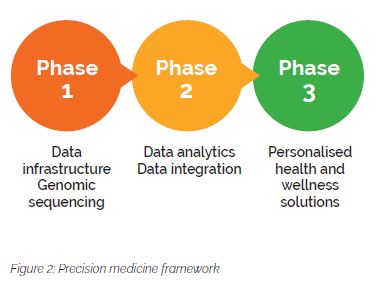 Challenges will persist, but as healthcare costs become unsustainable and people live longer, precision medicine is the way forward

Healthcare systems across much of the developed world have become unsustainable as treatment costs escalate and demographics shift with people living longer. In March 2019, the entire Finland government resigned over failed healthcare reform plans – a shocking announcement from a developed nation with a strong tradition of innovation. Current healthcare models must evolve, and precision medicine is the way forward.

There are challenges of course, most notably, around data privacy and security. There are sensitivities around accessing human genomic data both from an individual perspective and a governmental perspective. Individuals themselves may not be willing to want to have their genomic data made known and governments will be concerned about external parties coming in to extract such data which, in the wrong hands could lead to unscrupulous use that could target vulnerabilities in certain populations.

Hence, national level initiatives spearheaded by the government is a good way to attract interest from interested organisations and work with them in mutually agreeable way. Having these discussions from day 1, building relationships and developing a mutually agreeable framework with organisations that are aligned is a good way to start. Authorities can establish certain guidelines that protects the data privacy and security whilst still allowing companies to pilot certain ideas in a sandbox-type environment. With the governments in Asia typically playing a more central in the healthcare ecosystem in Asia, this will further have a trickle-down effect to local start-ups, pharma and biotech industry, spurring a more vibrant ecosystem around precision medicine. 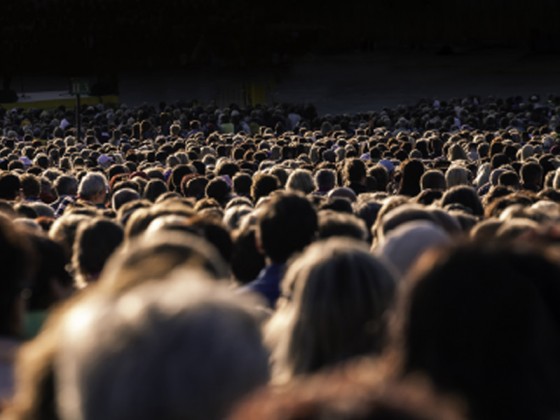