Global economic downturn especially in developed countries, has further prolonged current jobs recession. According International Labour Office (ILO), there is a backlog of global unemployment of 200 million – an increase of 27 million since the commencement of the economic crisis – more than 400 million new jobs will be needed over the next decade to avoid a further increase in unemployment. 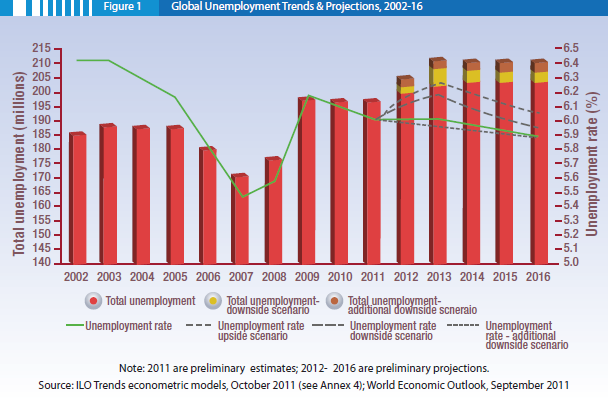 Against the backdrop of global scene, economic growth in Malaysia has been sustained at 4.7 per cent from 3rd quarter of 2010 until 1st quart
er of 2012 (source: Central Bank of Malaysia). Resilient economic growth plays an important role in churning jobs for Malaysian. The total workforce increased by more than 60 per cent from 7.6 million in 1995 to 12.2 million in 2010. The employment increased in the fourth quarter of 2009, but started to decrease in first half of 2011. The unemployment rate in Malaysia is averaged at 3 per cent, gauged by comparing the number of people actively looking for jobs against the total labour force. A matter of serious concern is on the high graduate unemployment rate which is over 20 per cent for arts/business, and 11 to 17 per cent for science, technical and ICT graduates. 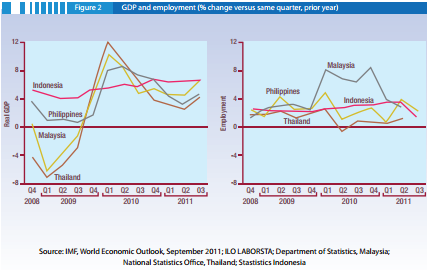 The number of skilled Malaysians living abroad has tripled over the last two decades. Two of every 10 Malaysians with tertiary education – almost all of them young adults – leave the country for Australia,the US, the UK and especially Singapore.

Based on study conducted by the World Bank on Malaysia, although jobs created in the past were for skilled professionals (high and medium skills), a large number of jobs available (about 44 per cent) is still low-skilled. Although there are a large number of vacancies of low-skilled jobs they are not appealing to Malaysians due to low salaries and uncomfortable working conditions. This resulted in a huge inflow of low-skill foreign workers, estimated at 1.8 million in 2010, to fill the gap.

If Malaysia’s competitiveness is still derived from low-cost labour instead of innovation or creativity, it will be trapped in the middle as new investments will flow to neighbouring countries with relatively cheaper workforce, and higher value activities remain in developed countries. To address this, The Government initiated the Economic Transformation Programme (ETP) that laid down a comprehensive plan to transform Malaysia to higher income nation (GNI per capital from USD 6,700 in 2009 to more than USD 15,000 in 2020). The implementation of projects under ETP is expected to generate more than 3.3 million jobs by 2020. However, abundance job opportunities created by the economic activities is not expected to totally eradicate unemployment, and shortage of skills and talented workforce will continue to be the major stumbling block in national development agenda.

There are a number of factors affecting theshortage of talent in Malaysia. Based on a studyby the World Bank, the major factors are:

a. High brain drain intensity. The number of skilled Malaysians living abroad has tripled over the last two decades. Two of every 10 Malaysians with tertiary education – almost all ofthem young adults – leave the country for Australia,the US, the UK and especially Singapore.

b.Lack of employability among graduates. A study on shortage of talent in Malaysia found that five (5) highest key restraints to hiring are: Lack of skill in information technology, English language, communication, creativity/innovation and technical training.

c. Shortages of top talent and highly skilled workers. Migration of skilled workers abroad due to more attractive remuneration and other incentives, especially in Middle East countries, has affected various sectors. The positions they left behind are left vacant for a period of time due lack of suitable candidates,thus hampering industry development. 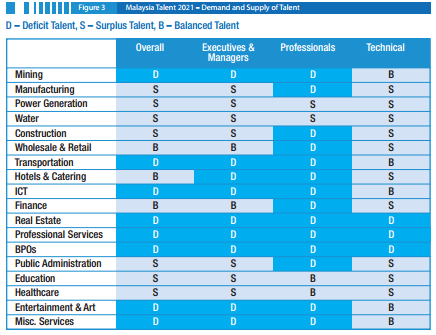 Oxford Economics, through its report on “Global Talent 2021”, provides a guideline to address future demand and supply of talent in Malaysia. The report analyses local talents status in 18 local sectors which are divided into three (3) categories: talent deficit, talent surplus and balanced talent. The requirement for workers with certain skills and knowledge may change with the evolvement of economic landscape. Malaysia’s economy has evolved from agriculture based to industrialisation and today, services sector is taking large portion of overall economic activities. Services sector constitutes more than 67 per cent, followed by manufacturing 29.5 per cent, and primary sector with 3 per cent of Malaysia’s economic activities.

Malaysia’s economy has evolved from agriculture based to industrialisation and today, services sector is taking large portion of overall economic activities.

The planning and production of future human resources for the country need to take into account opportunities and risks presented by the change and liberalisation of the market, new industries growth and employment needs. The advancement of technology is dynamic. It enhances productivity and, in turn, changes human job functions. According to McKinsey, advancement of automation technology will free workers to focus on more creative tasks and create new occupations. Therefore, investment in time and resources to “reskilling” is important for an organisation to stay competitive in future marketplace. In addition, high technology utilisation will enable organisations to tap on underutilised human potential such as workers with various disabilities.

Mismatch of demand and supply of talents has benefited people with special talent as there are demands worldwide. This minority group has ability to demand higher salary set their own terms and conditions. However, the vast majority who are unable to market their talent are not neglected by the government. Various initiatives such as education review and graduate employability blueprint to improve quality of education; new economic model and strategic reform initiatives to ensure availability of talent; labour law reforms for workforce productivity and Government Transformation Program (GTP) for improving the quality of life have been implemented. 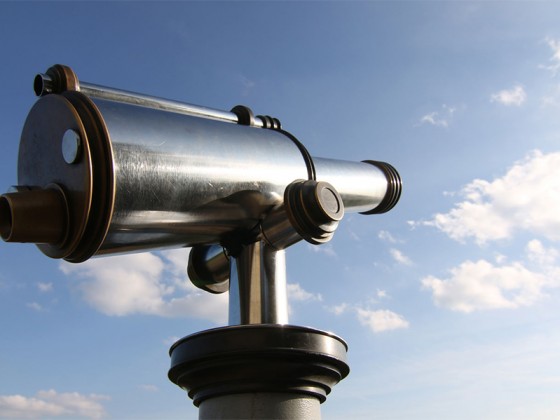 Foresight and Policy Modelling on ICT for Governance : Exploring The Next Frontiers 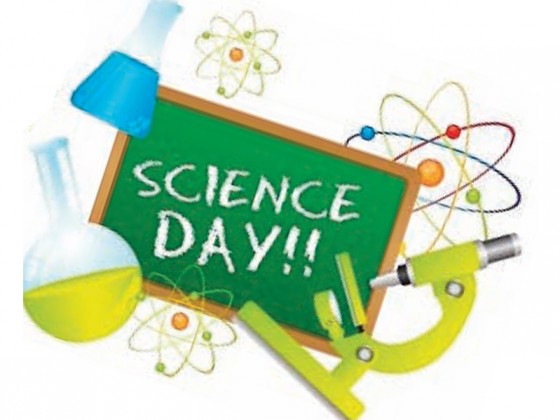