On the economic front, the weather has been quite tempestuous in the past few months with strong Western headwinds colliding with Easterly winds. Threats of tariffs and economic actions have materialised into tit-for-tat retaliations that are quickly unfurling into a potential trade war with massive worldwide impact. What began as a move from the United States (US) against China has now begun to escalate into US versus the world.

The actions we see today are not new. In fact, this is a pendulum swing to the past when wars among nations were fought not on the physical battlefield but on attacking what hurts the most—a nation’s economy

A snippet of trade wars 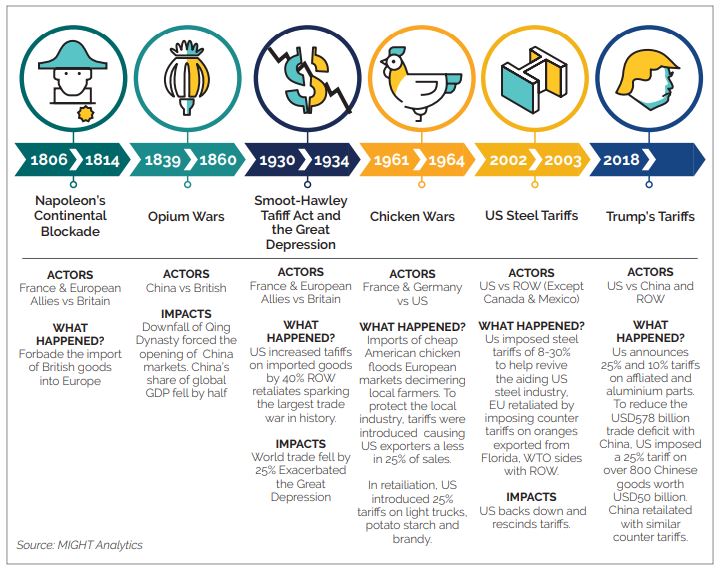 US imposed and proposed trade actions by item and counter-actions 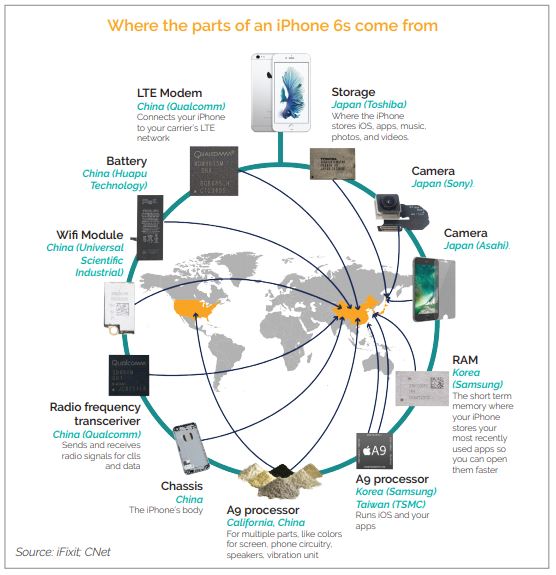 A tweet by US President, Donald Trump exclaiming that trade wars are good and easy to win is contradictory to what history has shown us. From agricultural products to construction materials, alcohol to automobiles; almost anything is fair game to a tariff in a trade war. Its reach is wide, the impacts range from short to long-term and could be as devastating as the fall of economies, governments and nations. Unquestionably, the biggest loser in all these trade wars are the consumers. People like you and I end up paying more for everyday items. A case in point is the soft drink Coca Cola. Less than a month after the new tariffs were announced by the Trump administration, Coca Cola has announced plans to raise soda prices in North America due to the rising costs of metals following  tariffs imposed on Chinese imports.

At this juncture, Malaysians reading this will be thinking of how will the impending US vs China trade war impact us here? We are after all 15,061 km away from US and 3,525 km away from China. In today’s world, distance no longer matters. Even more so in the world of manufacturing and implementation of Industry 4.0. Take for example your mobile phone. While it might say Samsung, Apple or Huawei on the casing, most if not all the components are not from the country the company originates. Case in point is the iPhone that is designed in California, US and assembled in China but its components are sourced from all over the world. With the economies of scale, China plays its role as final assembler to many of such products. Malaysia too is impacted by this global supply chain as China is our largest trading partner with exports amounting to USD29.4 billion or 13.5% of total global exports in 2017. On the other hand, Malaysia’s exports to the US in 2017 amounted to USD20.7 billion or 9.5% of total global exports. (Source: MATRADE External Trade Statistics, 2017).

A sizeable amount indeed. Hence, a potential trade war between these two countries will certainly impact Malaysia’s position as a global hub for supply, manufacturing and services of raw and intermediate goods. 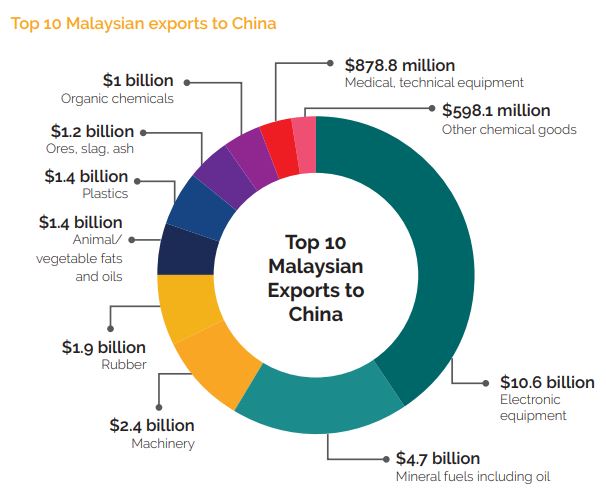 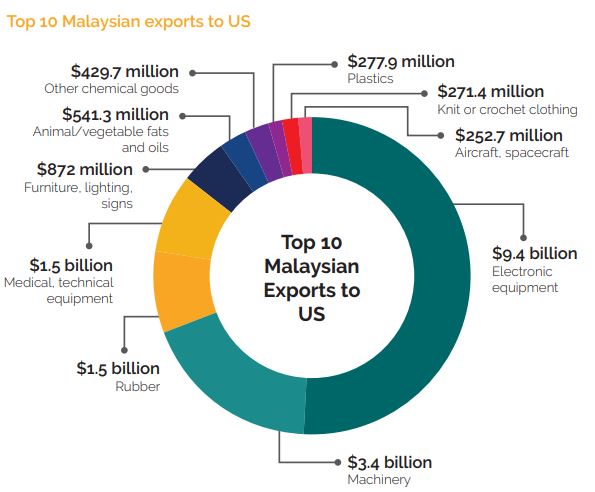 How then should Malaysia respond to brace this storm? As Peter Drucker once said, “every single social and global issue of our day is a business opportunity in disguise”. Hence, we should look for the silver lining in this dark cloud. There are many opportunities to be seized, gaps to be filled and risks to be minimised. How then can we grab this business opportunity as a Nation?

First, we need to prepare ourselves for when the opportunities arise. A grasp on how this situation could potentially play out will enable us to identify the opportunities that we can leverage on and the threats that we need to mitigate. Foresighted preparation is pivotal to implement policies, provide products and services and commit a Nation’s mindset to the rapid shifts that needs to be taken in these fast-paced changes.

In other words, we need strategic planning through scenario planning to expect the unexpected. Let us take for example a global scenario building exercise by ING done in March 2018 of how the trade war could escalate and its impacts on the global market. 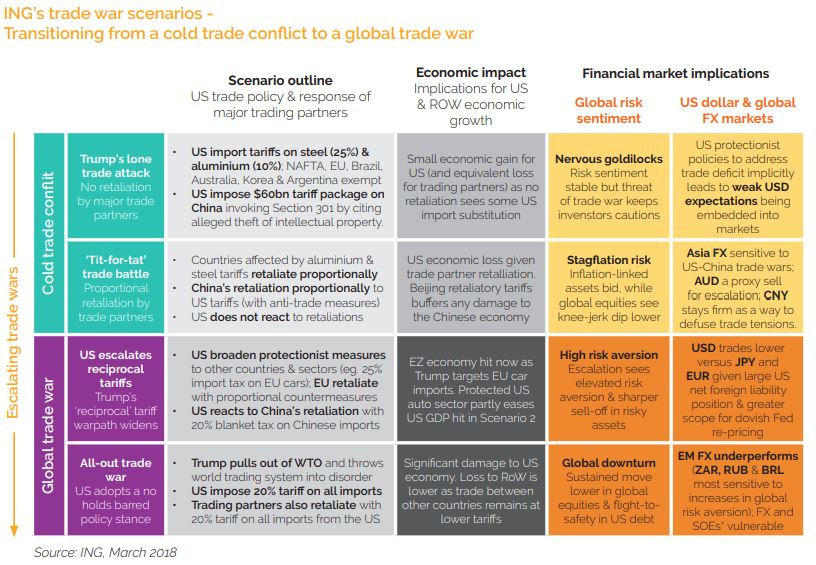 Based on current developments, we are currently (at time of writing) in Scenario 2: Tit-for-Tat Trade Battle but recent developments have shown that the situation is quickly escalating to Scenario 3 in a mere few months. In July, retaliatory measures from China has been enacted with the US announcing in August that it will further increase tariffs on USD200 billion worth of Chinese imports. While negotiations with the European Union (EU) have resulted in a temporary truce, negotiations are still ongoing and appear to be shaky. So, what does this all mean to Malaysia?

A recent meeting with Kumpulan Modal Perdana Principal/Senior Vice President; Mr Rustam Ku Azmi hypothesised that in in the long-run the trade war will create more opportunities for Malaysia’s Electrical and Electronics (E&E) industry. There will be intensified mergers and acquisition activities to acquire intellectual property (IP) or patents by China as an alternative to US for intermediate goods. Hence, these will spur innovation by private companies in Malaysia, increase economic participation and provide exit opportunities in the sector.

That is just a hypothesis of one possible future that could happen. In foresight, we often look at many possible futures to ensure we are ready to respond to almost anything and everything. Hence, several scenarios based on the global big picture could potentially play out as such for Malaysia: 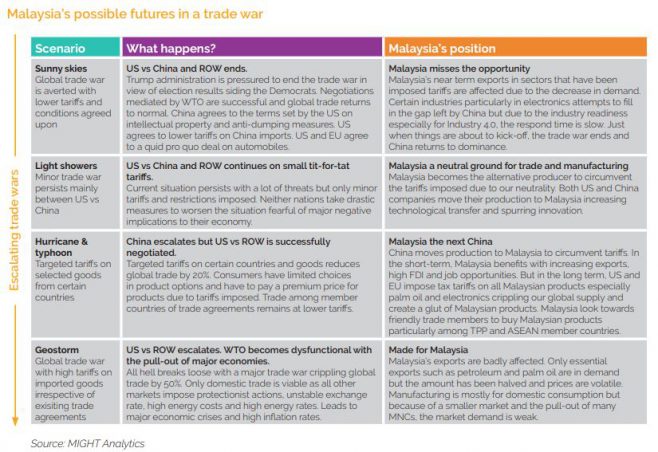 Knowing that these futures could possibly unfold, what is and should be Malaysia’s next move? Without a doubt, we need to start preparing ourselves today. As the saying goes, “time and tide wait for no man”. Changes are happening at a rapid pace than ever before. We need to identify the opportunities to be taken and threats to be mitigated today. For certain, Industry 4.0 readiness is important in ensuring we can brace ourselves for the oncoming storm. Government, industry, academia and civil society need to accept and adopt best practises now to ensure we are prepared for this. So, how will you brace the storm?

Author’s comments: This article serves as an eye opener on how future scenarios could possibly unfold on the burning topic of US vs China trade war. Further investigation is ongoing on the matter and will be delved further in future publications. 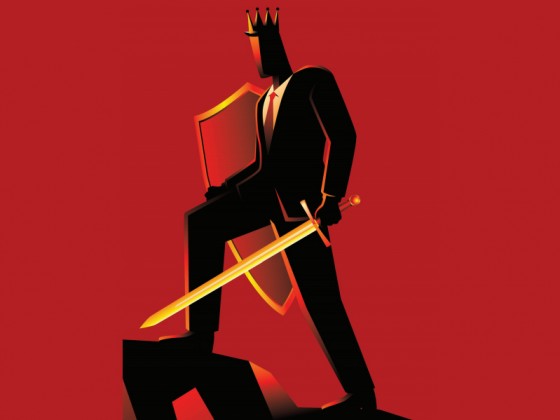 Leadership 4.0: All Hail The Future King Empathetic Leaders To Capture The Future 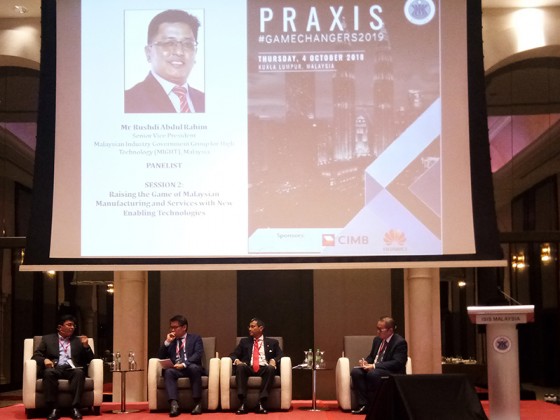