MIDA is the government’s principal investment promotion and development agency under the Ministry of International Trade and Industry (MITI) to oversee and drive investments into the manufacturing and services sectors in Malaysia. Headquartered in Kuala Lumpur Sentral, MIDA has 12 regional and 20 overseas offices. MIDA continues to be the strategic partner to businesses in seizing the opportunities arising from the technology revolution of this era.

The defence industry has been recognised as a key driver for the advancement of indigenous technical capabilities. The massive scope of the sector has encouraged the usage of high value added products, promoted linkages to supporting industries, generated employment opportunities, promoted exports, as well the development of dual use technology in contributing to the growth of the civilian economy.

Developing countries such as Indonesia, India, Turkey and South Africa have been aggressively pursuing defence industrialisation strategies to achieve higher technological and industrial developments, and now it’s time for Malaysia to shine.

Malaysia as an emerging economy, aims to undertake the same strategies for both military purposes and economic benefits. Decades of defence industry development have mainly focused on domestic self-reliance strategies in supplying spare parts, providing logistics support, modification, upgrades, retrofits as well as maintenance, repair and overhaul (MRO) activities. These are essential to ensure a continuous supply of weapons and a state of operational readiness of its armed forces assets.

The emergence of key players in Malaysian defence started in 1969 with the establishment of of SME Ordnance Sdn. Bhd. (then known as Syarikat Malaysia Explosive Sdn. Bhd.) to provide firearms and ammunition for the Malaysian Armed Forces. Over time, a number of local companies, armed with their own unique set of capabilities came into the defence scene as supply chain partners for Original Equipment Manufacturers (OEMs) and MRO service providers for military equipment, aircrafts, ships, and vehicles.

Throughout the years, government-linked companies and private enterprises have progressively upgraded and expanded their operations to provide specific defence products and services. DRB-HICOM Defence Technologies Sdn. Bhd. is one of the key players that have sound capabilities in assembling armoured and logistics vehicles. Continuous improvement and successes propelled them into the domains of aerospace, composite structures, unmanned systems, and system integration.

In the field of defence electronics, Sapura Secured Technologies Sdn. Bhd., a Malaysian manufacturer of military standard electronic equipment, has harnessed the power of cutting-edge technology and capability to fully design, develop and manufacture products locally. Its tactical military radios are currently exported and used by military forces in the Middle East and North Africa.

Boustead Heavy Industries Corporation is another Malaysian entity with diverse interests in the defence, security and marine sectors. It is one of the leading defence contractors in Malaysia to have been listed on Bursa Malaysia. Its subsidiaries, Boustead Naval Shipyard, Boustead DCNS Naval Corporation, BHIC AeroServices and Contraves Advanced Devices are notable players in the defence sector backed by a portfolio of activities ranging from shipbuilding, manufacturing of electronics components and MRO of naval vessels, submarines, military helicopters, and weapon systems.

Another significant player in the aerospace and defence industries is National Aerospace & Defence Industries Sdn. Bhd. (NADI). With subsidiaries such as AIROD, AIROD Techno Power, AIROD Aerospace Technology Sdn. Bhd., Aerospace Technology Systems Corporation (ATSC) and SME Aerospace which provides MRO services and activities such as aircraft modifications and upgrades as well as manufacturing of aerospace parts and avionics.

NADI’s reputable technical competencies in providing MRO services for military aircraft was evident by the appointment of its subsidiary, AIROD as an authorised Lockheed Martin C-130 Hercules aircraft service center as well as key success in securing a service contract in 2015 with the US Navy to repair a squadron of thirteen KC-130J aircraft which were based in Japan. Another subsidiary ATSC, has established a Sukhoi Technical Centre at the Royal Malaysian Air Force airbase in Gong Kedak, Kelantan. With this vital infrastructure to its name, ATSC was recognised as a one-stop centre for Su-30 MKM Fighter Jet MRO and a supply chain producer for all the systems incorporated in the aircraft including some non-Russian equipment.

A Quick Glance at Global Outlook and Opportunities

Despite challenges posed by the global COVID-19 pandemic, countries around the world had no qualms on spending their budget on strengthening and intensifying their military force, amidst some geopolitical tensions. So robust is the growth that global defence spending is expected to increase by 2.8 percent in 2021, potentially exceeding USD2 trillion.

Due to the significant cost associated with defence procurement, it is also paramount for Government defence contracts to be awarded to capable local industry players to further stimulate the domestic economy while minimising the outflow of currency. 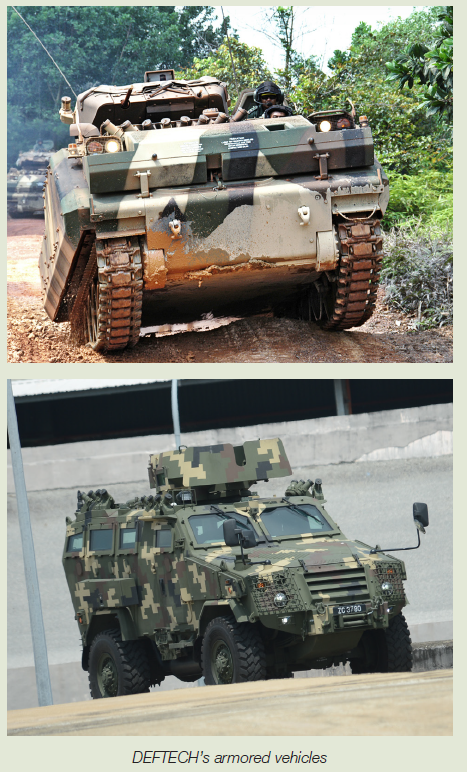 Malaysian defence industry players should take advantage of the market opportunities in the ASEAN region where member countries collectively spend about USD30 billion annually on defence requirements. Case in point: leveraging our established capability in aircraft MRO to tap into the regional defence market is very much in line with the aspiration of Malaysian Aerospace Industry Blueprint 2030 to become an aerospace hub in Southeast Asia.

Undoubtedly, Malaysia aims to be the preferred global outsourcing centre, particularly for OEMs and Tier-1 companies in the defence industry. In line with making Malaysia captive outsourcing hotspot, MIDA’s various efforts and facilitation in evaluating tax incentives, import duty exemption on machinery, equipment and components as well as funding schemes have assisted local defence industry players with the implementation and expansion of their projects.

The Malaysian Government is committed to support the domestic defence industry with the goal of developing high technology products while encouraging and facilitating joint ventures with foreign companies n the defence sector. The long-standing industrial expertise of foreign defence industry players will definitely benefit Malaysian companies’ when it comes to building capabilities, enlarging capacity and evolving new market access for locally built products.

MIDA has always been on track with their comprehensive supply chain initiatives. In 2018, MIDA organised an Industrial Linkages Programme for the aerospace sector in Turkey that enabled Malaysians companies to explore business and investment opportunities through strategic partnerships and joint ventures. The participating Malaysian companies were also exposed to best practices in the industry to help gain competitive business edge in the global landscape.

As the principal investment promotion agency of the country, MIDA supports local industry players in their bid to undertake quality investment projects through fiscal and non-fiscal incentives in technology development. To mitigate impacts of the pandemic on businesses while adapting to the new normal, Malaysian defence industry players need to review business strategies, industrial footprints and operating models to sustain their operations. Re-examining production technologies and understanding the national importance of Industry 4.0 transformation, MIDA actively promotes local industry players to incorporate Industry 4.0 technologies such as connected tools, Big Data, virtual reality and additive manufacturing to step up the pace in increasing manufacturing and operational effectiveness as well as flexibility of the entire production chain.

Productive consultations between MIDA and key stakeholders in the defence industry such as the Ministry of Defence (MINDEF), the Technology Depository Agency (TDA) and the Ministry of International Trade and Industry (MITI) are necessary to formulate the Dasar Industri Pertahanan Negara. This helps to identify gaps in the defence industry ecosystems, capacity building for domestic players and enhancing the effectiveness of current initiatives, such as the Industrial Collaboration Programme, to ensure sustainable growth of the Malaysian defence industry.

BIOWARFARE: JUST BECAUSE YOU CAN, DOES IT MEAN YOU SHOULD?

FROM THE DESK OF DATUK DR MOHD YUSOFF SULAIMAN

Lessons from the Pandemic

COVID19 acts as a catalyst on global transitions